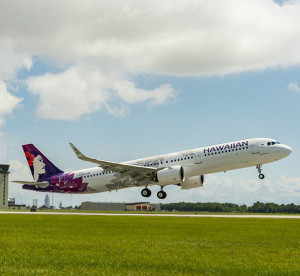 Hawaiian Airlines has taken delivery of its first U.S. produce A321 – also the first aircraft in the NEWO (new engine option) to be delivered from the Airbus U.S. manufacturing facility in Mobile, Ala.

Hawaiian Airlines has taken delivery of its first U.S.-produced A321.

The aircraft, delivered from the Airbus U.S. Manufacturing Facility in Mobile, Ala., is also the first new engine option aircraft (NEO) delivered from Airbus’ U.S. facility. It is powered by a Pratt & Whitney PW1000G high-bypass geared turbofan engine. Executives and employees from Airbus and Hawaiian, and executives from Pratt & Whitney and UTC Aerospace Systems witnessed the milestone delivery.

“Airbus understands the challenging airline marketplace and has continued to stay on the cutting edge of developing and producing aircraft that exceed industry standards in safety, efficiency and reliability,” said Bob Lekites, executive vice president – customers, Airbus Americas. “Hawaiian has recognized the Airbus commitment to innovation and we could not be more proud to deliver on this promise to them with our first U.S.-manufactured A321neo aircraft.”

Hawaiian Airlines Executive Vice President and COO, Jon Snook, was also on hand for the delivery.

“We are honored to accept the delivery of the first A321neo from the Airbus Manufacturing facility,” said Snook. “The A321neo is the ideal aircraft for us to share our Hawaiian hospitality with more guests as we grow our western U.S. network and provide greater access to our entire island chain. We look forward to more deliveries from Mobile.”

Hawaiian currently offers daily non-stop A321neo flights from Portland and Long Beach to Honolulu. The carrier will announce additional A321neo routes between the U.S. West Coast and the Hawaiian Islands as it welcomes a total of 18 aircraft through 2020.

Demonstrating the adage “The Sun Never Sets on Airbus Manufacturing,” Airbus aircraft are now produced around the clock, 24 hours a day, at facilities in Mobile, Ala.; Hamburg, Germany; Toulouse, France; and Tianjin, China.