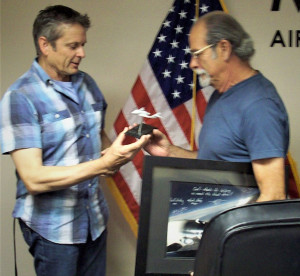 A distinctive deep voice separated Ingram from the typical voice a pilot might hear when calling an airport control tower. He was sometimes called ‘The Voice’ of Mojave Tower.

On behalf of Mojave Air & Spaceport, Drees thanked Ingram for his 12 and a half years at Mojave and offered best wishes for an enjoyable retirement as he and his wife move to North Carolina.

Ingram has been an air traffic controller for 48 years. He served in the U.S. Air Force from 1970 to 1990 and was stationed in base towers all over the world, beginning at McGuire Air Force Base, N.J.

Before coming to Mojave, Ingram worked the tower at William J. Fox Air Field in Lancaster.

The Mojave Transportation Museum Foundation presented a plaque to Ingram with appreciation for his help and support of Plane Crazy Saturday and the recent Mojave Experimental Fly-In. 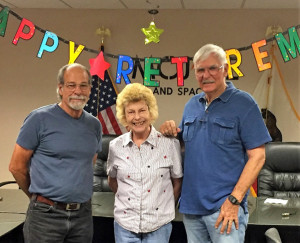 Virgin Galactic Chief Pilot Dave MacKay and Lead Test Pilot Mark Stucky were also on hand to offer their gratitude for Ingram’s help from the tower, during drop test flights and two powered flights of SpaceShipTwo Unity. A large print of SpaceShipTwo’s first powered flight, signed by crew members and a model of the spacecraft were presented to Ingram.

“We do amazing things here,” Stucky said, “It’s because of people like Carl that makes Mojave the place to get things done.”

“You are the epitome of what a control tower operator should be,” Rutan said. “You have a great attitude and I’m going to miss you a lot.”