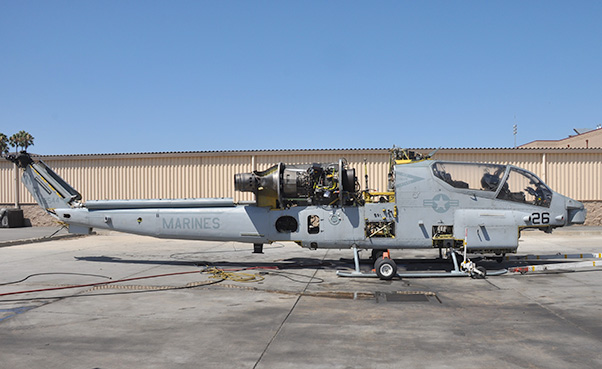 The last AH-1W Super Cobra helicopter to undergo the Integrated Maintenance Program (IMP) at FRCSW Site Camp Pendleton awaits further processing outside of the hangar. The aircraft was inducted July 18 from Marine Light Helicopter Attack Squadron 775 (HMLA-775), and is scheduled to complete the IMP by the end of September and return to the squadron.

Artisans at Fleet Readiness Center Southwest Site Camp Pendleton, Calif., marked the end of an era July 18 with the induction of the last AH-1W Super Cobra to undergo the Integrated Maintenance Program.

The H-1W is being retired and replaced with the newer H-1Z Cobra.

“The technology is more advanced in the Z than the W,” said Site Camp Pendleton manager Cary Mocanu. “It has better engines, and the airframe is more rigid and stronger. The W is primarily sheet metal where the Z is more cast aluminum parts.”

Manufactured by Bell Helicopter, the H-1W Cobra twin-engine attack helicopter was created for the Marines. For the past 32 years it has primarily been used in ground support missions and special operations.

The IMP was developed to keep the aircraft mission-ready by targeting the integrity of the airframe through two assessment events: Planned Maintenance Interval-one (PMI-1) and PMI-2.

Mocanu said that the H-1W PMI-1 occurs every 50 days at which time the aircraft are disassembled and evaluated.

Prior to PMI-1, the squadron removes the aircraft’s blades, and the site’s artisans remove the intermediate and tail gear boxes, panels, engines and the transmission and inspect those areas.

“The fuel cells and crew seats are removed and all of the oil, fuel and hydraulic systems hoses are also changed during PMI-1,” Mocanu said.

The H-1W PMI-2 cycle is held every 78 days with inspections similar to those of the PMI-1, except the aircraft are also stripped using a particle media blast (PMB) and painted.

The Site Camp Pendleton staff of approximately 40 artisans and 12 contractors have a paint and PMB facility which provides a faster return of aircraft to the squadrons.

Damages outside of the IMP scope are reported to the squadron and are ordinarily repaired as in-service repairs.

Mocanu said that H-1W ISRs averaged about 140 per year.

“A lot of those aircraft had the same discrepancies such as the transmission pylon channels, stub wing lugs, 214 bulkhead repairs, and landing gear supports. Many of these issues were the result of hard landings or fatigue to the airframe,” he said.

The H-1W IMP is scheduled for completion by the end of September when the aircraft will be returned to its squadron: Marine Light Helicopter Attack Squadron 775, 4th Marine Aircraft Wing.

Meanwhile, the artisans of Site Camp Pendleton will remain busy continuing IMP procedures to the H-1 Z and the UH-1Y Super Huey.

“We have plenty of work. We have Y and Zs coming up and should be putting out 40-50 aircraft a year within the next couple of years,” Mocanu said.