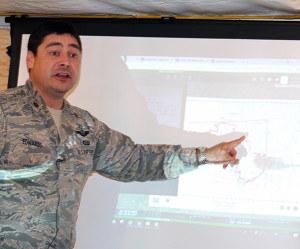 ANDERSON, Calif.–A critical aspect of fighting a raging wildfire, such as the Carr Fire in Northern California, comes from the skies and onto a sheet of paper.

A team from the California Air National Guard‘s 195th Airlift Wing is being used as a reconnaissance and surveillance unit, providing the state’s Department of Forestry and Fire Protection agency with up-to-date intelligence used to battle current wildfires.

“We’re able to provide real-time eyes on in any area where the fire’s at,” said Air Force Maj. Nicholas Edwards, intelligence a1

Working together
The California Guard team works side by side with CAL FIRE analysts. In about a week the wildfires have affected nearly 90,000 acres, destroying more than 500 homes and buildings and killing at least six people. Thousands of Redding residents have been evacuated.

The Guard’s contributions are “seriously helping us,” said Capt. Robert DeCamp, CAL FIRE intelligence officer. “The knowledge they have and the information they provide are critical for us to fight the fire. They have equipment we don’t have, and that helps us tremendously.”

Providing information
Twice daily, LeMaire and Ramos gather the drone’s information and provide printouts to CAL FIRE. The information is transcribed onto maps and other information products and are released to firefighters and emergency crews.

This information is used to track the fire’s movements so authorities can position defenses and notify the public if evacuations are necessary.

“This is one fire that’s very unpredictable, but we can track it with the capabilities the Guard provides us,” DeCamp said.