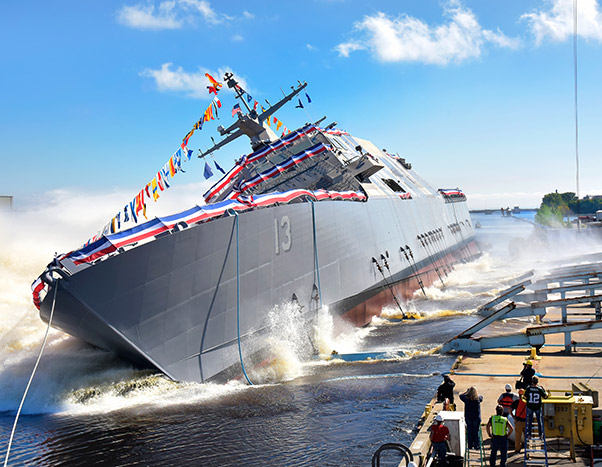 Sioux City and Wichita, respectively, are the 14th and 15th Littoral Combat Ships (LCSs) to be delivered to the Navy and the sixth and seventh of the Freedom variant to join the fleet. These deliveries mark the official transfer of the ships from the shipbuilder, part of a Lockheed Martin-led team, to the U.S. Navy. It is the final milestone prior to commissioning. Both ships will be commissioned later this year, Sioux City in Annapolis, Md., and Wichita in Jacksonville, Fla.

Regarding the LCS deliveries, Capt. Mike Taylor, LCS program manager, said, “The future USS Sioux City is a remarkable ship which will bring tremendous capability to the Fleet. I am excited to join with her crew and celebrate her upcoming commissioning at the home of the U.S. Naval Academy in Annapolis.”

“Today also marks a significant milestone in the life of the future USS Wichita, an exceptional ship which will conduct operations around the globe,” he said. “I look forward to seeing Wichita join her sister ships this winter.”

Capt. Shawn Johnston, commander, LCS Squadron Two, welcomed the ships to the fleet, saying, “The future USS Sioux City is a welcome addition to the East Coast Surface Warfare Division. Both her Blue and Gold crews are ready to put this ship though her paces and prepare the ship to deploy.

“The future USS Wichita is the first East Coast Mine Warfare Division ship,” he said. “She will have a chance to test some of the latest and greatest mine warfare systems after she completes her remaining combat systems trials.” 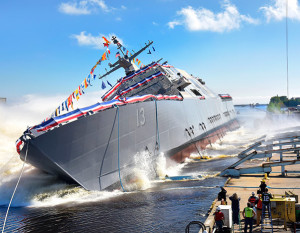 LCS is a modular, reconfigurable ship designed to meet validated fleet requirements for surface warfare, anti-submarine warfare and mine countermeasures missions in the littoral region. An interchangeable mission package is embarked on each LCS and provides the primary mission systems in one of these warfare areas. Using an open architecture design, modular weapons, sensor systems and a variety of manned and unmanned vehicles to gain, sustain and exploit littoral maritime supremacy, LCS provides U.S. joint force access to critical theaters.

The LCS class consists of the Freedom variant and Independence variant, designed and built by two industry teams. The Freedom variant team is led by Lockheed Martin (for the odd-numbered hulls, e.g., LCS 1). The Independence variant team is led by Austal USA (for LCS 6 and follow-on even-numbered hulls). Twenty-nine LCSs have been awarded to date, with 15 delivered to the Navy, 11 in various stages of construction and three in pre-production states.

Program Executive Office for Unmanned and Small Combatants is responsible for delivering and sustaining littoral mission capabilities to the fleet. Delivering high-quality warfighting assets while balancing affordability and capability is key to supporting the nation’s maritime strategy.