Ralph ‘Buz’ Sawyer received his nickname from the comic strip character “Buz Sawyer and Bomber 13” that was created by Roy Crane during World War II. The comic strip had a run of nearly 50 years, with the first strip appearing on Nov. 1, 1943. The character was a Navy pilot who flew the Douglas SBD dive-bomber Dauntless.

Our Mojave Airport ‘Buz’ worked as a flight-control and electronic technician at NASA (Dryden Flight Test Center) from the early 1960s until he retired in 1987. He worked on all of the lifting bodies that led to the design of the Space Shuttle while working at Edwards.

It had four airfoil-shaped parts: cockpit; curved member close to the sides of cockpit; the panel behind the prop, and the main lifting foils, each bordered by the end plates. There were ailerons on the trailing edges.

He designed the four airfoil shapes to provide as much lift as possible, with 14-foot-long end plates (painted orange) that were fitted with yaw control surfaces and provided directional stability. The end plates also increased lift by trapping the airflow that normally spilled off other aircraft wingtips.

To an average onlooker, it wasn’t an attractive, sleek and streamlined flying machine, but seemed more to resemble a flying, two-car garage door, with a hole cut out for the engine and prop, and a cockpit protruding out the front. 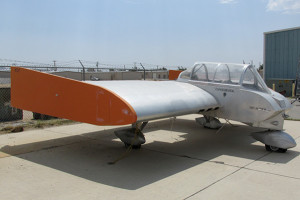 The Skyjacker sits abandoned next to the fence at Mojave Air and Space Port.

I found a photo of Skyjacker flying in the photo album that Dan Sabovich compiled when he was General Manager of the East Kern Airport District and Mojave Airport. It plainly shows the registration number N7317. It now sits abandoned next to the south fence that borders Mojave Air & Spaceport.

Skyjacker was designed to explore ‘ultra-low aspect ratio wing’ designs. Focusing on stability, controllability and capability was the mission of this project.

The only other person to fly Skyjacker II was FedEx commercial pilot Mike Carmack, Sawyer’s friend and business partner, who also believed in his concept and dream. He said that the super low aspect ratio wing flew with a high angle of attack. The intention of this low aspect ratio design was to make it easier to scale up to a larger aircraft. They wanted something with no complex curves and easy construction. Carmack said, “The airplane wouldn’t stall, it would just mush all the way to the ground.”

For non-engineer types like me, low aspect ratio means that the wingspan is unusually short compared to the chord or the distance lengthwise from the leading edge of the wing to the trailing edge. Thus, a long, narrow wing has a high aspect ratio, whereas a short, wide wing has a low aspect ratio.

Buz began with smaller models, made with cardboard and glue. There were four models ranging in size from a 12-inch glider, up to a six-foot, radio-controlled, twin engine example.

The manned version was a two-seat craft that measures 18-feet wide, 18-feet from the nose of the cockpit to the trailing edge. It’s a square wingless airplane! Weighs about 1,650 pounds empty or around 2,150 with a 200-pound pilot and 25 gallons of fuel.

He decided on an IO-360 Lycoming four-cylinder, air-cooled, 200-horsepower engine, with a constant speed, three-blade prop. It was slower than a Cessna 150 and the climb rate was only 250 feet per minute, at 75 miles per hour. 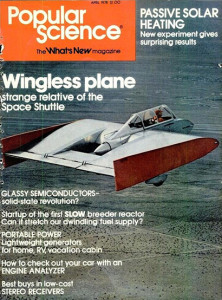 The cover of Popular Mechanics from April 1978.

“The full-size Skyjacker needed something way beyond the original Lycoming IO-360 he installed with a two blade prop,” said Richard Sawyer. “The three-prop configuration along with numerous modifications to improve the actual thrust only helped marginally.”

The unusual aircraft that was designed and test flown at Mojave Airport attracted lots of print media coverage and even appeared on the front cover of Popular Science — April 1978 issue, with a complete story on Page 82 by Ben Kocivar.

According to the article in Popular Science, Buz wanted the propeller to be in position to suck the air back over the center of the aircraft at a faster speed than just the normal airflow, which provided better laminar flow at slower speeds, thereby giving good lift.

I remember standing on the flightline at Mojave, thinking that the craft looked to be on the ragged edge of a stall the whole time it was in the air. After Buz landed, I remember someone asking him, “How did she fly?” Buz replied happily, “Flies great!”

Sawyer’s dream was to attract financing to build a flying machine that was twice the size of the Skyjacker II — a 36-foot prototype, with two turboprop engines!

“There actually was a 36’ wing span version under construction out at Mojave,” said Richard, “but situations changed during construction and it was eventually scrapped.”

Buz wanted the pilot and passenger to be totally enclosed inside the body, with a nose sticking out. However, he passed away in 1994, before his dream was completely realized. However, many agreed that he was researching a principle that needed to be explored.

There are many more stories to come from the early days at Mojave Air & Space Port!