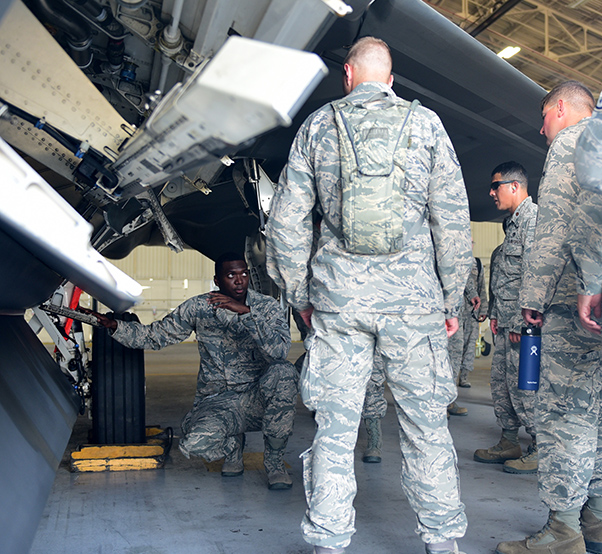 The exercise, conducted at Tyndall Air Force Base, Fla., with forward deployments to Moody Air Force Base, Ga., and Avon Park Air Force Range, Fla., served to validate an innovative way to deliver airpower lethality more effectively and efficiently anywhere in the world.

The CSW exercise kicked off with Airmen stepping out of their comfort zone to learn core skills from Air Force specialty codes other than their own, including flightline maintenance and operations, security, communications, and other agile combat support functions.

“Two years ago, the Combat Air Forces came to us with an idea: If we are in the Pacific or Europe, or operating in a hostile or denied environment, how would we be able to leverage the support forces to refuel and rearm jets? That was the challenge,” said Brig. Gen. Brian Bruckbauer, director of expeditionary support at the Air Force Installation and Mission Support Center, who served as exercise commander.

According to Bruckbauer, at AFIMSC’s inaugural Installation and Mission Support Weapons and Tactics Conference in 2017, a team of officers and NCOs proposed a concept that focused on multifunctional training that included Airmen learning different specialties to rapidly deploy, minimizing the number of personnel put in harm’s way, increasing the lethality of that small unit, and creating redundancies to bolster mission success. 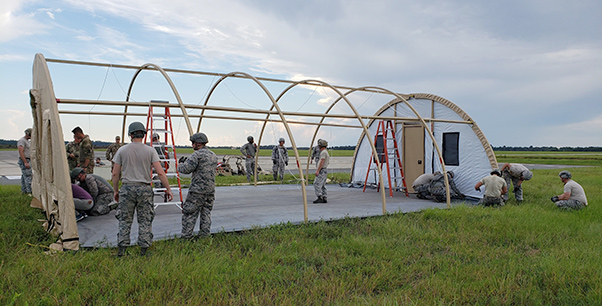 Airmen build a shelter for communications and operations activities 17 September during the Combat Support Wing exercise at Moody AFB, Ga. The 14-day exercise was conducted at Tyndall Air Force Base, Florida, with forward deployments to Moody AFB and Avon Park Air Force Range, Fla., to validate the CSW concept. Airmen stepped out of their day-to-day workload to train and prepare an airfield to receive aircraft by learning core skills in flightline maintenance and operations, security, communications, and other agile combat support functions.

“For example, engineers train on security forces tasks to minimize a footprint and come up with the right size (force) and the right amount of equipment needed at the forward location,” Bruckbauer said. “Then we actually put those support forces out at a location, ready to accept jets, refuel them and rearm them.”

The CSW exercise marked the second time this year the Air Force has tested this revolutionary concept. AFIMSC, Air Force Materiel Command and Air Combat Command have worked together to test the concept.

“The results from these exercises will continue validating the suitability of training a squadron of Airmen across the entire spectrum of combat support operations in order to provide on-call adaptive basing for flying operations wherever there is a need,” said Col. Erik Rundquist, AFIMSC Detachment 8 commander and CSW exercise director.

“The ingenuity of CSW is it leverages the Air Force’s best assets: its people,” Stanton said. “CSW tackles mission requirements in a different manner. It places emphasis on Airmen not only performing their core AFSC responsibilities but also those of their peers.” 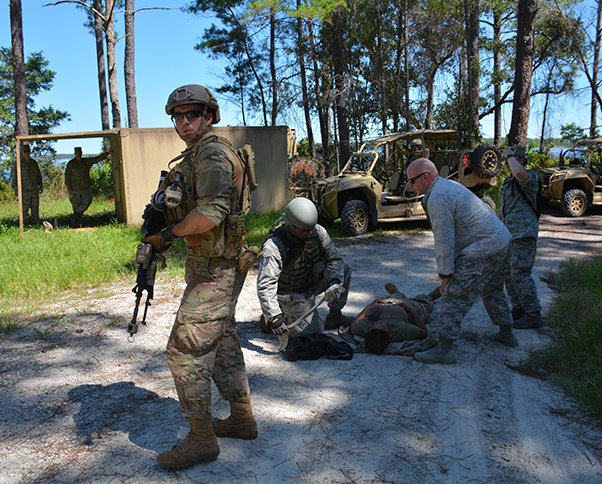 An Airman stands guard during a Combat Support Wing exercise scenario that trained and tested participants’ ability to provide combat first aid 16 September at Tyndall Air Force Base, Fla. During the two-week exercise, Airmen learned other Air Force specialty skills than their own to test a small team’s capability to conduct agile downrange support operations.

In addition to flightline maintenance and operations, warfighters received training in tactics such as advanced medical saving techniques, how to spot and secure an area with unexploded ordnance, and how to drive a multipurpose off-highway utility vehicle.

An F-22 weapons loader from Tyndall participated in the exercise and said he values the concept.

“I’ve received training and knowledge on other AFSC’s to help create a new type of Airman,” said Senior Airman Harold Gross III, a member of the 325th Aircraft Maintenance Squadron. “This new Airman is capable of employing not only their specific task, but those outside of their career field. This allows an Airmen to be more than just a maintainer or a security forces member, or even a civil engineer. He or she can be all three and more. My role during this exercise with CSW has been one of learning and adaptability.” 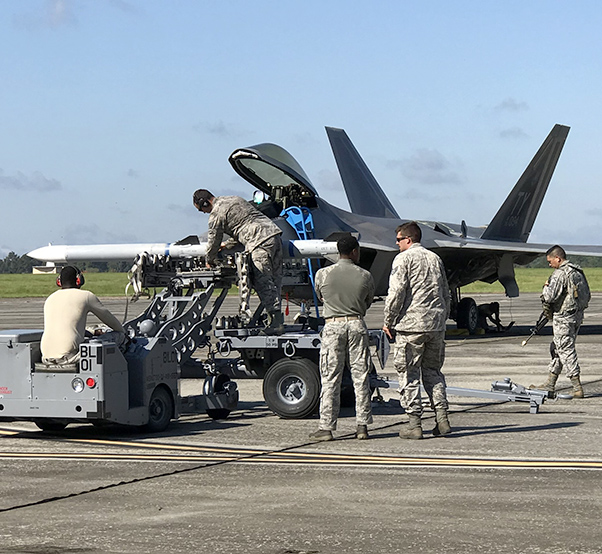 Airmen prepare simulated munitions during the Combat Support Wing exercise at Moody Air Force Base, Ga., on Sept. 18, 2018. Airmen trained and prepared for CSW concept by participating in various Air Force specialty skills such as flightline maintenance and operations, security, communications, and other agile combat support functions during the 14-day exercise.

“If I’m not capable of loading an aircraft for a mission, then the CE Airman next to me can,” he said.

Personnel from two dozen Air Force specialties learned from each other, plus a little bit about themselves, Rundquist said.

“Our Air Force has some of the greatest technology ever fielded,” he said. “When linked to its greatest weapon system, a well-trained and motivated Airman, we can really start to tackle some of the challenges that lie ahead. Most importantly, it will be amazing to see how tactical solutions developed by our young Airmen will help shape strategic decisions and capabilities for years to come.”

The Air Force is scheduled to test the CSW a third time at a capstone exercise in November again with Tyndall as the hub, and Duke Field, Fla., will be added to the scenario along with Moody and Avon Park as the spoke locations. 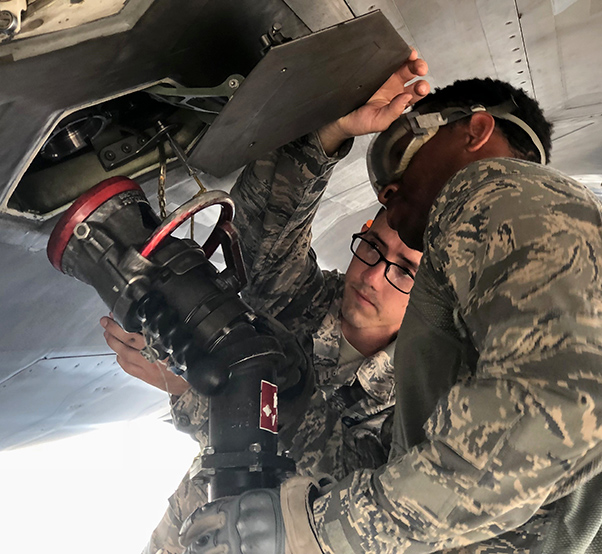 Staff Sgt. Cedric Koonce, assigned to the 78th Security Forces Squadron at Robins Air Force Base, Ga., along with two other Airmen get the fuel hose lined up for refueling an F-22 Raptor during the Combat Support Wing Exercise 18 September at Moody Air Force Base, Ga. Throughout the exercise, Airmen like Koonce received hands-on training of Air Force specialty skills other than their own to test a small team’s capability to conduct agile downrange support operations. 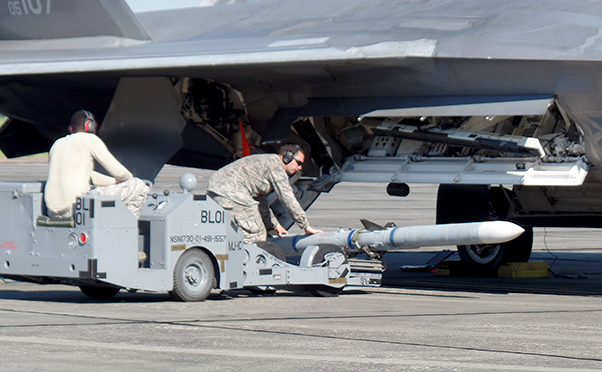 Airmen simulate arming an F-22 Raptor during the Combat Support Wing exercise at Moody AFB, Ga., Sept. 18, 2018. During the 14-day exercise conducted at Tyndall Air Force Base, Fla., with forward deployments to Moody AFB and Avon Park Air Force Range, Fla., Airmen had the opportunity to train and learn to prepare an airfield. The skill obtained were different than their own to receive aircraft, refresh ammunitions, refuel, provide security, initiate communications with home base, and provide medical attention to those injured or wounded.