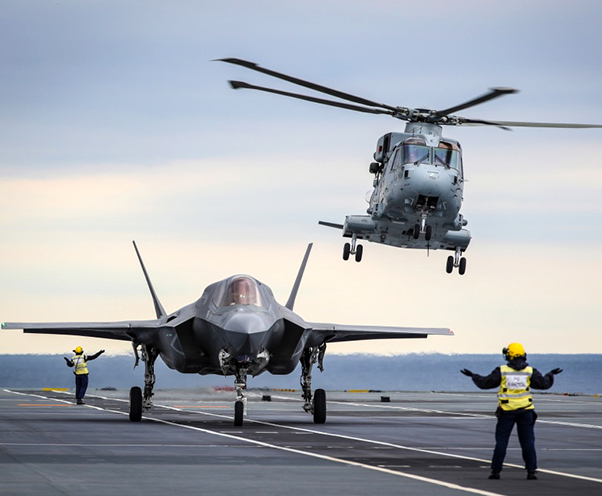 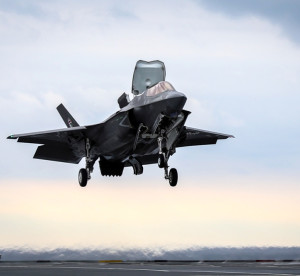 The first ever Shipborne Rolling Vertical Landing (SRVL) has been carried out with an F-35B Lightning II joint strike fighter jet conducting trials onboard the new British aircraft carrier, HMS Queen Elizabeth. The U.K. is the only nation currently planning to use the maneuver, which will allow jets to land onboard with heavier loads, meaning they won’t need to jettison expensive fuel and weapons before landing. Today’s landing, conducted by Peter Wilson, a BAE Systems UK test pilot with the F-35 Pax River Integrated Test Force, took place at exactly 10:30 a.m. Oct. 13, 2018, off the east coast of the U.S. Landing 755 yards back from the end of the carrier’s ski jump, the jet came to a complete standstill at the 580 yard mark.

The first ever Shipborne Rolling Vertical Landing was carried out Oct. 13, 2018, with an F-35B conducting trials onboard the new British aircraft carrier, HMS Queen Elizabeth.

The United Kingdom is the only nation currently planning to use the maneuver, which will allow jets to land onboard with heavier loads, meaning they won’t need to jettison expensive fuel and weapons before landing.

Previously the jets have conducted vertical landings, coming to a hover to the side of the ship, translating sideways over the deck, before gently lowering to land. It is regarded as a safer method to reduce speed before the jet lands in this way, rather than landing on at speed and coming to a stop before it runs out of deck.

An SRVL uses a different approach, with the jet using a more conventional landing pattern, approaching the ship from the aft end at speed, using the thrust from the nozzle and lift created by air over the wings, to touch down and come to a stop as soon as possible.

The first SRVL was conducted by Peter Wilson, a BAE Systems U.K. test pilot with the F-35 Pax River Integrated Test Force, and took place at 10:30 a.m. Oct. 13, 2018, off the east coast of the U.S. Landing 755 yards back from the end of the carrier’s ski jump, the jet came to a complete standstill at the 580 yard mark.

“I’m excited and thrilled to have achieved this, the whole team is,” Wilson said. “It’s an inherently risky maneuver. We have always understood it is safer to stop before you land than it is to land before you stop and the prime reason for that is that if something goes wrong with the airplane it is far better for it to be stationary than a rolling wreckage. I’ve worked on this for the past 17 years; it’s fantastic to know that it’s matched the modelling and simulation we have done over the years. I’ve flown over 2,000 SRVLs in the simulator, and am honored to have been able to do the first one onboard HMS Queen Elizabeth here today.”

As important as the pilot in the cockpit, was Royal Navy Lt. Christopher Mould who held the role of Landing Safety Officer (LSO) during Wilson’s flight.

Taking his place in a packed, but eerily silent FLYCO (Flight Control), Mould was the final say as to whether the jet could land. With seconds to go before touchdown, his call of “happy” allowed the historic landing to take place.

“I’ll admit, I was nervous; it was a pretty intense experience,” Mould said. “It’s the first time we’ve ever done it. As the independent checker, I have to make sure that what we are seeing in FLYCO, is also what the pilot is seeing and call it as I see it.”

Fellow test pilot onboard, U.S. Marine Corps Maj. Michael Lippert, F-35 Pax River ITF, said America was watching this part of the trials onboard the carrier particularly closely. The USMC, which also flies the F-35B variant, will join the ship when she deploys operationally for the first time in 2021.

“This is one of the main reasons we are here. It is of interest to the Service at large – we are learning from each other,” Lippert said. “I will have the honor of conducting the first SRVL at sea for the U.S. military, so I’m excited; it’s what we all join up for. This is truly experimental test flying.”

Commander Air, or ‘Wings’ onboard, Royal Navy Cmdr. James Blackmore, said: “It’s fantastic to have achieved this, absolutely brilliant. It was text-book, just what we expected. This is the first step in proving this capability; another milestone in aviation for the Royal Navy.”

Royal Navy Commodore Mike Utley, Commander U.K. Carrier Strike Group onboard, added, “What today’s milestone eventually means is that we will give our strategic leaders even more choice. Pushing this ever expanding envelope means we can achieve the effects they require from us. Yet again we have demonstrated the seamless cooperation between the U.K. and U.S., but more essential than that, is how it will translate into future operations.”

Edgell, who is also a test pilot at the F-35 Pax River ITF said: “I’m feeling an enormous release, two years of concern—have we missed anything? What did we not consider? It’s overtaken our lives, to make sure the outcome today was perfect. It couldn’t have gone better and it was obvious to anyone, we were watching a moment in history being made for Royal Navy aviation.

“Now we will focus on putting all four of our test pilots here through the same process to achieve the widest breadth of data possible,” continued Edgell.