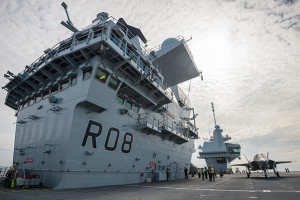 During the first few days of the First of Class Flight Trials (Fixed Wing) in September to October, the F-35 Pax River Integrated Test Force team worked on getting four ITF test pilots daytime qualified with two F-35B test jets from the ITF while embarked on the HMS Queen Elizabeth. The primary objective of the first round of FOCFT(FW) testing was to formulate a release to service recommendation to the United Kingdom for F-35B operational testing from Queen Elizabeth Class aircraft carriers.

On Oct. 16 British sailors and members of the F-35 Integrated Test Force at Naval Air Station Patuxent River, Md., completed a successful opening phase of the First of Class Flight Trials being conducted this fall aboard the UK’s new aircraft carrier, HMS Queen Elizabeth, near the U.S. eastern seaboard.

The first of three such phases to be held on the ship, the developmental testing (DT-1) aimed to generate enough flight test data to certify the F-35B Lightning II as ready for future operational testing aboard the ship.

“It has been a superb effort by everyone across the ITF and HMS Queen Elizabeth so far in the UK’s F-35B sea trials,” said Royal Navy Capt. Jerry Kyd, the ship’s Commanding Officer. “I could not be more pleased with the team spirit and dynamism from all that has delivered a volume of quality data which has put us well ahead of where we expected to be at this stage. I am very grateful to all the ITF folk who have been focused, professional and willing to go the extra mile—more to come!”

On Oct. 2, with winds over the deck exceeding 40 knots, the test team worked on wind envelope expansion conducting short takeoffs from the carrier’s ski jump along with vertical landings on the deck, which comprises a tower for the Bridge and a second tower for FLYCO (Flight Control). The team conducted the same maneuvers nine days later, but with winds on deck above 50 knots.

The first-ever shipborne rolling vertical landing (SRVL) of an F-35B came on Oct. 13, a movement the UK plans to use that allows the jets to land onboard with heavier loads, meaning they won’t need to jettison fuel or weapons before landing. Vertical landings on the ship were made by the jet coming to a hover to the side of the ship, translating sideways over the deck, and then lowering to land. The SRVL uses a more conventional landing pattern by approaching the ship from the aft end at speed and then using the thrust from the nozzle and lift created by air over the wings to touch down and come to a stop as soon as possible.

Three days after the first SRVL was made, DT-1 testing wrapped up and the aircraft returned to NAS Patuxent River. In all, across 38 total flights, the team conducted 98 short-takeoffs from the ski jump, 96 vertical landings and two SRVLs.

“It is humbling to be involved in setting the foundation operating envelopes that the Lightning will use to operate from the UK carriers for the next 40-plus years,” said Royal Navy Commander Stephen Crockatt, team leader of UK personnel embedded within the ITF at both Pax River and Edwards Air Force Base, California.
“With this combination the UK will have a formidable capability with true global reach.” 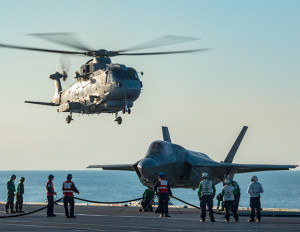 During the opening phase of the First of Class Flight Trials (Fixed Wing) being conducted this fall near the U.S. eastern seaboard aboard the UK’s new aircraft carrier, the F-35 Integrated Test Force from Naval Air Station Patuxent River, Maryland, achieved over 100 test points with several day and night short-takeoffs and vertical landings with minimal deck motion, in varying wind conditions and with and without internal stores.

The test team—comprising nearly 175 ITF members aboard the ship—completed several needed parameters during DT-1, including day and night short-takeoffs and vertical landings with minimal deck motion, in varying wind conditions and with and without internal stores.

“I’m very proud of the test accomplishments by the combined team of the 1,500 personnel comprised of the ITF, the carrier strike group and the crew of HMS Queen Elizabeth with her embarked 820 and 845 squadrons,” said Andrew Maack, the F-35 Pax River ITF’s chief test engineer. “It was impressive to see the excellent teamwork at all levels of the organizations.”

“It was great to see the Ship and the ITF working in harmony to efficiently get the best data possible,” he said. “Watching the HMS Queen Elizabeth and the Lightning come together as a single capability has been remarkable.”

Beyond the completed DT-1 test requirements—which were performed within the same flight envelope as will be used in the first operational test phase—the ITF also conducted about half of the testing that falls under the DT-2 threshold, or the flight envelope needed to reach initial operational capability (maritime).

The ITF returns to the ship in late October for DT-2, which will concentrate on external stores testing, minimum performance short-takeoffs and SRVLs, and night operations.

A third developmental test for FOCFT(FW), followed by operational testing, is scheduled for 2019. Together, the tests will help the U.K. Ministry of Defence reach F-35B IOC(M) in 2020.