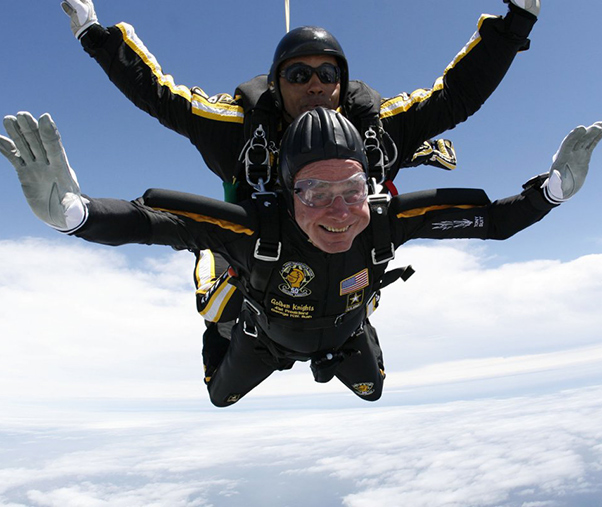 His background was a little different than most who join the military at the age of 18, but his warmth, love of country and drive to serve made him a leader respected up and down his chains of command.

Service members who worked with former President George H.W. Bush, first as Ronald Reagan’s vice president and, later, during his presidential term, spoke of the way he remembered their names and would ask about their families. They were loyal to him and he was loyal right back.

Bush himself said it best in his inaugural address on Jan. 20, 1989: “We are not the sum of our possessions. They are not the measure of our lives. In our hearts we know what matters. We cannot hope only to leave our children a bigger car, a bigger bank account. We must hope to give them a sense of what it means to be a loyal friend, a loving parent, a citizen who leaves his home, his neighborhood and town better than he found it.

“What do we want the men and women who work with us to say when we are no longer there? That we were more driven to succeed than anyone around us? Or that we stopped to ask if a sick child had gotten better, and stayed a moment there to trade a word of friendship?”

Bush, who died Nov. 30 at age 94, was born June 12, 1924, in Milton, Massachusetts. He graduated from Phillips Academy in Andover, Massachusetts, on his 18th birthday in 1942 and immediately joined the Navy. With World War II raging, Bush earned his wings in June 1943. He was the youngest pilot in the Navy at that time. 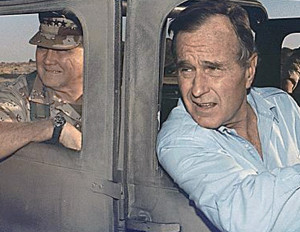 Flew torpedo bombers
The future president flew torpedo bombers off USS San Jacinto in the Pacific. He was awarded the Distinguished Flying Cross for a mission over Chichi Jima in 1944. Even though his plane was hit by antiaircraft fire, he completed his bombing run before turning to the sea. Bush managed to bail out of the burning aircraft, but both of his crewmen died. The submarine USS Finback rescued him.

After the war, Bush attended Yale and graduated Phi Beta Kappa in 1948. He and his wife moved to Texas, where he entered the oil business. Bush served in the U.S. House of Representatives from 1966 to 1970.

In 1971, then-President Richard Nixon named Bush as U.S. ambassador to the United Nations, where he served until becoming chairman of the Republican National Committee in 1973. In October 1974, President Gerald R. Ford named Bush chief of the U.S. liaison office in Beijing, and in 1976, Ford appointed him to be director of central intelligence.

Vice president, then president
In 1980, Bush ran for the Republican presidential nomination. Ronald Reagan won the primaries and secured the nomination, and he selected Bush as his running mate. On Jan. 20, 1981, Bush was sworn in for the first of two terms as vice president.

The Republicans selected Bush as presidential nominee in 1988. His pledge at the national convention — “Read my lips: no new taxes” — probably got him elected, but may have worked to make him a one-term president.

Bush became the 41st president of the United States and presided over the victory of the West. During his tenure, the Berlin Wall — a symbol of communist oppression since 1961 — fell before the appeal of freedom. The nations of Eastern Europe withdrew from the Warsaw Pact and freely elected democracies began taking hold.

Even more incredible was the dissolution of the Soviet Union itself. Kremlin hard-liners tried to seize power and enforce their will, but Boris Yeltsin rallied the army and citizens for freedom. Soon, nations long under Soviet domination peeled away and began new eras. 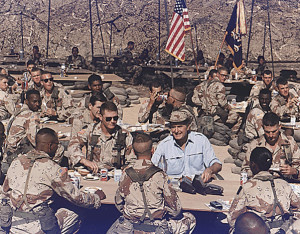 Military action
In 1989, Bush ordered the U.S. military in to Panama to overthrow the government of Gen. Manuel Noriega. Noriega had allowed Panama to become a haven for narcoterrorists, and he subsequently was convicted of drug offenses.

But Bush is best remembered for his swift and decisive efforts following Saddam Hussein’s invasion of Kuwait on Aug. 2, 1990. The Iraqi dictator claimed that Kuwait historically was his country’s “19th province.” His troops pushed into Kuwait and threatened to move into Saudi Arabia.

Bush drew “a line in the sand” and promised to protect Saudi Arabia and liberate Kuwait. He put together a 30-nation coalition that liberated Kuwait in February 1991. Operation Desert Storm showed Americans and the world the devastating power of the U.S. military.

At the end of the war, Bush had historic approval ratings from the American people. But a recession — in part caused by Saddam’s invasion — and having to backtrack on his pledge not to raise taxes cost him the election in 1992. With third-party candidate Ross Perot pulling in 19 percent of the vote, Bill Clinton was elected president.

Bush lived to see his son — George W. Bush — elected president, and he worked with the man who defeated him in 2006 to raise money for millions of people affected by an Indian Ocean tsunami and for Hurricane Katrina relief.

‘Freedom works’
In his inaugural address, the elder Bush spoke about America having a meaning “beyond what we see.” The idea of America and what it stands for is important in the world, he said.

“We know what works: freedom works. We know what’s right: Freedom is right. We know how to secure a more just and prosperous life for man on Earth: through free markets, free speech, free elections and the exercise of free will unhampered by the state,” he said.

“We must act on what we know,” he said later in the speech. “I take as my guide the hope of a saint: in crucial things, unity; in important things, diversity; in all things, generosity.”
It was the mark of the man. 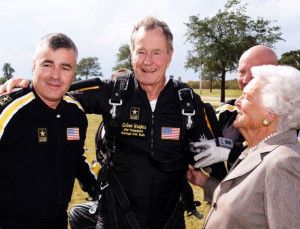 Trump joined countless others in paying tribute to Bush and his lifetime of service as a Navy pilot in World War II, congressman, ambassador to the United Nations, CIA director, vice president and president.

“Through his essential authenticity, disarming wit, and unwavering commitment to faith, family, and country, President Bush inspired generations of his fellow Americans to public service — to be, in his words, “a thousand points of light” illuminating the greatness, hope, and opportunity of America to the world,” Trump said in a statement released by the White House Dec. 3.

“With sound judgment, common sense, and unflappable leadership, President Bush guided our nation, and the world, to a peaceful and victorious conclusion of the Cold War,” he said. “As president, he set the stage for the decades of prosperity that have followed. And through all that he accomplished, he remained humble, following the quiet call to service that gave him a clear sense of direction.”

Defense Secretary James N. Mattis said Bush “took his experience in war to build a better world as our commander in chief. His service to our nation demonstrated how we as a people can draw on our humility, diversity and devotion to our country to meet every challenge with fortitude and confidence.”

“We will miss him, but at the going down of the day, his example will long guide our Sailors, Soldiers, Airmen and Marines for how to live life without regret,” Mattis said.

International leaders
All praised Bush’s steady hand on the tiller as the Soviet Union imploded and democratic government arose in Central and Eastern Europe. “When the Iron Curtain came down, the world needed politicians with visions and will,” wrote NATO Secretary General Jens Stoltenberg. “President George H.W. Bush was capable and committed. He seized the moment and shaped history. He will be remembered as one of the architects of the post-Cold War era and as a true trans-Atlantist.”

Bush was born into privilege, but was a true “servant leader.” “George H.W. Bush’s life is a testament to the notion that public service is a noble, joyous calling,” President Barack Obama wrote in a release. “And he did tremendous good along the journey. Expanding America’s promise to new immigrants and people with disabilities. Reducing the scourge of nuclear weapons and building a broad international coalition to expel a dictator from Kuwait. And when democratic revolutions bloomed across Eastern Europe, it was his steady, diplomatic hand that made possible an achievement once thought anything but – ending the Cold War without firing a shot.”

The man who defeated him in 1992 — President Bill Clinton — gave thanks for Bush’s “great long life of service, love and friendship.”

The two men became close while working together in the aftermath of Hurricane Katrina. “He never stopped serving. I saw it up close, working with him on tsunami relief in Asia and here at home after Hurricane Katrina,” Clinton said. “His remarkable leadership and great heart were always on full display. I am profoundly grateful for every minute I spent with President Bush and will always hold our friendship as one of my life’s greatest gifts.”

Perhaps the most fitting tribute was one of the shortest. On Twitter, the U.S. Navy posted a picture of President Bush with the words, “Fair winds and following seas, sir. We have the watch.”