Teachers across the Antelope Valley in Southern California gathered for a day at NASA Armstrong Flight Research Center to learn about three concepts: circuits, coding and robotics.

About 25 teachers attended the Educational Technology Institute and saw firsthand the current research projects taking place at Armstrong and how they relate to the three concepts.

It is no secret that the journey of a NASA employee begins inside the classroom. The Office of STEM Engagement (OSTEM) at Armstrong, is doing its part by providing NASA resources and materials to local teachers in the areas of STEM.

OSTEM holds a variety of NASA workshops and webinars for formal and informal teachers each year around the subjects of science, technology, engineering and math. The Educational Technology Institute marked the first time OSTEM decided to invite teachers to Armstrong’s main center at Edwards Air Force Base for an all-day event since the days of the Apollo 40th anniversary. 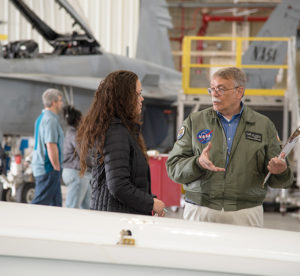 NASA Armstrong’s Chief of Maintance, Tom Grindle, gives a hangar tour to a group of teachers.

A portion of the day was dedicated to NASA’s first all-electric X-plane the X-57 Maxwell based at Armstrong. Claudia Herrera, mod 4 deputy chief engineer, of the X-57 shared with the group the mechanisms of the plane and the testing behind its power distribution system and its circuits.

The X-57 conversation connected with the course on circuit training, which was the favored topic among participants.

“The circuit training is hands-on, and we can go through this step-by-step with the kids really easily. I am going to need to do circuits especially since it is part of our testing,” said Kristin Deckner, fifth grade teacher at Golden Poppy Elementary.

Barbara Buckner, Armstrong’s educator professional development specialist, demonstrated how to easily create a paper circuit with simple tools teachers may purchase without breaking the bank for their classrooms. Teachers also participated in a group exercise to learn how our bodies are able to create a circuit. Participants held hands to form a human circuit to light up an electric ball. Since our bodies consist of nearly 60 percent water, participants were able to carry the electricity, an easy fun task for students to engage in the classroom. 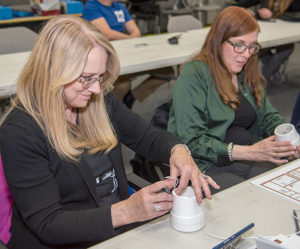 “I have done a lot of Barbie’s seminars, and I brought a lot of things she has taught us and demonstrated to the classroom,” continued Deckner.

Other discussions and activities included the Engineering Design Process, coding and programming, building a Styrofoam robotic arm, a demonstration of the Aeronautics Augmented Reality app, and a tour of Life Support and NASA Armstrong’s F-15 Hangar.