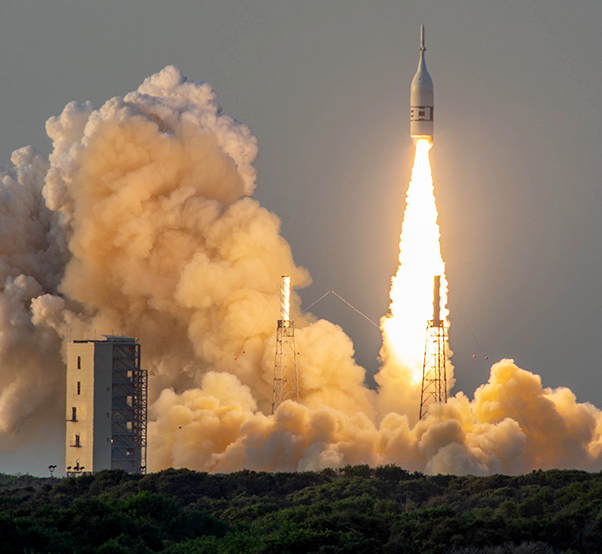 The Ascent Abort-2 test is a key milestone paving the way for human space flight aboard NASA’s Space Launch System. Orion and SLS are part of NASA’s exploration program to return astronauts to the moon and beyond to Mars.

“The flawless operation of spacecraft launch abort safety systems is critical to keeping our astronauts out of harm’s way,” said Blake Larson, president, Northrop Grumman Innovation Systems. “We are proud to play a role in ensuring crew safety and to contribute to this major step in America’s space exploration future.”

The ATB was provided to NASA under a contract with the U.S. Air Force’s Space and Missile Systems Center, and it is based on Northrop Grumman’s Minotaur family of launch vehicles. The AA-2 mission is led by NASA in partnership with SMC’s Launch Enterprise Systems Directorate (SMC/LE) and Rocket Systems Launch Program (SMC/RSLP), located at Kirtland Air Force Base, N.M. SMC/RSLP provided the refurbished legacy SR118 Peacekeeper ICBM first stage motor for the ATB.

AA-2 provided engineers with critical abort test data to help validate computer models of the spacecraft’s Launch Abort System performance and system functions. This test and the previous Pad Abort-1 test at White Sands Missile Range, N.M., on May 6, 2010, demonstrate that the LAS is ready to perform effectively during the most stressful missions.

Weighing approximately 16,000 pounds, the LAS can activate within milliseconds to pull the Orion vehicle to safety and position it for a safe landing. The LAS is comprised of three solid propellant rocket motors: the abort motor, an attitude control motor and a jettison motor.