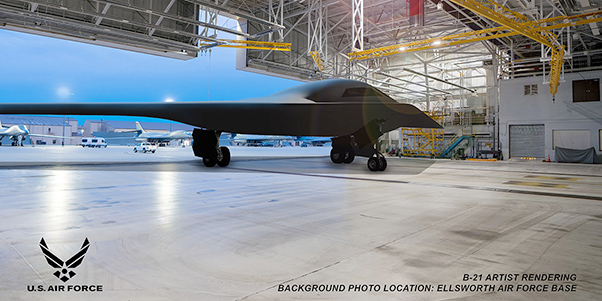 During his visit to the Palmdale facility, Wilson received a tour of the production line where the build of the initial test aircraft is currently underway and a briefing on the status of the overall program. Wilson also had the opportunity to meet with the workforce and praise their continued support and commitment to building the next-generation stealth bomber.

“The innovation demonstrated by this production line is as impressive as is the partnership between industry and government,” Wilson said during the tour, which also highlighted the contributions of Northrop Grumman’s partners to the initial test aircraft. “It truly is a nationwide effort to make this bomber a reality here in Palmdale.”

The B-21 Tier 1 suppliers were announced in March 2016 and include BAE Systems, headquartered in Nashua, N.H.; GKN Aerospace in St. Louis; Janicki Industries in Sedro-Woolley, Wash.; Collins Aerospace in Cedar Rapids, Iowa; and Spirit AeroSystems in Wichita, Kansas.