The strong and long-lasting partnership and shared noble effort between DPAA and the Ministry of National Defense Agency for Killed In Action Recovery and Identification to return the Korean War fallen made the ceremony possible. DPAA’s mission is to achieve the fullest possible accounting for missing and unaccounted for U.S. personnel to their families and our nation.

During the ceremony, three transfer cases were exchanged between DPAA and MAKRI. One transfer case, bearing the remains of a U.S. soldier, represented the six sets of remains repatriated to the U.S. from the care and custody of the ROK. Identifications of the six possible U.S. remains have not been made. They will be assessed into the DPAA laboratory for further work on identification. 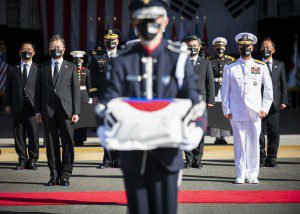 MAKRI received two transfer cases each containing the remains of a recently identified ROK soldier, recovered from the Battle of Chosin Reservoir area, representing the 68 sets of remains repatriated to South Korea. One of those Korean Soldiers identified had a family member attend the ceremony. Second Lieutenant Kim Hye-Su is a nurse serving in the ROK’s Army.

President of the Republic of Korea, His Excellency Moon Jae-In, was the principal speaker at the ceremony. He accepted the remains on behalf of his country. “American and Korean war heroes are finally returning home to their families after a 70 year long wait,” said His Excellency Moon Jae-In. “It is an absolute privilege to be the first Korean president to host the return of the fallen heroes.”

“Today we pay tribute to all Korean War veterans, and their families, for their service and sacrifice as they fought in battle to protect and defend our common values and the region,” said Aquilino. “May the enduring alliance and deep friendship between the Republic of Korea and the United States continue for generations.”

The remains were transferred between the ROK and U.S. through the United Nations Command (UNC). Initially flagged with the country in possession of each Service member. Honor Guards from the ROK, the U.S., and UNC solemnly and deliberately removed, folded, and replaced each flag. Which symbolizing the formal exchange between each country through UNC. After the Honor Guard loaded the respective remains, service members laid a wreath in honor of the fallen.

“Today’s joint repatriation ceremony is a testament to the strength of our two country’s partnership and the sustained cooperation and collaboration between MAKRI and DPAA,” said Banaji. “MAKRI’s recovery operations over the years in the Demilitarized Zone and on the Korean Peninsula resulted in discovering remains of more than a dozen U.S. servicemen.”

It is the incredible improvements in technology, advancements in forensic science, and the strong partnership between DPAA and MAKRI. Which has led to the identification of nine Americans from these efforts to date. The DPAA laboratory has provided extensive training to MAKRI’s scientific staff sharing the identification techniques, process, and challenges and forging the long-term successful collaboration between DPAA and MAKRI. DPAA and MAKRI historians regularly share case research to facilitate mission planning and case progression toward recovery.

In 2007, the two agencies solidified their bilateral partnership. The formal process of the Joint Forensic Review was developed accordingly. It provided an opportunity for both countries to review the potential U.S./ROK remains to decide the next course of action.

The bilateral arrangement between DPAA-MAKRI was updated in 2018. When the partnership quickly expanded beyond the lab to include joint efforts in operations and historical analysis. It led to numerous joint investigations and field activities in the Korean peninsula.

“Years of Joint Forensic Reviews between DPAA and MAKRI determined over two hundred sets of remains that were unilaterally turned over to the U.S. by North Korea were Republic of Korea servicemen,” said Banaji.

Today’s ceremony will likely be the last of such magnitude. It signifies the last of the 68 ROK servicemen in the care of DPAA. The strong partnership between DPAA and MAKRI will continue to thrive due to the shared values, missions; and objectives to search for, recover and identify missing service members.

To view the ceremony, please visit the archived link at: https://www.facebook.com/dodpaa

For additional information on the Defense Department’s mission to account for Americans who went missing while serving our country, or to see coverage of the wreath-laying ceremony, visit the DPAA website at www.dpaa.mil, find us on social media at www.facebook.com/dodpaa. 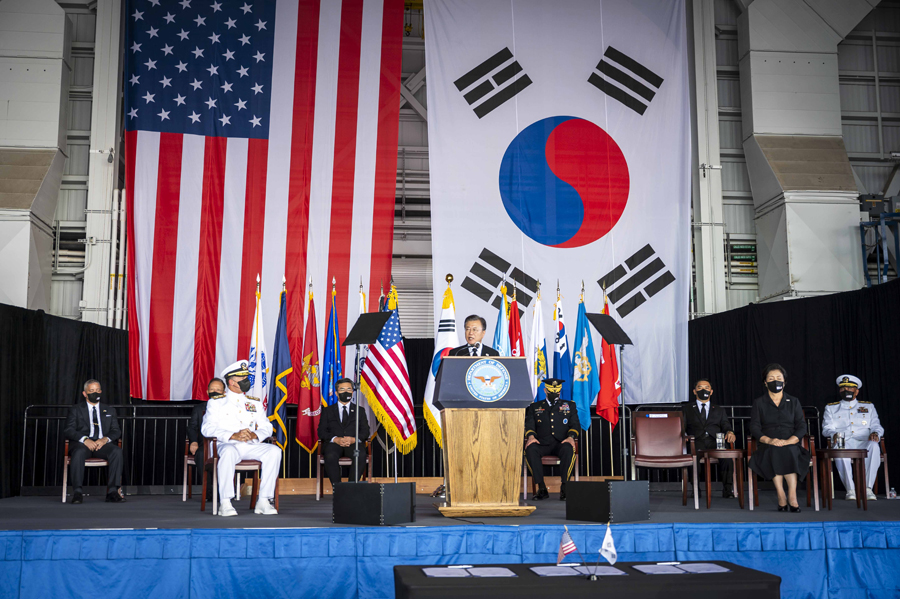