The Tomb of the Unknown Soldier is Arlington National Cemetery’s most iconic memorial. The neoclassical, white marble sarcophagus stands atop a hill overlooking Washington, D.C., Since 1921, it has provided a final resting place for one of America’s unidentified World War I service members. Unknowns from later wars were added in 1958 and 1984.

Through the ages, one of the consequences of warfare has been large numbers of unidentified dead. Unidentified remains resulted from poor recordkeeping, the damage that weapons of war inflicted on bodies, or the haste required to bury the dead and mark gravesites. In recognition of these sacrifices, the Tomb has served as a place of mourning and a site for reflection on military service.

Here is a brief timeline of the Tomb’s first 100 years. 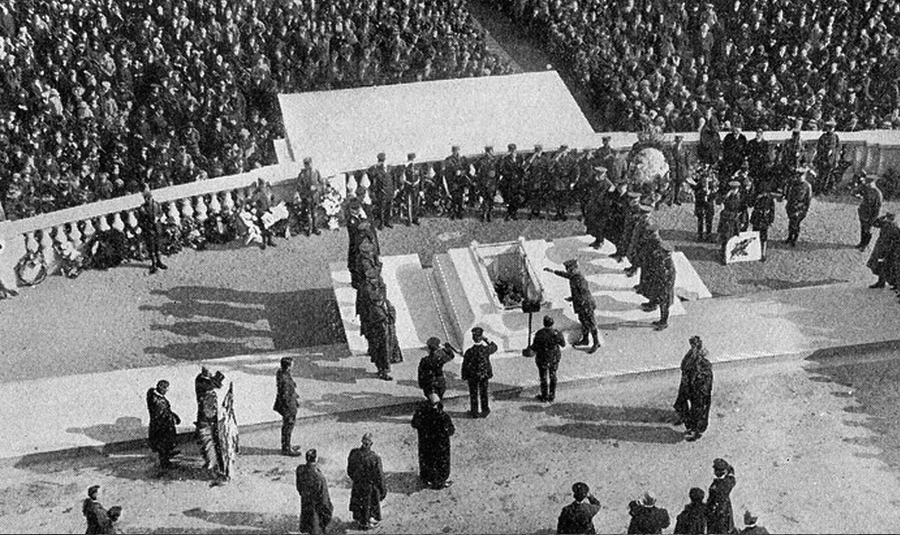 During World War I, our allies France and Great Britain did not return the remains of their fallen servicemen. Instead, to ease the grief of their citizens, France and Great Britain each repatriated and buried one unknown soldier on Armistice Day, Nov. 11, 1920. The United States, by contrast, did repatriate bodies at the request of service members’ families, if the remains could be identified. Unidentified remains, however, were not repatriated.

In December 1920, New York Congressman and World War I veteran Hamilton Fish Jr. proposed legislation that provided for the repatriation and interment of one unknown American soldier at a special tomb to be built at Arlington National Cemetery; this single unknown would represent all unidentified and missing American service members from World War I. The purpose of the legislation was “to bring home the body of an unknown American warrior who in himself represents no section, creed, or race in the late war and who typifies, moreover, the soul of America and the supreme sacrifice of her heroic dead.”

1921: The Tomb of the Unknown Soldier Is established

On March 3, the United States Congress approved the burial of an unidentified American serviceman from World War I, and President Woodrow Wilson signed into law the Congressional Joint Resolution the next day. The tomb would be constructed on the Memorial Amphitheater’s plaza.

In October, four unidentified U.S. military personnel were exhumed from four different American military cemeteries in France. The caskets arrived at the city hall of Ch‚lons-sur-Marnes, France, on Oct. 23. The following day, Sgt. Edward F. Younger of Headquarters Company, 2nd Battalion, 50th Infantry, American Forces in Germany, received the honor of selecting which one of the four would represent all World War I unidentified military personnel. Sgt. Younger selected the Unknown by placing a spray of white roses on one of the caskets.

On Oct. 25, 1921, the Unknown Soldier departed from Le Havre, France aboard the USS Olympia ó Admiral George Dewey’s storied flagship from the Spanish-American War. The Olympia arrived at the Washington Navy Yard on Nov. 9, 1921. On Nov. 10, the casket lay in state in the U.S. Capitol Rotunda, and more than 90,000 mourners came to pay their respects.

On Nov. 11, 1921, the Unknown was placed on a horse-drawn caisson and carried in a large ceremonial procession through Washington, D.C., and across the Potomac River to Arlington National Cemetery. At Memorial Amphitheater, President Warren G. Harding spoke at the state funeral ceremony and placed the Medal of Honor, the nation’s highest military decoration, on the casket. Numerous foreign dignitaries presented their nations’ awards as well. Nationwide, Americans observed two minutes of silence at the beginning of the ceremony, and thousands watched as the Unknown was interred in the Tomb of the Unknown Soldier.

At the time, the Tomb was not yet complete. A crypt was created for the funeral, with the intention that the rest of the Tomb would subsequently be created. 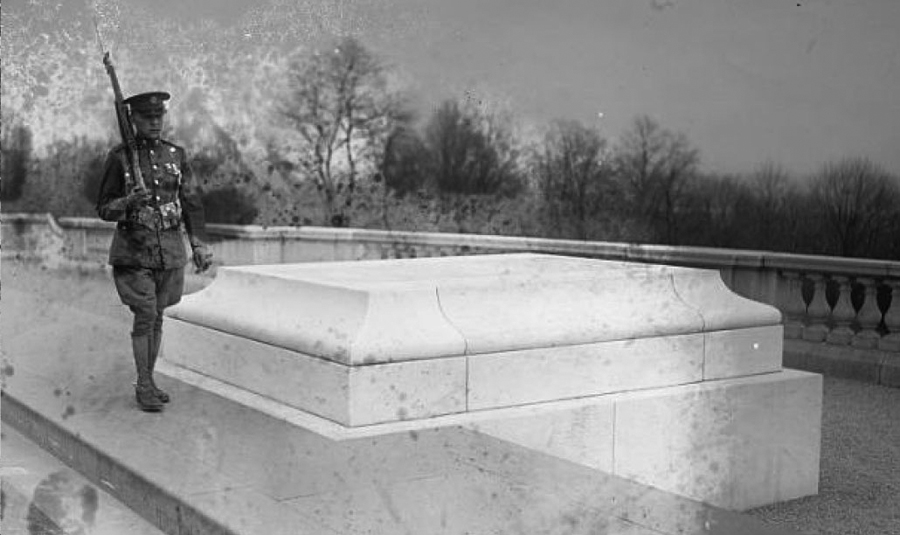 On Nov. 17, 1925, the Army ordered a civilian guard to begin daily duty at the Tomb in response to increasing reports of visitors’ disrespectful behavior. 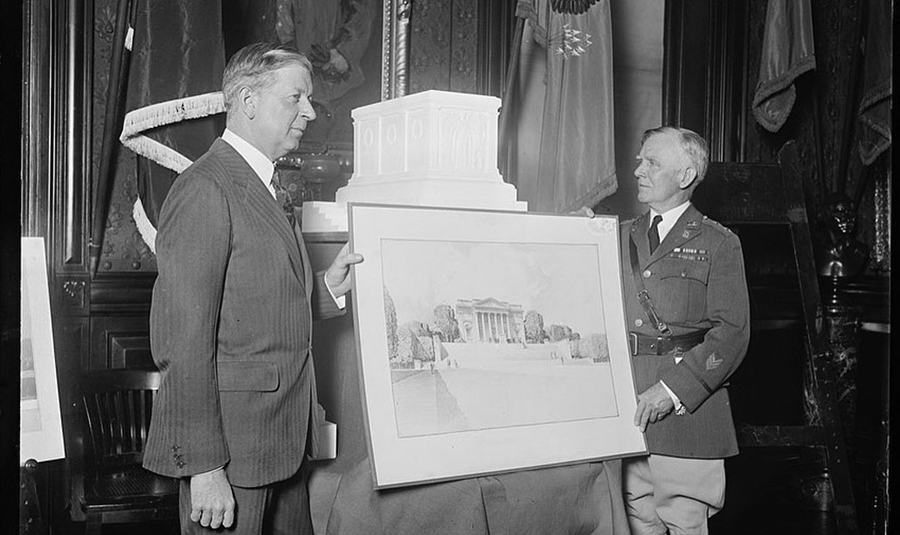 In March 1926, soldiers from nearby Fort Myer were first assigned to guard the Tomb of the Unknown Soldier. The guards, present only during daylight hours, discouraged visitors from climbing or stepping on the Tomb.

On July 3, 1926, Congress authorized the completion of the Tomb. 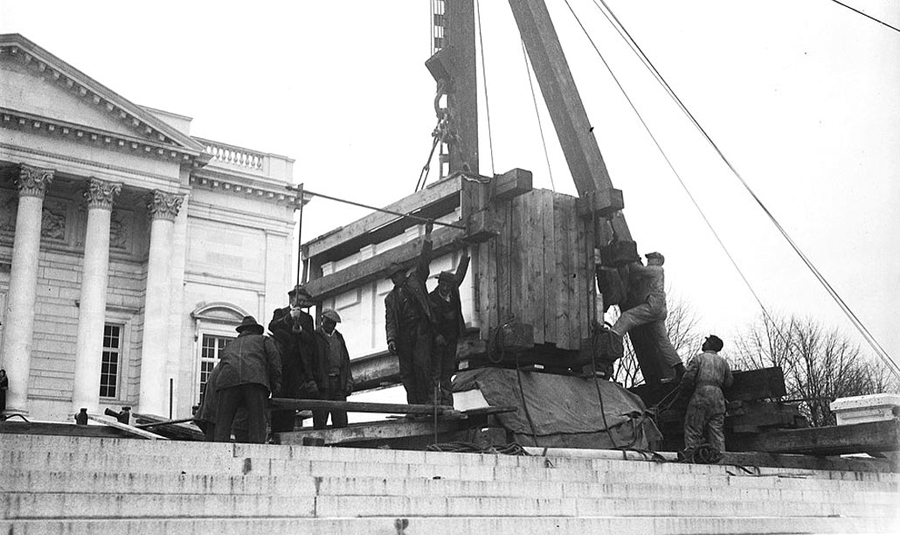 In December 1928, architect Lorimer Rich and sculptor Thomas Hudson Jones, both World War I veterans, won a nationwide design competition to design the completed Tomb. Over seventy designs were submitted. 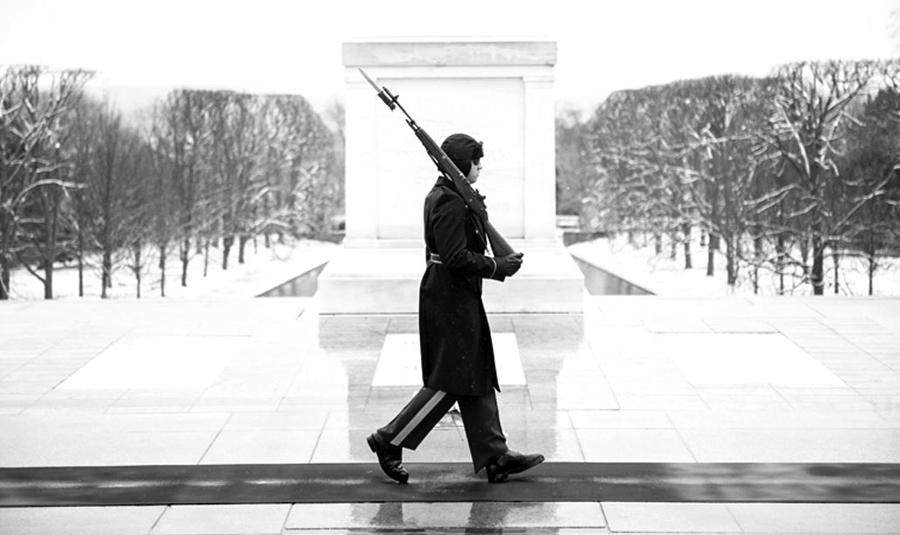 On April 9, 1923, the completed Tomb was unveiled. The marble sarcophagus features elaborate carvings of wreaths and three neoclassical figures representing Peace, Victory and Valor. On the side facing Memorial Amphitheater, its inscription reads, “Here Rests in Honored Glory an American Soldier Known but to God.” 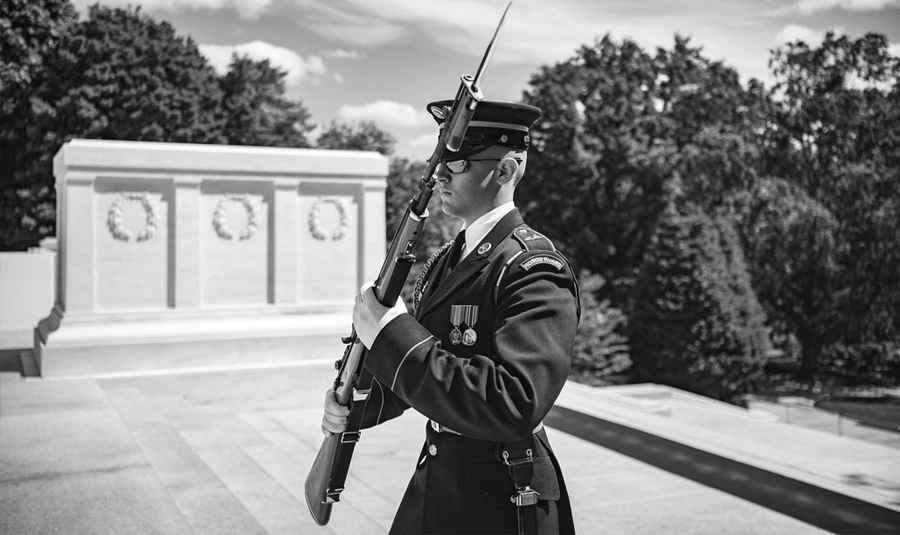 Effective July 1, 1937, the Army issued orders for the Tomb to be guarded 24 hours a day. Ever since then, the Tomb of the Unknown Soldier has been guarded continuously, 24 hours a day, 7 days a week, regardless of weather. 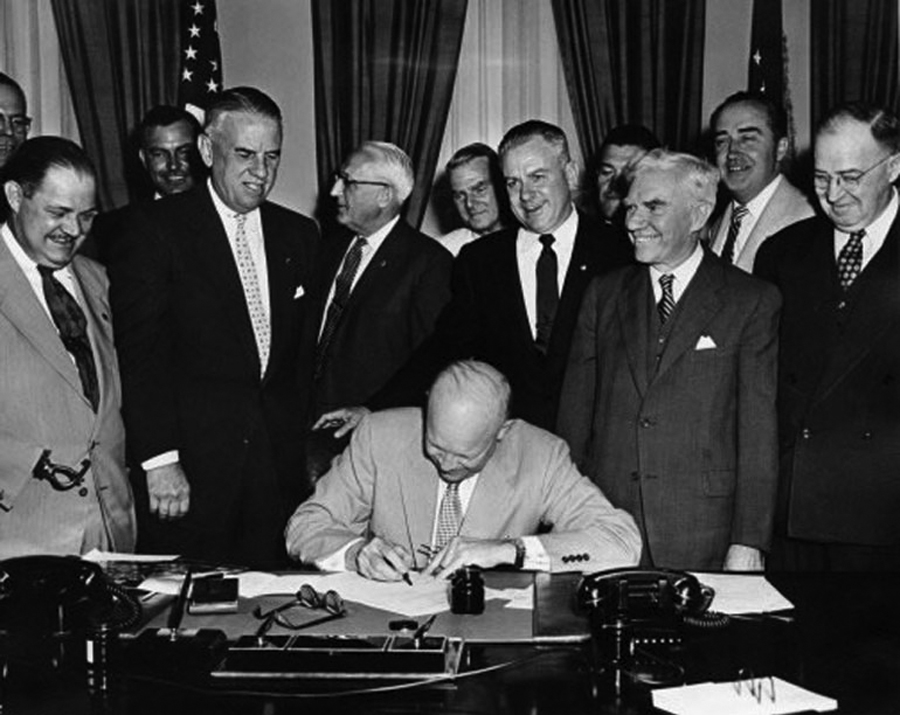 Since April 6, 1948 (known then as “Army Day”), the Tomb has been guarded by soldiers from the U.S. Army’s 3rd Infantry Regiment, “The Old Guard.” The Old Guard is posted to Fort Myer, Va., adjacent to Arlington National Cemetery. It is considered one of the highest honors to serve as a Sentinel at the Tomb of the Unknown Soldier. 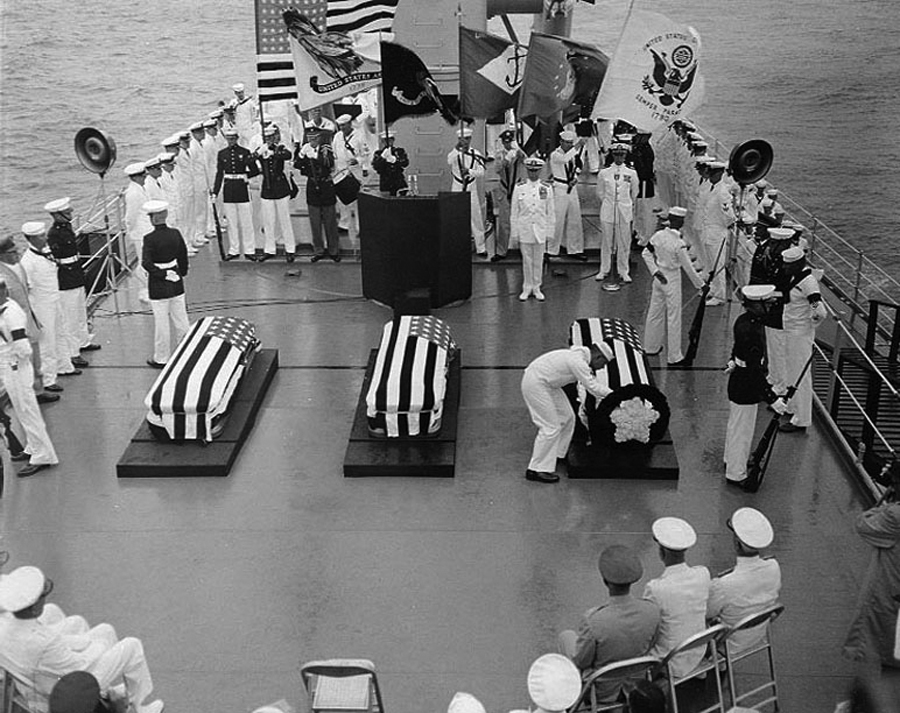 1956: Honoring the Unknowns of World War II and the Korean War

On Aug. 3, 1956, President Dwight D. Eisenhower signed a bill to select and honor unknown service members from World War II and the Korean War. They would be buried in crypts adjacent to the original Tomb.

1958: Unknowns of World War II and the Korean War interred

To represent World War II, the Army chose 18 unidentified bodies from North Africa, Europe, the Philippines and Hawaii. From these 18, two were chosen for final selection ó one from the Pacific Theater and one from the Transatlantic Theater. On May 26, 1958, Hospital Corpsman 1st Class William R. Charette, an enlisted Navy sailor and Medal of Honor recipient, made the final selection aboard the USS Canberra. Meanwhile, four unidentified bodies from the Korean War were disinterred from the National Memorial Cemetery of the Pacific in Hawaii. Army Sgt. Ned Lyle chose one to become the Korean War Unknown.

The caskets of the World War II and Korean War Unknowns arrived in Washington on May 28, 1958, where they lay in state in the Capitol Rotunda until the morning of May 30. Reprising the events of 1921, a large ceremonial procession then escorted their caissons to Arlington National Cemetery. President Eisenhower awarded each the Medal of Honor, and the Unknowns of World War II and the Korean War were interred in the plaza beside their World War I comrade. 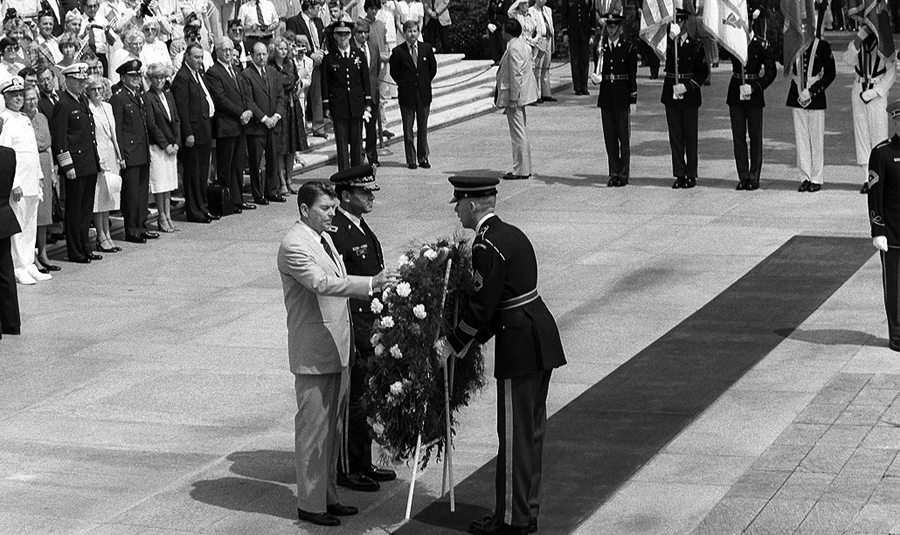 During the Vietnam War era, advances in science and technology made identification of the dead increasingly accurate. By May 1984, only one set of recovered American remains had not been fully identified. These remains were designated as the Unknown Soldier from the Vietnam War. On Memorial Day 1984, an Army caisson carried the Vietnam War Unknown from the U.S. Capitol to Memorial Amphitheater at Arlington National Cemetery, where President Ronald Reagan presided over the interment ceremony and bestowed the Medal of Honor. 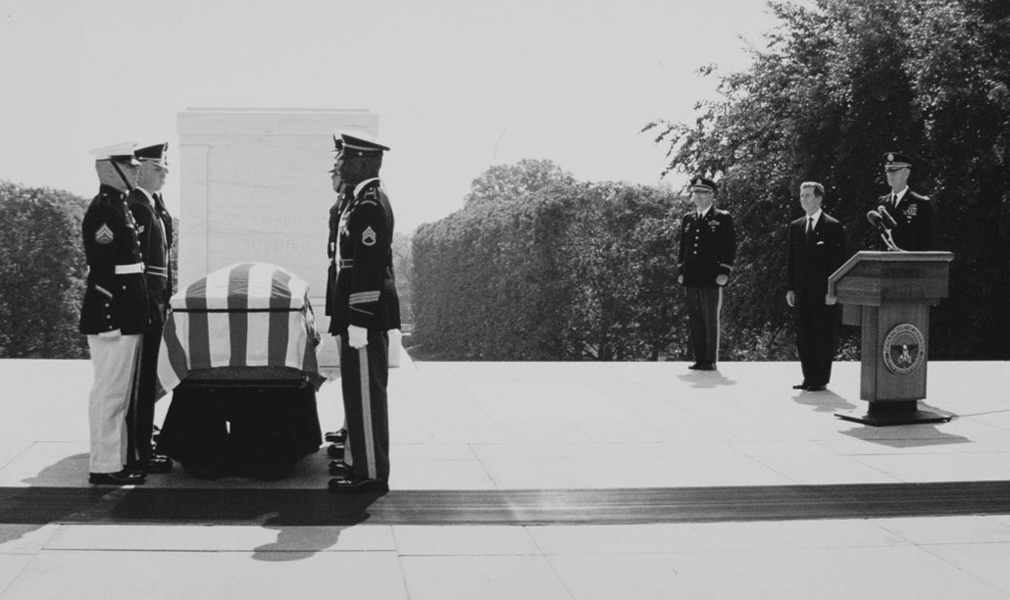 1998: Identification of the Vietnam War Unknown

For almost 14 years, the Vietnam War Unknown lay at rest at the Tomb. In 1994, Ted Sampley, a POW/MIA activist, determined that the remains were likely those of Air Force 1st Lt. Michael Joseph Blassie. In 1998, DNA testing confirmed Blassie’s identity. At the request of Blassie’s family, the Department of Defense exhumed the remains from the Vietnam War Unknown’s crypt on May 14, 1998.

In accordance with the wishes of his family, Blassie was reinterred at Jefferson Barracks National Cemetery in St. Louis, Mo. 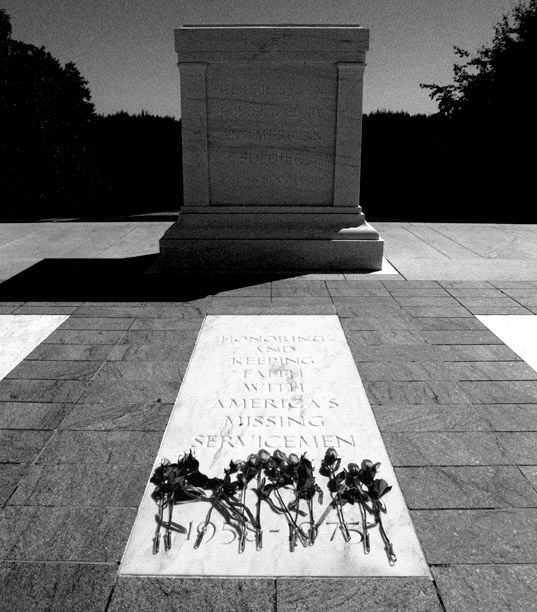 1999: Redesignation of the Vietnam War Crypt

The crypt designated for the Vietnam War Unknown remains vacant. On Sept. 17, 1999, National POW/MIA Recognition Day, it was rededicated to honor all missing U.S. service members from the Vietnam War. The slab over the crypt that once held the remains of the Vietnam War Unknown has since been replaced. The original inscription of “Vietnam” has been changed to “Honoring and Keeping Faith with America’s Missing Servicemen”, a reminder of the commitment of the Armed Forces to the fullest possible accounting for missing service members.

Today, the Defense POW/MIA Accounting Agency continues the work to recover and identify missing U.S. military personnel from all past wars and conflicts in countries around the world. According to DPAA’s records, more than 1,500 Americans remain unaccounted for from the Vietnam War. It is unlikely that another unknown will ever be added to the Tomb.