PALMDALE, Calif. — Odd as it might seem, the regional heart of California aerospace research and manufacturing has zero scheduled airline service to anywhere and hasn’t had it for years.

But the city of Palmdale is coordinating with the Air Force Materiel Command, headquartered at Wright-Patterson Air Force Base, Ohio; Edwards Air Force Base, and contractor companies on and around Palmdale’s Air Force Plant 42 to bring commercial air service back to the High Desert region.

According to a new, unpublicized brochure PDF file attached to the City of Palmdale website, the marketing campaign and still undisclosed plans for “innovative financing and project delivery tools” for scheduled airline service is based on findings from a new city-funded feasibility study. A city official said the study’s findings demonstrate significant demand for regional commercial air service to one or more major airports, with scheduled flights to hub airports in major cities east of California and easy connections to destinations for both domestic and international business travel.

Establishing that kind of regular, reliable service remains a top priority for both the military and contractors after years of costly trial and error. As an example, being able to avoid 206-mile roundtrip drives from Edwards AFB to LAX would save the government $2,389,600 in driving costs alone, save time for personnel and remove the additional driving hazards facing key people with specialized expertise. 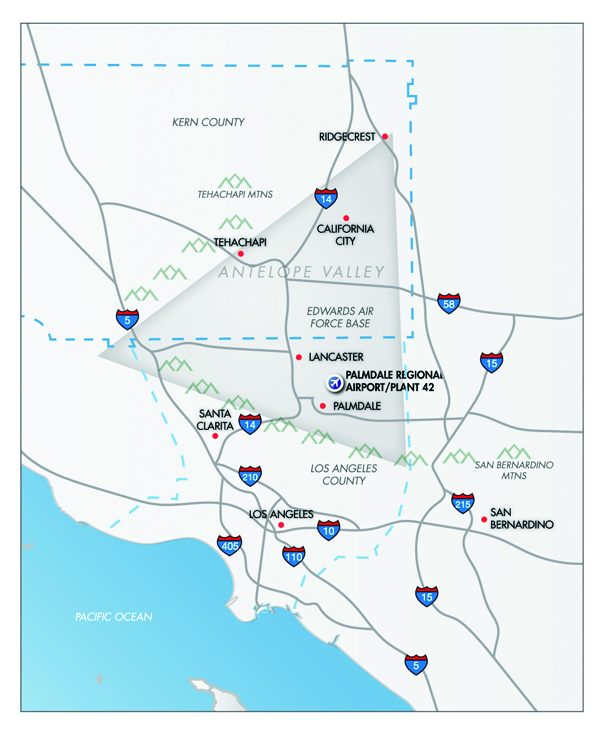 First, city Communications Manager John Mlynar confirms that the website attachment statement about “the future airport” tentatively planned for a 600-acre city-owned site adjacent to Plant 42, southeasterly of Avenue M and Sierra Highway, means the existing terminal building won’t be used. Access to Plant 42 runways was not addressed in the posting.

With the city-owned location near the railroad tracks and the entrance onto Avenue M, the new civil airport terminal is planned to be built on some portion of the property where Palmdale previously planned a now cancelled power plant.

Scheduled airline service in the High Desert region of North Los Angeles and Southeastern Kern counties has been a story of feast and famine for decades.

Gen. William J. Fox County Airfield in Lancaster had scheduled daily airline service as far back as the 1950s, but nothing since the 1980s. Fox Field remains as the only one of five Los Angeles County-owned airports to be certified by the Federal Aviation Administration for providing scheduled airline service.

In the 1960s, Palmdale was proclaimed by the Los Angeles Department of Airports as the future home of what was to be Palmdale International Airport, a plan that sold real estate, but not a single airline ticket on the 17,000-acre desert site.

Years later, Los Angeles World Airways and the City of Palmdale, in cooperation with the Air Force, opened a Palmdale Regional Airport terminal, which saw a succession of feeder airline tenants, usually with subsidies and operating with various degrees of success, depending on shifts in the economy and having enough flights to the right destinations for passengers. Commercial carriers recruited to Palmdale Regional included America West, American Eagle, Horizon, Skywest, and United Express, the last to depart.

The passenger service market area for the new Palmdale airport is the familiar High Desert triangle, encompassing Ridgecrest/China Lake on the north, I-5 at Gorman on the west, and the San Bernardino County Line on the east.