From the American Battle Monuments Commission

On the Western Front of World War I, death did not discriminate.

Artillery screaming towards the trenches treated men of all races the same. But the soldiers of the 92nd and 93rd divisions lived segregated lives, both in and out of war.

These all-Black units, which served under mostly white officers, readily took up arms with their fellow Americans, hopeful that their patriotism and service would lead to better treatment at home.

In the end, the Harlem Hellfighters, as they were likely first dubbed by their German adversaries, spent more time in continuous combat than any other American unit of its size, with 191 days in the front-line trenches, according to the National Museum of African American History and Culture.

The unit also suffered 1,400 total casualties, more than any other American regiment. Many of those soldiers are buried or memorialized at American military cemeteries overseas managed by the American Battle Monuments Commission (ABMC).

More than 350,000 African Americans served in the Great War. The majority were assigned to labor and stevedore battalions—digging ditches, building roads and supplying the front lines.

Throughout the course of WWI, only about one in 10 African Americans in the U.S. military served in a combat role based on leadership decisions at the time.

In March of 1918, the regiment began training under French command due to their need for replacements.
Despite the expectation that this arrangement would be temporary, members of the 369th never served under American command during the war.

By summer, they were fighting in the Champagne-Marne Defensive and the Aisne-Marne Offensive.
It would be then that the Harlem Hellfighters would see grisly combat during the Meuse-Argonne Offensive, which began on Sept. 26, 1918.

As the 369th advanced, capturing towns and a key railroad junction, the losses mounted. In a matter of days, these advances cost the regiment 851 men, and shortly after they were relieved from the front lines. 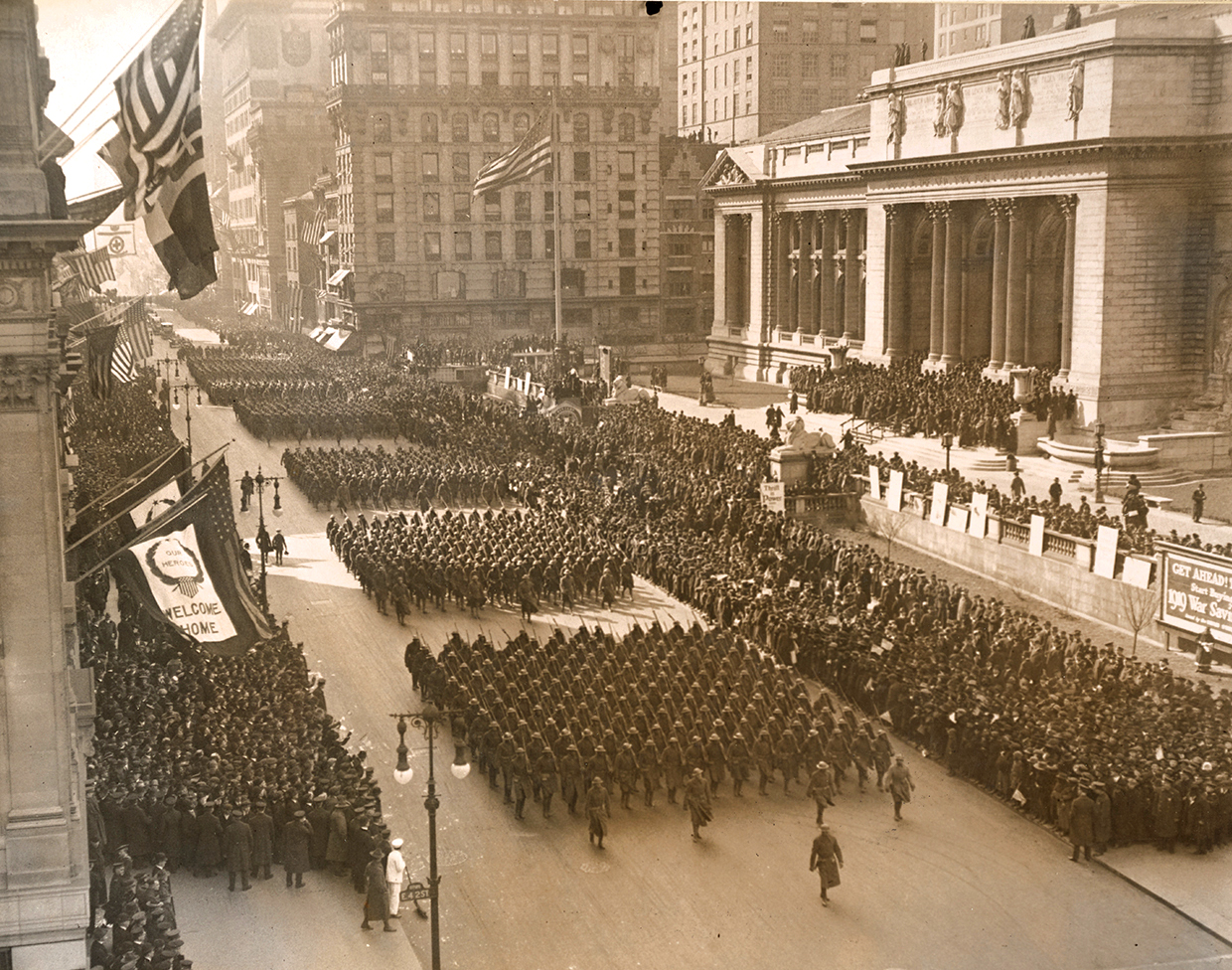 In recognition of their bravery during the offensive, 171 officers and men received medals and the entire regiment received the Croix de Guerre from France.

The 369th returned to a huge victory parade in New York in February of 1919.

Thousands gathered along 5th Avenue and 42nd Street, outside the New York Public Library, welcoming home the brave soldiers. The division was even featured prominently on the cover of the Sunday New York Times.
But despite this celebration, little to nothing changed in their day-to-day lives. It would take another world war, and decades of civil rights activism before the hopes of these African American doughboys would start to be realized.

In fact, the inequalities experienced by these brave men are still being remedied today. Legislation passed by Congress in 2014 paved the way for Pvt. Henry Johnson, a Harlem Hellfighter with the 369th, to receive the Medal of Honor. And in 2020, the Army Center of Military History approved the official special designation of the Harlem Hellfighters.

There are 169 members of the 369th Infantry Regiment, 93rd Division, buried or memorialized at ABMC cemeteries. The majority are at Meuse-Argonne, but also at Aisne-Marne, Oise-Aisne, St. Mihiel and Suresnes American cemeteries.

Among the more than 14,000 total American soldiers buried at Meuse-Argonne is Freddie Stowers, a member of the 93rd Division, 371st Infantry Regiment, and the first African American to receive the Medal of Honor from WWI.

As at all ABMC sites, the cemeteries are integrated. Race, rank, gender or creed had no determination on burial location and every day the fallen are remembered for their selfless sacrifice.