Over the years I have attended my fair share of Veterans Day programs and have been a part of organizing many of them.

Many great men and women who have put on the uniforms of our country have always been the main draw at these events, and many of us look forward to seeing old acquaintances and hearing what’s going on in the world of our veterans. The programs circle around the all-important message of remembering the fallen, the sacrifices and those serving today.

As communities remember, there does come a time when those of us long in the tooth start to lose the passion. Programs begin to look a lot like each other, and as the numbers of those remembered in bell ceremonies represent the empty seats of those we called friends, they end up making us look at our own mortality.

Old veterans are embraced by many as they can, sometimes taking the place of all those no longer around to fill the shoes of family members and friends long gone. For many it’s kind of therapy to gather in their presence and hear the stories and reminisce. In some cases it can be as they say “chicken soup for the soul.” Over the years, I have found myself getting less and less involved because sometimes it’s a bit emotionally overwhelming. And for those who know me, more times than not it can shake me to the core.

That being said, there is one area I find myself going to that will be the mission of my soul until the day I’m no longer around. We older veterans understand more than most the cost of service and the families who have lost loved ones. We older veterans are blessed in many ways because we have lived long and productive lives after service, living the lives and dreams of youth that America has provided for us.

Many of us realize that with each passing year those we lost in the many wars and conflicts of our nation are our focus. With the passage of the time which has been a part of our living years, we find ourselves saddened for the unrealized lives lost as we press on with their memories in our hearts. Many times, we can sit at celebrations and remembrances and our minds will be far off in another place as we say: “Why them, and not me?”

For many veterans who do not show up or tell their stories over the years, I truly believe it can be from a nagging sense of guilt they suffer when it comes to those who never came home or are no longer with us. As I get older, I feel the need to think more about those lost, and the countless families and friends who never lived to an old age than those of us still riding the clock of everyday life and continue to press on. 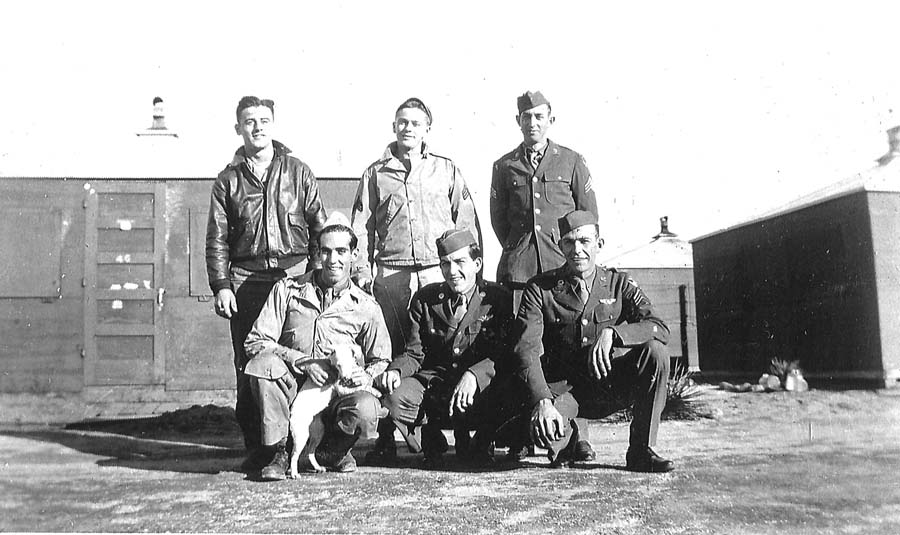 A case in point is a story I have told many times about a World War II tragedy that took place here in our Valley at Muroc Army Air Field. I have told the story many times over the years, but one aspect was the death of those 10 men. However, it was the death of just one of those men that changed how I viewed the fallen and how it made me rethink the special relationship between the generations of veterans.

Back in 1944, when that B-24 went down near us in the Antelope Valley we realized those 10 men had families across the United States, and when the old man of the crew that just had just barely turned 26, you realize they all had a lot of living to do in the coming years. But that was not to be as in a flash on a mountain top, 10 generations of this aircrew’s families had their lives changed forever as this branch of 10 family trees was not going to grow any larger. With time passing and the hurt fading, the 10 men just became a part of an American story that was playing out all around the world with other names and faces. But for one young soldier and me, it would become our personal connection.

While waiting to attend a meeting at the veteran’s cemetery down in Westwood, I found myself in the cremation niches in an old part of the cemetery. Looking at the dates I was viewing one of the areas of veterans who were killed in 1944 here in the States. As I turned to move from one wall to another I paused as something had “pinged” my senses, and I turned back as my eyes focused on one small plate in the wall of many.

At first it was just a name and a date, but then it hit me that I was being hailed from across time as it was an airman I never met but had gotten to know very well — one Sgt. Joseph A. Botelho Jr.

Many times, I had walked among the remains of the airplane in which he lost his life. As I stood there I reached out and touched his final resting place and wondered how many or if anyone had visited him from the time of his death. But here I was speaking his name and remembering the story of his sacrifice, and I was humbled as our spirits connected.

Discovering that he had come from a very large family and one of his brothers was a career Marine, I felt reassured that yes, he was visited at times over the years and that I was just a stranger who now follows in his family’s footsteps caring about Joseph as a veteran and a fellow Air Force sergeant.

Sgt. Joseph A. Botelho Jr., a B-24 gunner from Bedford, Mass., never made it home to family, but he is among many who also never made it home. We veterans and patriots who are blessed to carry on, now sit at Memorial Day and Veterans Day programs not so much to look and listen to the programs and the speakers, but more directed to the view of the many headstones flying flags.

We wish that they were still with us and realize we may have been the lucky ones to press on, but it’s those resting in peace and their whispers from the silence that we strain to hear.

God bless every veteran who we remember this week, and may God grant them the happiness they so truly missed out on in their short life in sacrifice of others, including we veterans who mourn their loss. Veterans Day is as much about the silence as the speeches, poems, songs, and of course — the many lives touched that will never heal from the loss of loved ones.

Peace my friends as we remember … Bob.

B-24 from Muroc crashes on training flight

On Jan. 3, 1944, a B-24J Liberator with the 536th Bomber Squadron, 382nd Bomber Group, took off from Muroc Army Air Field for a nighttime navigational training flight to Kingman, Ariz., and back to the Muroc Bombing Range.

The crew were unable to establish radio contact with the bombing range controller, and the pilot was ordered by Air Traffic Control to climb to 9,000 feet and maintain a holding pattern. At 3:50 a.m., the pilot radioed and requested landing instructions. ATC declined his request, as they had another priority B-24 that was low on fuel that needed to land first, and told the pilot to continue maintaining his pattern.

At about 4 a.m., the bomber lost elevation and collided with a small mountain, 25 miles southeast of Muroc, instantly killing the 10-man crew, crashing at about the 4,500 foot level.
Investigation did not determine why the airplane lost elevation.