PALMDALE, Calif.— America’s research and production center for cutting edge aerospace vehicles got the technological equivalent of a brain transplant the morning of Nov. 30, 2022, with a ceremony marking completion of a state-of-art, 160-foot control tower.

Air Force Plant 42, birthplace of NASA space shuttle orbiters, air superiority fighters, spy planes that fly faster and higher than any foe, and bombers invisible to radar, had been nervously tending to the existing control tower installed in the mid-1950s and well beyond its life expectancy. 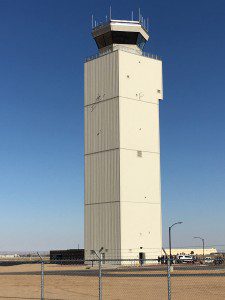 James Elsberry of the U.S. Army Corps of Engineers, which designed the 12-story control tower built of structural steel clad with metal panels, has buckling restraint brace framers to maintain the tower’s structural stability in sustained winds of up to 110 mph.

The contract for construction was awarded to Stronghold Construction Co. on Aug. 20, 2020, with construction starting on Nov. 20 of that year. Elsberry said some technical equipment installations remain to be finished by Dec. 22, with the tower to be operational in January or early February.

A special guest taking part in the mid-morning dedication and ribbon-cutting for the $17.9 million control tower was longest-serving Plant 42 administrative secretary Lorraine Saddler whose 40-year career began with the first Plant 42 commander and continued through 18 more until her retirement.

Speakers, included Justin Gay, Los Angeles District Army Corps of Engineers commander, and Brig. Gen. Matthew Higer, 412th Test Wing commander at Edwards, who said Plant 42 and Edwards, NASA Armstrong and other civil and military aerospace installations within a 120-mile radius are “at the center of the flight test universe.”