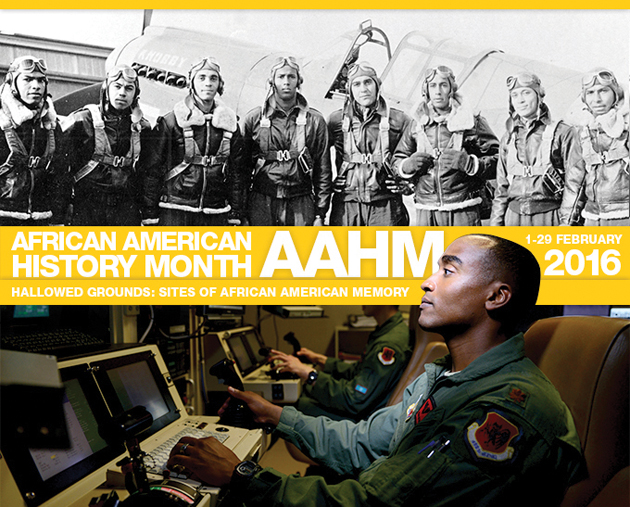 DAVIS-MONTHAN AIR FORCE BASE, Ariz. — Dr. Carter G. Woodson, founder of the Association for the Study of African American Life and History, once said, “Those who have no record of what their forebears have accomplished lose the inspiration which comes from the teaching of biography and history.”  The ASALH selected the theme, Hallowed Grounds: Sites of African American Memories, for the African-American History Month 2016 observance.

The following will trace a brief history of some of the significant individuals and accomplishments that have played a role for the members of the African-American community.  The story of America could not be told without preserving and reflecting on the places where African-Americans have left their mark throughout history.

The history of African-Americans unfolds across the canvas of America, beginning before the arrival of the Mayflower and continuing to the present.  According to the U.S. National Parks Service there are close to 200 African-American historical landmarks spread across 40 states.

Why is this information important?  This prompts us to remember the people and places where Africans disembarked from slave ships, to the battlefields where their descendants fought for freedom, to the colleges and universities where they pursued education, to places where they created communities during centuries of migration. The imprint of Americans of African descent is deeply embedded in the narrative of the American past.

In 1841, the U.S. Supreme Court freed 35 Africans who were abducted from their home in Sierra Leone by Portuguese slave traders, abroad the schooner Amistad.  Passage was cleared for them to return back to their home on the West African Coast.  This event helped inspire the beginning of the abolitionist movement.

Harriet Tubman was an abolitionist, humanitarian, and leader of the Underground Railroad.  The Railroad was a loosely organized network of connections for slaves escaping to the north.  Homes, or “stations” would provide food and shelter for escaping slaves, and the leader of the group, or “conductor”, ensured that they moved safely from station to station.  It is estimated that close to 100,000 fugitive slaves used The Railroad between 1810 -1860.

African-Americans have served honorably from the Civil War to the establishment of black only regiments in the U.S. Army, Buffalo Soldiers, to Tuskegee Airmen to full integration today.

In 1866 six black regular army regiments were formed.  Officered by whites, these regiments went on to justify the belief black leaders could contribute mightily to the nation’s defense.

In 1930, Thurgood Marshall was denied admission to the University of Maryland Law School because he was black.  After getting accepted to Howard University Law School, he began to develop an impressive track record of winning court cases against states that aimed to continue practicing discrimination.  He later became the first black American to sit on the Supreme Court, from 1967 to 1991.  His distinctive tenure of service lasted twenty-four years.

In 1954, the Supreme Court ruled unanimously in Brown v. Board of Education that racial segregation in public schools was unconstitutional.  Many southern political leaders claimed the desegregation decision violated states’ rights.  They responded with defiance, legal challenges, delays and token compliance.  By the end of the 1950s, less than ten percent of black children in the south were attending integrated schools.  Little Rock High School, Arkansas, was the scene of the most tumultuous tests of the Supreme Court’s Brown v. Board of Education ruling.  Three years after the trial, a federal court ordered Little Rock to comply and desegregate the school.

Ralph David Abernathy, Sr. was a leader of the African-American Civil Rights Movement, a minister, and Martin Luther King, Jr.’s closest friend.  In 1955, he collaborated with King to create the Montgomery Improvement Association, which would lead to the Montgomery Bus Boycott.  In 1957, he co-founded, and was an executive board member of the Southern Christian Leadership Conference.  He led the Poor People’s Campaign March on the National Mall in Washington, D.C. in 1968.

In May 1961, the Congress of Racial Equality, led by James Farmer, organized integrated Freedom Rides to defy segregation in interstate transportation.  The Freedom Riders arrived in Montgomery, Alabama, on an integrated Greyhound bus from Birmingham, Alabama.  They were met with violence as a large mob attacked them.  Despite the violence, additional Freedom Rides continued throughout the south.

In 1994 the National Park Service acquired the Council House, Mary Mcleod Bethune’s, president of the National Association of Colored Women, last official residence and the original headquarters of National Council of Negro Women.  The Mary McLeod Bethune Council House National Historic Site preserves the house of Bethune, located in Washington, D.C., Bethune was the president of the NCNW from 1935 -1949. She brought together black women from many different organizations. Bethune was also an American educator, life rights leader, and founder of the NCNW.

During African-American History Month, we celebrate these formative leaders and sites of the civil rights movement, as well as innumerable others who have contributed immeasurably to the tapestry of America, helping shape our nation and the world.  African-American History Month is a time to reflect on our nation’s history and progress, and recommit to advancing equal opportunity for all.

For more information please contact the Equal Opportunity office at 520-228-5509.  The 355th Fighter Wing will also host a Cultural Awareness Festival, May 20, to honor, observe and celebrate those who have made significant contributions throughout history to our nation.