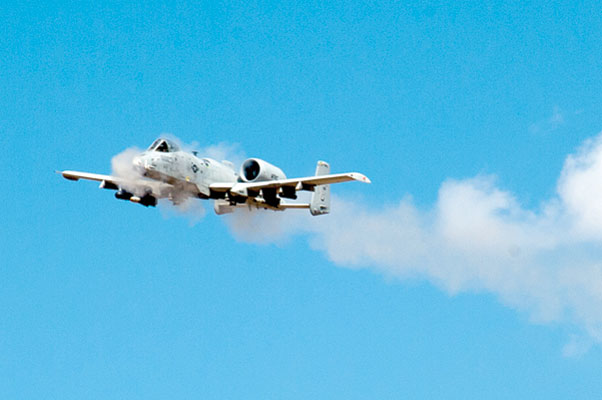 An A-10 Thunderbolt II from Davis Monthan Air Force Base fires its 30mm gun Aug. 31 during a training mission at the Barry M. Goldwater Range located in Arizona near the Mexico-U.S. border. Honorary commanders are civic leaders who are partnered with squadron commanders to share experiences in each other’s workplace and build relationships in the community. Honorary commanders learn more about the Air Force, Luke AFB, its mission and its people. The group saw night flying operations, bombing runs, and strafing maneuvers performed by A-10s and F-16 Fighting Falcons from Luke. The BMGR is the nation’s third largest tactical aviation range and is essential for developing and maintaining the combat readiness of the U.S. Air Force, Marine Corps, Navy, Army and allied forces. Since the beginning of World War II, the range has contributed to the nation’s defense and air power superiority by accommodating rapidly changing training requirements for combat capability.