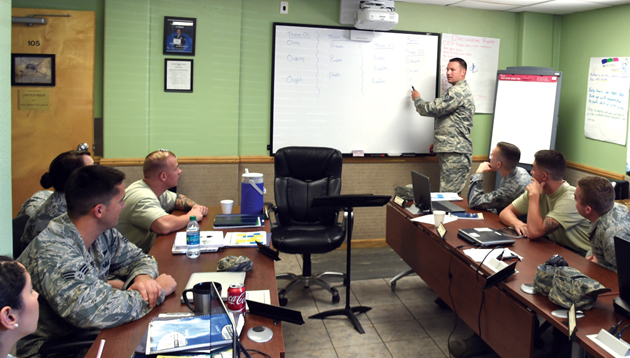 LUKE AIR FORCE BASE, Ariz. — Developmental special duties shape the Air Force by building leaders and placing them in key positions to lead Airmen. The DSD program provides Airmen an important opportunity to lead and has been life-changing for those who have experienced it.

“The DSD program is a phenomenal initiative to ensure we are putting the right people in front of the right Airmen at the right time to effectively shape the future of our Air Force,” said Chief Master Sgt. Randy Kwiatkowski, 56th Fighter Wing command chief.

In October 2013, the Air Force began transforming the special duties process. Instead of relying on volunteers to fill special duty positions, candidates now go through a deliberate selection process before getting the nod to fill these critical positions.

“The capacity to have so many layers of influence, from the front line supervisor all the way up through the entire chain of command before we push candidates up to the MAJCOM and Headquarters Air Force, is a pretty significant exclamation point behind the importance of the program,” Kwiatkowski said.

The Air Force DSD nomination cycle is held March and September. In the 56th FW, supervisors submit a worksheet and are required to initial boxes to ensure candidates are qualified for the programs they are vectored for.

Many of the DSD qualifications include having no administrative actions, which resulted in an Article 15, or no unfavorable information file for the past three years, Community College of the Air Force degree or higher or minimum 52 credits toward the degree, and completion of Airman Leadership School.

For those who have met the necessary qualifications and have experienced the impact they have on the lives and careers of our Airmen, the DSD journey has fueled new passions in life.

“I grew up in the Air Force as an aviation resource manager and followed the advice of my career field functional manager to apply for special duty, learn what I can from that experience, and bring that knowledge back to the career field,” Kwiatkowski said. “I was later selected as an academy military training NCO, and the lens I once looked through completely changed — my entire perspective of the Air Force evolved. “I realized I had a passion for motivating, developing and inspiring people.”

The DSD program broadens Airmen’s experiences of the Air Force while sharpening leadership skills to weave back into the fabric of their primary career fields.

“I made critical path choices during my time at the Air Force Academy,” Kwiatkowski said. “I turned off my degree plan in professional aviation and started a new degree plan in psychology because I wanted to understand how the human mind worked and how to enhance my capacity to help people succeed.”

“We bring back what we learn from our DSD experience to improve our career fields and teach different ways of approaching the critical role of leading Airmen,” he said. “I wouldn’t be equipped with the tools I share today without the special duty experience.”

As a NCO and charged with the responsibility of leading Airmen, Staff Sgt. Joshua Hoffman, 56th Security Forces Squadron, was given the opportunity to benefit from this program. Hoffman was recently selected to become a military training instructor at the John J. Rhodes Airman Leadership School here. His experience has been positive, and he’s excited to bring his new set of skills back to his job.

“Not only am I teaching leadership and communication, but I am learning as well,” Hoffman said. “It’s a constant learning and improvement process for me both personally and professionally. Typically, technical and master sergeants are in charge of 30 to 75 Airmen in a flight, and everything I am learning here will increase my effectiveness as a leader. This is a dream job, and it is extremely rewarding when I get a letter saying I helped make an Airman’s life better.”