LUKE AIR FORCE BASE, Ariz. — The Luke Air Force Base Catholic Community sent 13 youth and three leaders to World Youth Day July 21 through Aug. 6, which was held in Krakow, Poland. The theme for this year’s WYD was Matthew 5:7, “Blessed are the merciful, for they shall receive mercy.”

World Youth Day, a six-day event, is an encounter with the pope by youth worldwide and included activities of multiple simultaneous concerts throughout the city including dancing, singing and classes.

“Young adults from around the world united for the same cause,” said Bina Boles, WYD Pilgrim leader. “It was an overwhelmingly beautiful sight.”

What is the cause?

It began in 1984 as the Holy Year of Redemption closed and Pope John Paul II invited youth from around the world to an International Jubilee of Youth on Palm Sunday in St. Peter’s Square. He was excited to see 300,000 young people respond.

“What a fantastic spectacle is presented on this stage by your gathering here today,” the pope said. “Who claimed that today’s youth has lost their sense of values? Is it really true that they cannot be counted on?”

It was this day that a spiritual movement was entrusted to the youth of the world and is now known as the World Youth Day of the Cross.

The first time WYD youth from Luke attended was in 2002 in Toronto. This event also marked the last time Pope John Paul II would be present.

“When, back in 1985, I wanted to start the World Youth Days … I imagined a powerful moment in which the young people of the world could meet Christ, who is eternally young, and could learn from him how to be bearers of the Gospel to other young people,” the pope said. “This evening, together with you, I praise God and give thanks to him for the gift bestowed on the church through the World Youth Days. Millions of young people have taken part, and as a result have become better and more committed Christian witnesses.”

The Luke Catholic Chapel youth worked with the support of Monsignor Ronald Metha, 56th Fighter Wing Chapel chaplain, and others to raise money to lower costs through sales of cookie dough, snacks, burritos, crafts and jewelry, plus collecting donations, and giftwrapping at the Exchange.

Of the positives that came from the event, the Luke youth had the opportunity to meet other young adults from various nations, learning a little bit about each of them, and exchanging simple U.S. patriotic gifts with mementos from other countries that included Japan, Italy, Philippines, Australia, Iraq, Israel, Dubai, Portugal, Ireland, Canada, Mexico, France, England and more.

“My faith was strengthened by being able to pray in the presence of so many holy relics and locations,” said Lenin Quiroz, Luke youth.

The CYOC members continued their cultural journey to explore Poland’s Wieliczka Salt Mine, which is a monument to the Polish nation. They also visited the Auschwitz Concentration Camp, which is part of Poland’s most tragic history and the Schindler Factory where Oskar Schindler saved many Jews during World War II. 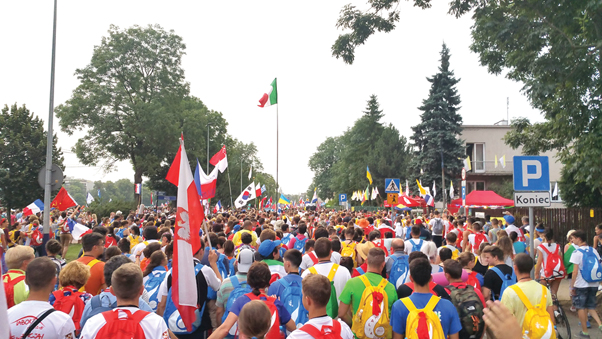 Three leaders and 13 youth from Luke Air Force Base Catholic Chapel traveled to Krakow to be part of the 3.5 million people who attended the three-day Catholic youth event. 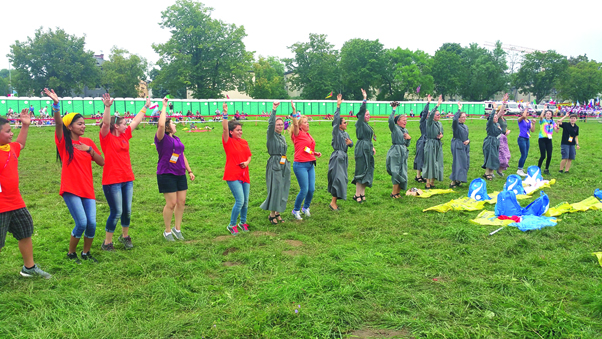 Young people from countries around the world, including Luke Air Force Base Catholic Chapel, attended World Youth Day in Poland and danced with Polish nuns while awaiting the pope’s arrival to Blonia Park in Krakow.