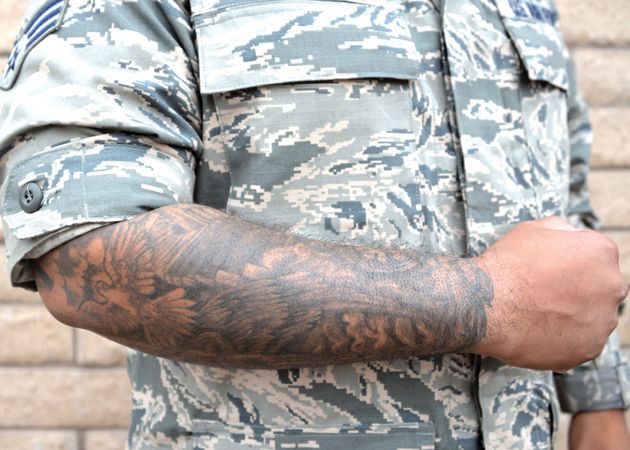 The Air Force announced a new policy on dress and appearance with regard to tattoos, Jan. 9, 2017.

According to the new policy, authorized tattoos on the chest, back, arms and legs will no longer be restricted to 25 percent of the exposed area while in uniform. Hand tattoos will be limited to one single-band ring tattoo, on one finger, on one hand. Current Airmen with existing hand tattoos authorized under the previous policy will be grandfathered in under the old policy standards.

With a recent review from the Air Force field recruiters, almost half of applicants had tattoos. Of these, one of every five were found to have tattoos requiring review or could be considered disqualifying. This new policy lifts the 25 percent restriction and allows civilians previously disqualified to be retained for service.

“I wasn’t surprised when I found out about the policy change,” said Master Sgt. Brandy Rucker, 56th Security Forces Squadron first sergeant. “The Air Force is evolving and this policy change helps bring in new members from around the world.”

Not only does the new policy help gain new Airmen but also for current Airmen, it gives them the opportunity to express themselves.

“Tattoos don’t define a person’s work ethic,” said Senior Airman Carlton Mickles, 56th Civil Engineer Squadron electrician. “We all come from different parts of the world and have experienced many different events in life. Sometimes tattoos are a way to express what a person has lived through in his life. With the new tattoo policy, this will bring in more people willing to serve.”