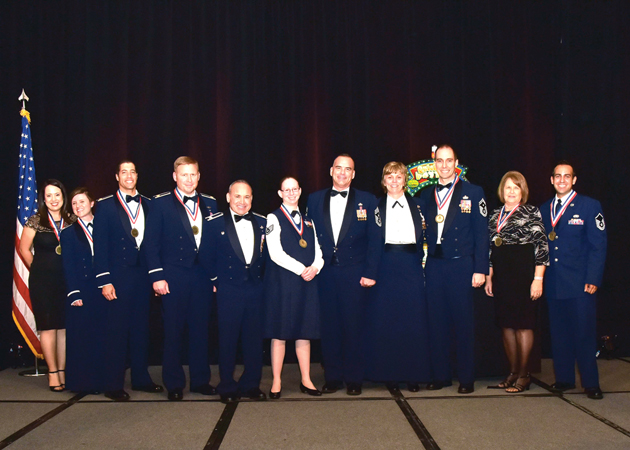 As a celebration of outstanding achievements by wing members the 2017 944th Fighter Wing Annual Award winners were honored during a “Casino Royale” themed black tie gala held at the Wigwam Resort on February 11.

During the event, which was steeped in heritage and evening attire, Dan Clark, founder and CEO of Dan Clark and Associates, provided the keynote speech for more than 500 attendees.

As the son of a former service member, and one of the most sought-after motivational speakers, Clark delivered an inspirational speech about service before self. He emphasized the importance of our service member’s sacrifices and the appreciation he has for them.

His presentation was filled with humorous stories and emotional experiences that happened in his life dealing with service members that had the attention of all.

“I was impressed with his knowledge of our culture and the homework he did in preparation for our event,” said Col. Kurt Gallegos, 944th Fighter Wing commander. “Hearing what he had to say while speaking to our Airmen was exactly what we needed. I hope the message hit home and our Airmen use it and take pride in what they do and continue to strive for excellence in all they do.”

Clark’s other titles and accomplishments include university professor, award-winning athlete who fought his way back from a paralyzing injury that cut short his football career, a New York Times best-selling author, a gold record songwriter/recording artist, and adventurer. He delivers keynote speeches and transformational programs on leadership, building winning teams, relationship selling, and creating a culture of excellence to entry level employees, emerging leaders, and seasoned executives.

Gallegos presented Clark a framed photo of the 944th Fighter Wing and a plaque as a token of appreciation, and thanked him for talking to the group.

Before the conclusion of the evening, “007” delivered a “Top Secret” envelope with the annual award winners’ names.

“Nine forty-fourth members have to balance their military service, personal lives and professional careers each and every day,” said Chief Master Sgt. Rhonda Hutson, 944th FW command chief. “Many have to make hard sacrifices in several areas to ensure the Air Force mission is accomplished. The individuals considered for the 2017 annual awards clearly demonstrated sustained and superior performance throughout the year. Tonight is all about them!”

Gallegos, in closing, thanked service members for their service to their country and congratulated the award winners.

“You are the best of the best,” he said.