There are days and events in history that are etched in people’s minds forever. One of those days is Dec. 7, 1941, the day the Japanese attacked Pearl Harbor, and a day that President Franklin Roosevelt proclaimed in a speech before a joint session of Congress would live in infamy.

Although most people in the United States weren’t yet born, Dec. 7, 1941, is still a day that evokes an emotional response.

What’s more, most Pearl Harbor survivors are deceased, but a small number of them are still with us.

One of those special people was honored March 4 at the Arizona Commemorative Air Force Museum, Mesa.

Meet 99-year-old Eugene Leonard. His story is the stuff of legend. He turned 99 March 5, and the museum hosted Leonard for a birthday jubilee, which was highlighted by a flight on the Sentimental Journey, a B-17 Flying Fortress, one of the most prolific and storied flying machines of World War II.

The event was attended by his son, Donald, numerous friends and media outlets.

Leonard’s story began in Lyons, Kansas, a small town is the center of the state. His life was shaped by the depression years. He helped raise his five sisters, which was no small task. He said these years of hard work on the farm would condition him physically and mentally for his years in the war.

Another feat he accomplished was barnstorming across the country in various aircraft before the war.

He enlisted in the Marines in 1939, and his days in military began with a 90-day stint at Marine basic training, which has a reputation of testing the toughest people.

“It was a snap for me because I was tough,” he said.

One of his tasks on the farm was picking potatoes, which meant carrying 70-pound sacks. This work helped get him in shape and toughened him up, he said.

He was stationed at Ewa Marine Corp Air Station, Hawaii — a short distance from Pearl Harbor — on the day of the attack. Leonard’s life would soon change profoundly, as he was to experience events that most people only see in the movies.

Hollywood has made numerous motion pictures about Pearl Harbor and the events leading up to this day, which include “From Here to Eternity,” “In Harm’s Way” and “Tora, Tora, Tora.”

However, for Leonard, these films became reality.

His recollection of this day more than three quarters of a century ago was as if it had happened recently.

“I had guard duty Dec. 7,” he said. “I watched the raising of the flag and suddenly noticed airplanes flying over, which were smaller than our aircraft. My duty was to guard the ammunition shed, so I got into my vehicle to get back to the ammo shed. As Japanese machine gun fire hit my vehicle, I found a concrete hole to honker down in.

“It was full of scorpions, but scorpions are safer than bullets,” he said. “Shortly afterward, I ran to the guard house to get a rifle, but there was no ammo. I had a pistol and shot the lock off the shed and got ammo for my comrades and myself. I was told that we downed four enemy airplanes.”

The succeeding months and years would find Leonard flying numerous types of aircraft and helping to train hundreds of pilots. He said his principle love was being an airplane mechanic, and credits this love to the hours he spent in public libraries reading numerous books on aviation.

It is difficult for a fighting unit to function without adequate supplies. A vital task Leonard accomplished was getting a plethora of supplies to the fighting units, which included fuel, toilet paper and cigarettes.

“Everyone smoked in those days, so I would toss cartons of cigarettes to the men,” he said.

Not only that, he served at Guadalcanal and recalled being shot at numerous times, but fortunately the Japanese missed.

When the war ended, Leonard left the Marines as a staff sergeant taking a brief hiatus before joining the newly formed Air Force for an additional seven years.

Despite his years of experience in flying and working on aircraft, Leonard said he preferred auto mechanics and enjoyed a successful career in the field. He owned a garage and eventually had a mobile mechanic service. He also worked for various dealerships in the San Diego area.

He said one of his best achievements was inventing a carburetor in 1975.

Leonard has had his share of sadness suffering two strokes recently and losing his wife of 54 years and his second wife of 19 years earlier this year. He was the sole caregiver for both wives.

His son Donald followed his dad’s legacy serving in the Navy for five years, followed by a career in aviation.

Despite the strokes, his son said his dad is in good shape and still has good mobility.

Leonard said he thoroughly enjoyed his flight on the Sentimental Journey. It was a perfect birthday gift for a World War II veteran and aviator.

In all, Leonard’s birthday jubilee afforded him the chance to look back on a life of achievement and courage, and afforded the people who came to the event the opportunity to honor someone who lived history.

Gonna set my heart at ease 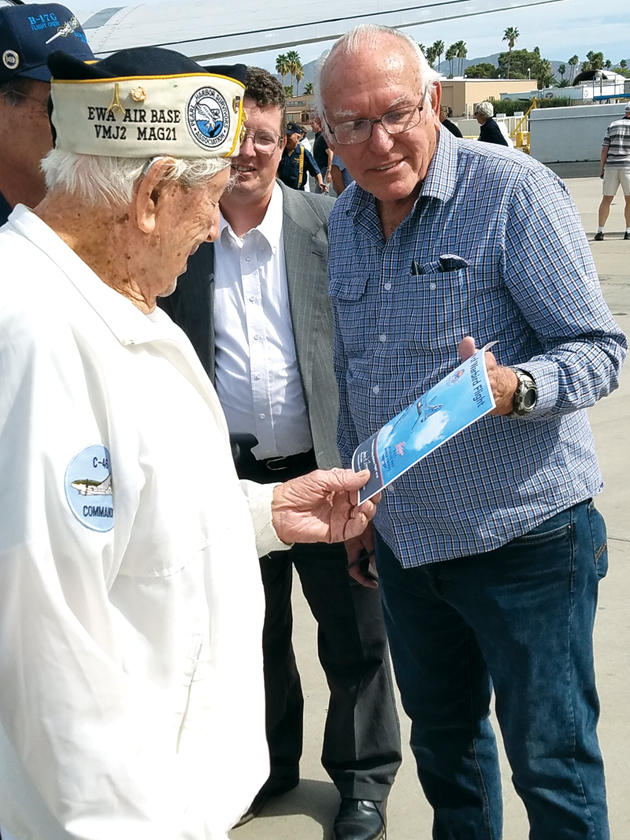 Eugene Leonard, 99, Pearl Harbor veteran, and David, his son, look at the commemorative certificate presented to Leonard and others who took a ride on the B-17 Flying Fortress named the Sentimental Journey.

Knocking Leukemia out of the park