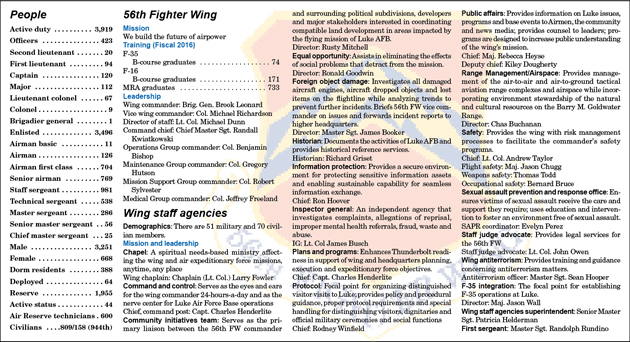 Responsibilities: CPTS is responsible for planning and executing an annual operations and maintenance budget of $116 million and maintains operational control of more than $500 million in accounting operations; performs cost analysis and economic studies as needed; provides financial customer support for more than 6,000 military, civilians and Reserve personnel.

Fun facts: Comptrollers (a.k.a Paymasters) have been “making it rain” since they were established by the Continental Congress in 1775 and have been an integral part of the U.S. Armed Forces ever since.

Demographics: There are 16 officers, nine government civilians and more than 200 contract employees.

Fun fact: Our contract employees have survived more than 4,500 hours of aerial combat and have been awarded 12 Distinguished Flying Crosses, 98 Air Medals and one Purple Heart.

Demographics: There are 13 instructor pilots, 12 civilians and 75 contracted maintenance professionals.

Vision: Develop professional fighter pilots and leaders for the U.S. Air Force and our partners.

Responsibilities: The 62nd FS is the only multi-partner F-35 squadron in the world and is responsible for conducting F-35 partner training for the United States and seven partner nations at Luke; the 62nd will eventually consist of 14 U.S., seven Norwegian and five Italian F-35s.

Fun facts: The squadron motto: “Spike Aces … 357 and Counting!” Since January 1941, the 62nd FS has destroyed 357 enemy aircraft either in the air or on the ground.

Demographics: There are 16 officers, 180 enlisted, 28 civilians and two contractors.

Fun facts: The squadron war cry, “Get in the fight!” serves as a call to arms and a challenge to others to match the squadron’s excellence.