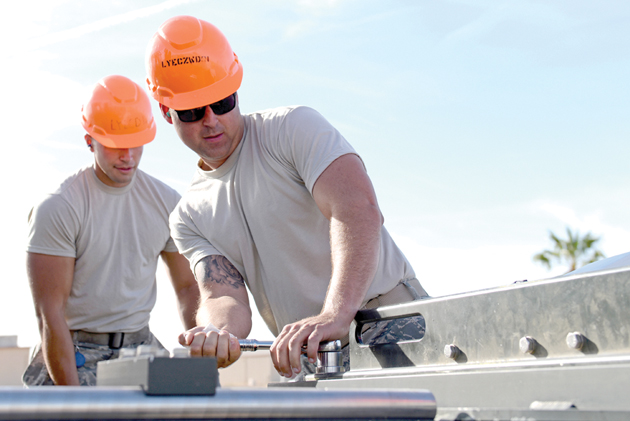 The competition challenged seven teams of ammo maintainers from bases around the world to compete in various tasks that simulated the range of activities required in live combat munitions operations.

“There are multiple sections in the ammo career field,” said Master Sgt. Johnathan Keehart, 56th EMS munitions control NCO in charge and competition team leader. “The competition focuses on several of those aspects, particularly storage, inspection and conventional weapons. We set up a munitions assembly conveyor, build and assemble bombs, and inspect an inventory for discrepancies.”

Each team is allowed a maximum of 10 members with a limit on the number of individuals who meet certain skill levels. The members of Luke’s team were nominated by their respective sections in the munitions flight based on their strong work ethic and high level of competency.

“There are a lot of people from different shops on our team who know bombs and bring with them special knowledge that will help us throughout the competition,” said Senior Airman Corey Keleher, 56th EMS conventional weapons crew chief and competition team member. “For example, one of our guys is an inspector, which will help us in the inspection challenge.”

Luke’s team trained daily since their formation in February.

“The training has been really beneficial,” Keleher said. “We don’t always get to build the specific bombs being used for the competition, so when we’re practicing our speed and efficiency, we also get to take a step back and really learn new things.”

In addition to preparing them for the competition, their practice reinforced important operational skills, which will allow them to uniquely excel as functional technical experts.

“A lot of times in our career field, when you get to a work center, you’re stuck in your area for quite a while,” Keehart said. “You get really good at one job, but your knowledge is limited. This competition helps to bring different ammo maintainers together. We have one member of the team who has been in the job for eight months, but because of how extensively we’ve been training, she knows how to build these bombs and set up the munitions assembly conveyor better than some people who have been in six, seven, or eight years.”

The team was optimistic about their chances, and fully intended to impress their ammo peers.