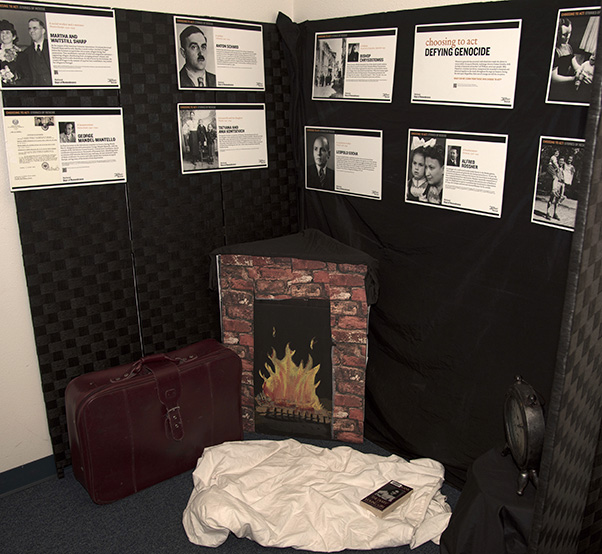 The National Holocaust Day of Remembrance is observed May 2, 2019.

The 2019 Days of Remembrance Committee hosted events at Luke Air Force Base, Ariz., April 29 to May 4 in memory of the Holocaust and its survivors.

Events throughout the week consisted of an essay contest to commemorate the victims and survivors of the Holocaust, an exhibit with movie clips at the base theatre and a hiding place display at the library, similar to where survivors often hid from the Nazis.

In addition to the other events, Holocaust survivors Ike Feigas and Joel Lassman spoke to Airmen during a lunch event about their time in concentration camps.

“There was no joy or laughter,” said Feigas. “The only thing everyone was concerned about is how to survive and get any kind of food they could.”

As Airmen listened, Lassman, a child of a Holocaust survivor born in a displaced person camp, followed up with his thoughts on humanity.

“Hatred can transform otherwise uneducated people into cruel and merciless killers,” said Lassman. “We must work together to combat it wherever and whenever it raises its ugly head.”

More than 11 million people died throughout the Holocaust during World War II, including 6 million European Jewish people killed by Nazis.

Senior Master Sgt. Loraine Reese, 56th Dental Operations Squadron clinical dentistry flight chief and member of the Days of Remembrance committee, said that observing the days of remembrance reminds Airmen of the Holocaust’s past events and helps ensure that history doesn’t repeat itself.

“We keep the memory of the victims and survivors of the Holocaust alive because we owe it to them to do better, to learn from that tragedy and ensure that it does not happen again,” said Reese.