McSally, a retired Air Force fighter pilot, told Ram that she is always honored and inspired to spend time with men like him, members of the Greatest Generation.

“It’s never too late to give honor where it’s due,” McSally said. “This is well-deserved.”

Ram was living in Nogales with his five brothers and two sisters when he left high school to join the Army in 1940, lying about his age to get in. He was honorably discharged the following year, but re-enlisted when the Japanese attacked Pearl Harbor in December 1941.

In July 1942, Ram graduated from the Army Air Forces Technical School in Scott Field, Illinois. He then went to gunnery school at Harlingen Army Air Force Base in Texas, and in August 1942, Staff Sgt. Ram graduated from the aerial gunner’s course and was sent to Davis-Monthan Air Force Base as a B-24 radioman/gunman. Eventually, he was assigned to Bassingbourn, England, and in April 1943, at 19, Ram was the radio operator on the B-17 named the “Helno-Gal.”

During his third bombing mission, Ram’s B-17 was crippled by an attacking German fighter and was forced to crash land. They were quickly rescued by Allies. It was this mission for which he was recognized in the Aug. 20 Purple Heart presentation.

Twenty-three days later on his fifth bombing mission, he and his aircrew were shot down over Kiel, Germany, where he began his year and a half as a prisoner of war. Ram received his first Purple Heart for his time as a POW.

A crew member had thrown him from the crashing plane and he parachuted into enemy hands.

He was held in a civilian hospital in Kiel and eventually ended up in an interrogation center in Frankfurt.

Ram recalled being interrogated over and over at gunpoint, but refusing to give information other than his name, rank and service number. His face was badly burned, he said.

Ram was moved to a prison hospital in Berlin for four months where his burns were treated. He later was moved by train to Stalag 7A, Germany’s largest POW camp, north of Moosburg in southern Bavaria. He remained there until October 1943, when he and other POWs were transferred by troop train to Stalag 17B near Krems, Austria.

The food was horrible and there was no glass in the windows, Ram said. They slept on wooden beds.

They marched more than 300 miles, Ram said. He lost six toenails because his shoes couldn’t protect him from the rain and snow.

He also recalled seeing a long line of Jewish prisoners and remembering how “big and strong” he and his fellow POWs felt compared to them.

“There was nothing left to them,” he said.

One fell in front of him and he was just about to give him some water when one of the guards shot him dead, Ram said. He wasn’t the only one who was shot, Ram said. The guards left a long line of dead Jewish people because the prisoners simply couldn’t make it any further.

The POWs were liberated two weeks later, on May 8, 1945, by Patton’s 13th Armored Division near Braunau, Austria.

Ram remembers how happy he was to get home to Nogales, but then received the news two of his brothers died in the Pacific while fighting the Japanese, and his father was dying of cancer.

Ram finished high school and went to college, earning a degree in business administration. He and his wife, Katherine, spent much of their life in Tubac and Nogales. They were married 62 years before she died in December 2014. They have three sons and six grandchildren.

Ram, who now lives in Tucson, said he and his fellow Airmen never thought about medals.

“Every time our commanders sent us on a mission they knew we weren’t coming back and we knew that too,” Ram said. “We just went ahead. Nobody was afraid. Nobody thought anything of it. We just knew we had to destroy the target, whatever it took. I lost a lot of good friends over there. A lot of good friends. It was like a Band of Brothers.”

Contributions to this article were provided by the 355th Wing Public Affairs and Kim Smith, reporter with Green Valley News. 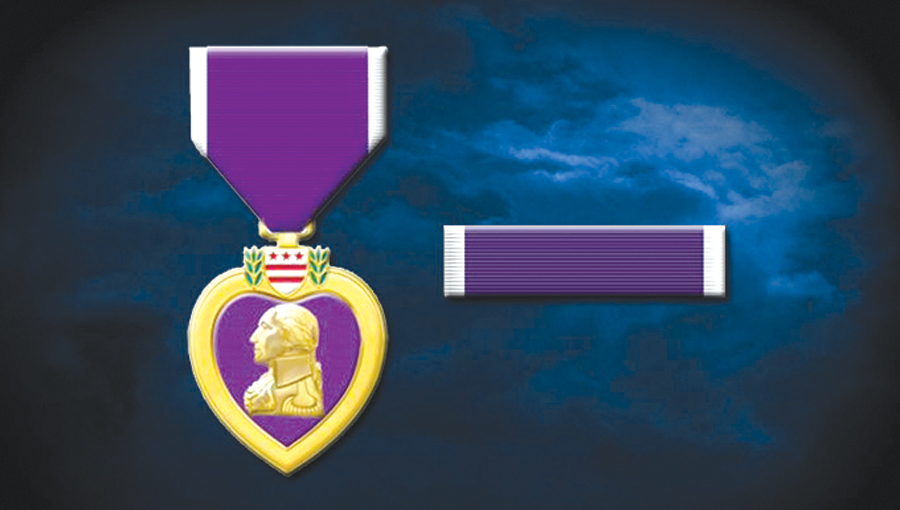 This award, the modern form of the original Purple Heart established by Gen. George Washington in 1782, is also awarded posthumously to the next of kin of personnel killed or having died of wounds received in action after April 5, 1917.