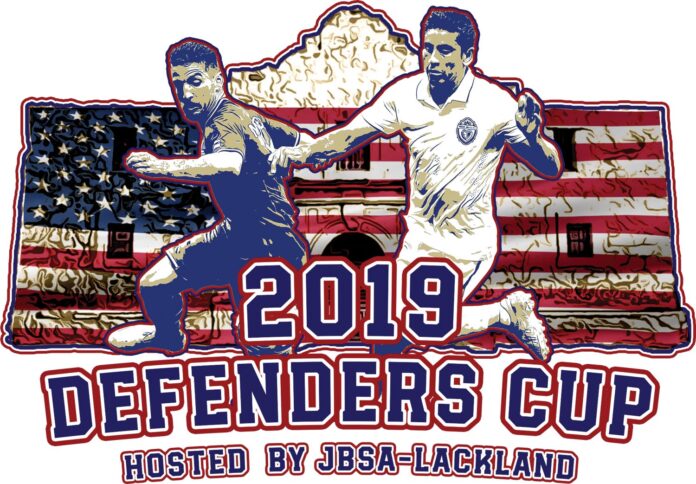 The 2019 Defenders Cup Military Soccer tournament hosted by Joint Base San Antonio was comprised of 34 teams from across the services, including Luke Air Force Base.

Luke’s first opponent was Joint Base Langley-Eustis. Despite early jitters, Luke settled down and worked their possession resulting in Andrew Harding, 756th Aircraft Maintenance Squadron, finishing off a nice move with a clinical goal, 1-0 victory.

Up next, was the JBSA Spartans. As the second half began, JBSA scored a goal. Luke pressed the attack and was rewarded with a goal made by Harding, tying things up at 1-1. Their forward took advantage of an opportunity and, despite the efforts of Christian Bish, 56th Equipment Maintenance Squadron, to stop them, with the last kick of the game managed to shoot past a diving Cristian Rosas, 56th EMS, into left corner. JBSA won the game 2-1.

Fort Leonard Wood was next, and late in the first half, despite their forward miskicking, the shot flew over Rosas’ head and scored. It was 1-0 FLW. Luke was awarded a penalty kick when the FLW keeper punched Harding in the head in the box. Alfredo Villasenor dispatched the PK with ease. Luke took the momentum and finished in control 2-1.

Their first opponent in the knockout stages was Old Timers F.C. Harding scored and put Luke up 1 goal. The Old Timers failed to mount an attack against Luke’s solid defense, led by Eric Rodsa, 56th Component Maintenance Squadron and Charvon De Castro Elder, 56th Civil Engineer Squadron. It was another 1-0 victory for the Thunderbolts.

Luke’s next opponent was Fort Campbell, winners of the tournament two years previous. The 0-0 tie was settled by a penalty kick shoot-out. Rosas denied Fort Campbell twice and sealed the win for Luke.

The semifinals were set between Luke AFB vs. Eglin AFB, and Dyess AFB vs. Barksdale AFB. The five-year streak of Army teams winning the Defenders Cup was broken.

Luke AFB had never made it this far before. Eglin pressed early with an interception passed by Luke defender Aaron Sakaye, 56th EMS, for a 1-0 lead. Eglin doubled their lead at halftime to 2-0. Luke earned two hard-fought goals to tie the game at 2-2. Luke prevailed 4-3 in a penalty-kick shoot-out and advanced to the final.

Luke faced Barksdale in the final. Early in the second half, Barksdale made a mistake by knocking the ball to an all-alone Andrew Harding who beat the Barksdale keeper. Unfortunately, the assistant referee signaled offside. Luke was caught by a counter-attack when Barksdale shot a goal and took the lead. Luke was stymied and the referee’s whistle blew to signal the end of the game. Elation for Barksdale, disappointment for Luke.

Every scarf tells a story