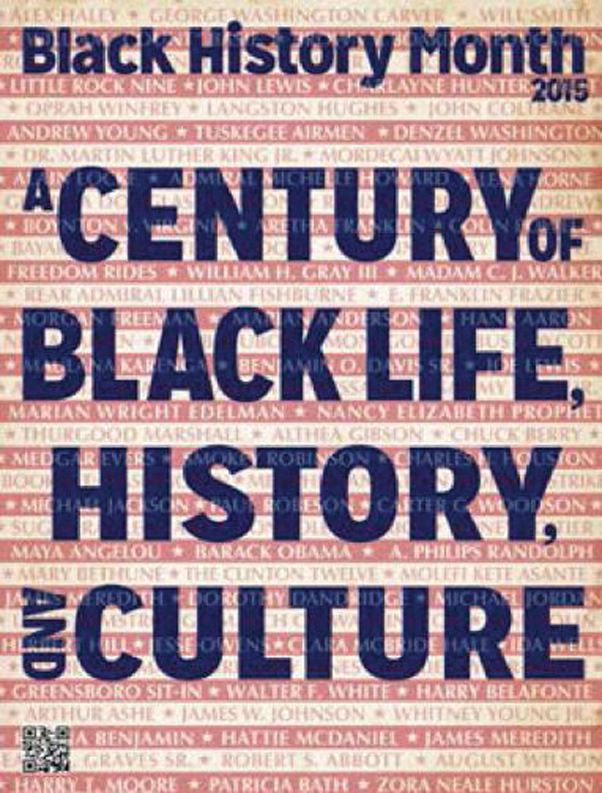 “The idea for this year’s poster came from the Association for the Study of African American Life and History’s Theme Executive Summary, proclaiming A Century of Black Life, History, and Culture as the 2015 National Black History Theme,” said Mr. Peter Hemmer, DEOMI Illustrator. “The theme is represented by the use of 100 names gathered from various professions and events to signify 100 years of history. The flag reference of red and white stripes is used to symbolize America while creating a vehicle for organizing the text,” he said.

Over the past century, African American life, history, and culture have become major forces in the United States and the world. In 1915, few could have imagined that African Americans in music, art, and literature would become appreciated by the global community. Fewer still could have predicted the prominence achieved by African Americans, as well as other people of African descent, in shaping world politics, war, and diplomacy. Indeed, it was nearly universally believed that Africans and people of African descent had played no role in the unfolding of history and were a threat to American civilization itself. A century later, few can deny the centrality of African Americans in the making of American history.

This transformation is the result of effort, not chance. Confident that their struggles mattered in human history, black scholars, artists, athletes, and leaders self-consciously used their talents to change how the world viewed African Americans. The New Negro of the post-World War I era made modernity their own and gave the world a cornucopia of cultural gifts, including jazz, poetry based on the black vernacular, and an appreciation of African art. African American athletes dominated individual and team sports transforming baseball, track-and-field, football, boxing, and basketball. In a wave of social movements, African American activism transformed race relations, challenged American foreign policy, and became the American conscience on human rights.

At the dawn of these strivings and at all points along the road, the Association for the Study of Negro Life and History, now the Association for the Study of African American Life and History (ASALH) has played a vital role. When he founded the Association in 1915, Carter G. Woodson labored under the belief that historical truth would crush falsehoods and usher in a new era of equality, opportunity, and racial democracy, and it has been its charge for a century. In honor of this milestone, ASALH has selected “A Century of Black Life, History, and Culture” as the 2015 National Black History theme.

They are located at 366 Tuskegee Airmen Drive, Patrick AFB, Florida 32925. Find them on social media at www.Facebook.com/deomi.dod or www.youtube.com/User/deomipublicaffairs/feed.)