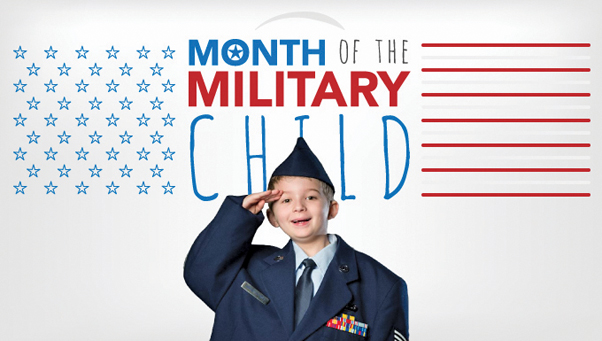 WASHINGTON (AFNS) — To highlight the year-round contributions, courage and patriotism of the military community’s youngest members, the Defense Department observes April as the Month of the Military Child, said a Pentagon official.

Established by then-Defense Secretary Caspar Weinberger in 1986, the month recognizes some 1.9 million U.S. military children ranging in age from infants to 18 years old, who have one or both parents serving in the armed forces, said Barbara Thompson, the director of DOD’s Office of Family Readiness Policy.

“We want to highlight their sacrifices (and) support of the military member in their families, so it behooves us to take time from the busy calendar of our events and recognize military children,” she said.

Permanent change of stations, deployments and training activities, among other facets of military life, can present unique challenges to children who must constantly adjust to distance, unfamiliarity and uncertain schedules, Thompson explained.

“That can be a real sacrifice, because each parent is a very important part of that child’s makeup,” she said. “So we want to make sure that when they move or change schools, (that) all of those transition times are supported with resources, programs and services.”

Military OneSource is a resource available 24/7, 365 days a year, to support parents to learn more about parenting skills, as well as to find support for themselves, Thompson said. It also offers telephonic, face-to-face, online and video nonmedical and financial counseling, which she described as “strengthening pillars” for military households separated from extended family or settling into a new environment.

The Airman and Family Readiness office at March Air Reserve Base is an excellent place to find resources for your family. They can be reached at 951-655-5322.

“There is no ‘wrong’ door,” Thompson said. “So regardless of where you’re seeking support, whether it’s with your pediatrician or with your chaplain, he or she will also know the resources to support you in your efforts to navigate the military life course.”

Community outreach initiatives include partnerships with the Department of Agriculture and the National Institute of Food and Agriculture’s 4-H youth group to promote “Purple Up!” on April 15, Thompson said. Students, school sports team members, teachers and community leaders will wear purple as a visual tribute to military children.

“It is hard to be a military child, and they’re doing it super well,” Thompson said.