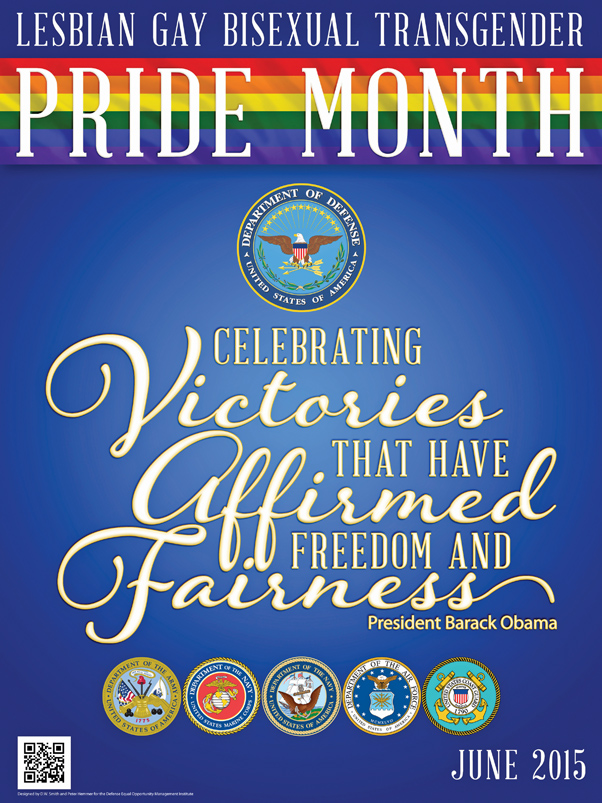 Diversity is one of our nation’s greatest strengths. During Lesbian, Gay, Bisexual, and Transgender (LGBT) Pride month, we celebrate our rich diversity and renew our enduring commitment to equity. The dedication and contributions of our Lesbian, Gay and Bisexual (LGB) service members and Lesbian Gay Bisexual Transgender (LGBT) civilians have had immeasurable impact on our National Security and the Department of Defense (DOD).

Our nation was founded on the principle that the individual has infinite dignity and worth. The DOD, which exists to keep the nation secure and at peace, must always be guided by this principle. In all that we do, we must show respect for the serviceman, the servicewoman, the civilian employee, and family members, recognizing their individual needs, aspirations, and capabilities.

This month we acknowledge the painstaking labor of Americans—sung and unsung—whose personal sacrifices and determination were instrumental in the struggle for civil rights.

On June 2, 2000, President Clinton issued Proclamation No. 7316 for the first Gay and Lesbian Pride Month. “This June, recognizing the joys and sorrows that the gay and lesbian movement has witnessed and the work that remains to be done, we observe Gay and Lesbian Pride Month and celebrate the progress we have made in creating a society more inclusive and accepting of gays and lesbians.”

June was selected as Pride month to commemorate the events of that month in 1969, known as the Stonewall riots—an event that lasted three days. The Stonewall riots were recognized as the catalyst for the Gay Liberation movement in the United States. Patrons and supporters of the Stonewall Inn in Greenwich Village, New York, resisted police harassment of the LGBT community, although the struggle for civil rights in the LGBT community actually began much earlier.

Dr. Frank E. Kameny fought for gay rights more than a decade before the Stonewall riots. He served in World War II, and later as a civil service astronomer with the U.S. Army Map Service. According to the Library of Congress, Kameny was fired and banned from federal employment in 1957 because he was gay. Not only was he released, but more than 10,000 gay and lesbian employees were forced out of their jobs during the 1950s and 1960s.

He decided to sue and lost. He appealed and lost again. He brought the first civil rights action regarding sexual orientation to the Supreme Court of the United States, arguing that the government’s actions toward gays were “an affront to human dignity.”

The Court denied his petition.  He persevered and continued to fight for civil rights for 18 years, until the U.S. Civil Service Commission reversed its policies excluding homosexuals from government employment.

Fifty years after he was fired, the U.S. Civil Service Commission issued Kameny a formal apology for being fired solely on the basis of his sexual orientation. Before his death in 2011, he said, “All I can say is from the long view, 50 years, we have moved ahead in a way that would have been absolutely unimaginable back then.”

On June 1, 2009, President Barack Obama issued Proclamation No. 8387 for Lesbian, Gay, Bisexual and Transgender Pride Month. In this proclamation the President pointed to the contributions made by LGBT Americans both in promoting equal rights to all regardless of sexual orientation or gender identity. He ended the proclamation by calling upon the people of the United States to “turn back discrimination and prejudice everywhere it exists.”

Effective March 27, 2015, the Family and Medical Leave Act, or FMLA, extended coverage to all legally married same-sex couples to take FMLA leave to provide care for their spouse.

Previously, the definition of “spouse” under FMLA was defined by the state law where the employee resided. In February 2015, the Department of Labor issued a Final Rule to revise the definition to encompass legally married same-sex couples, regardless of where they live or work. The definition is no longer focused on an employee’s “state of residence” but instead the “place of celebration,” which is the location where the marriage was entered into.

For information about the military family leave provisions of the FMLA, visit: