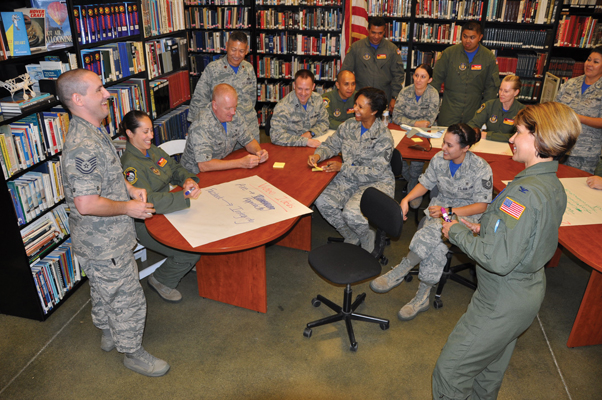 The 452nd Aeromedical Evacuation Squadron held its first Strategic Planning meeting, August 18-20 at the March Field Air Museum. The meeting, which identified areas needing improvement, will be conducted every three to five years in order to check the unit’s progress on those and other critical issues, said Col. Monsita Faley, commander.

I attended a three-day senior leadership development course recently, and asked Lt. Col. Scipiaruth Curtis, an AFSO-21 black belt, if she would facilitate training for my unit, Faley said.

The goal of the meeting was for squadron leadership to identify issues, set goals and determine the steps it would take to reach those goals, Faley said.

“Representatives from our Executive Management Committee attended,” Faley said. They are pre-identified leaders and those who have important processes. We also included those who play and important role in the squadron, such as ARTs (Air Reserve Technicians) for continuity. They have a lot of interface with members and see a lot of what’s going on in the unit.”

“It was very helpful for us all to get our ideas together,” said Senior Airman Brandi Myers, squadron aviation resource manager who has been with the unit for two months.

It was most helpful figuring out ways to get their financial system going, Myers said. They need to market themselves better to show what they do and how important their jobs are so they can get funded for more training, she said.

“If there were to be a real world situation, they would need us to go get people who are injured,” Myers said. “Without us there would be no one to do anything medically,” she said referring to their global capabilities.

This is the first strategic planning meeting Senior Airman Robert Kirby, medical administrative specialist and ART, has been involved with.

“I think it went fantastic!” Kirby said. “We were able to critically analyze ongoing issues and set goals for the unit.”

Kirby, who has been in the unit for two months, said one issue that will impact him the most is the funding issues.

“I have to write the orders, so it’s a juggling thing to try to get everyone funded to get exactly what they need.”

Understanding everyone’s skill sets and observing everyone participating in the problem-solving process is something Capt. Brian Goehner, flight commander of medical readiness and executive officer, said he got out of the meeting.

“It was successful on a number of fronts,” he said. “We were able to take a problem-solving process and apply it to some issues we have in our unit, and find some tangible actions that we can take to improve our unit overall, complete with action items, timelines and deliverables.”

One of the top issues identified was training, Faley said.

After recrafting their vision and mission statements so they were in line with Air Force Reserve Command’s and the 452nd Air Mobility Wing’s statements, Faley said they looked at their key processes to make sure they were in line with what their unit wanted. Brainstorming then led them to identify a gap in how they prepare and plan to send their people for annual tour, she said.

“We weren’t as mission-ready as we wanted to be, so the solution was to focus on training.”

In doing so, they determined that the main problem was task saturation, in other words, there were too many tasks, which resulted in lower morale and lower readiness, Faley said.

“The root causes were time management, accountability and motivation,” she said. “That’s where the idea for films came out.”

They decided to make some short films acting out scenarios that supervisors might have to deal with, showing the right and wrong way to communicate, be accountable, manage time and motivate.

“We think there has been a lot of unclear communication. Supervisors haven’t been as engaged, and holding their troops accountable,” Faley said.

They determined a lot of supervisors may not be comfortable with their role as a supervisor, and that the films will help them learn to motivate, delegate appropriately, and communicate better, Faley said.

The concept of films is novel and never been done before in the squadron, said Goehner. He hopes squadron members will remember the videos and their content.

People respond more to visual and comedy versus sending them an email, said Myers. They probably wouldn’t read it, she said. “Video will engage them more.”

“The end goal is to provide communication. We will show them during the commander’s calls and then post them on our internal share point sights,” Goehner said.

Although they haven’t gone far enough down the road to post the films so members might have access to them from home, he said that is a discussion they need to have going forward.