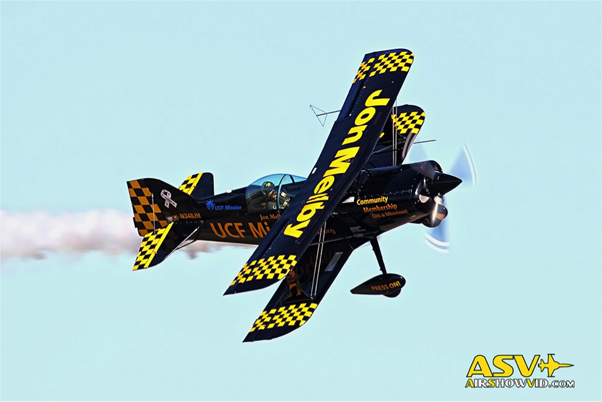 The aircraft I fly is the awesome looking Black and Yellow factory built Pitts Muscle Bi-Plane.  The Pitts S-1-11B! Imagine sitting in a Formula One race car that has wings. Pretty much, that is how I can describe my plane. I really like having horse power at my fingertips. My airplane has that, plus it is very light weight. It’s a really loud plane that is absolutely fun to fly.

There are only two factory built S-1-11B aircraft flying in the world today. With a 330+ H.P. six cylinder Lycoming (AEIO-540) motor, Cold Air Induction, 10.5 to 1 High Compression pistons, and 3 bladed Hartzell Claw Propeller, this aircraft has all the ingredients for a great airshow performance. The S-1-11B has only a single seat and it is very light weight (1185 pounds dry), providing a perfect platform for flying high energy aerobatics! The Pitts bi-plane is made of metal tubing frame, wood spar/ribs, and mostly fabric covering. This helps keep the airplane light weight. However, fabric is sensitive and can quickly puncture if not careful!

The smoke you see behind the airplane is created with special oil which is the same consistency as salad oil. Usually using Chevron Canopus 13 or Shell Dialys-ax grade of oil. This is stored in a 10-gallon smoke tank located under the main fuel tank. The smoke oil is pumped to the aircraft exhaust via a standard automotive type fuel pump. Once the oil hits the hot exhaust pipes, bingo—it turns into smoke! The oil does not catch on fire as long as the aircraft is moving.

With the speed, agility, and on-board navigation systems, I can fly my Pitts Bi-Plane to any show in North America!! With a transport container, the Pitts can easily be taken apart and shipped to anywhere in the world. Hopefully someplace exotic.

His flying career began as an 8-year-old, when during the fall season, he dove like a bird from the edge of his roof into the pile of leaves he had placed on the ground. This stunt was followed by a huge round of applause from the kids in the neighborhood who had gathered, and an airshow pilot was born. By 12 years of age, the airshow pilot bug had bitten him, thanks to the inspiration he received from Bob Hoover at one of Hoover’s performances. At 15, Melby began flying a non-powered glider, and after only eight flights, he soloed.  At 19, Melby bought his first plane, a Cessna 150, and then hired an instructor to learn to fly it. He got his license and about 14 years later learned what he had to do to become an airshow pilot. With more than 35 years of flying experience, Melby holds an Airline Transport Pilot rating, and is surface-level and formation-aerobatic qualified. He has flown dozens of aircraft.

When not performing, Melby is a technical senior manager for a major stock brokerage firm, as well as executive director for Salute-A-Vet, a non-profit that honors Veterans through action. Other activities include weekly ice hockey, golf, snow skiing, playing guitar in his church band, traveling, and family time. To learn more about Melby, visit http://jonmelby.com.