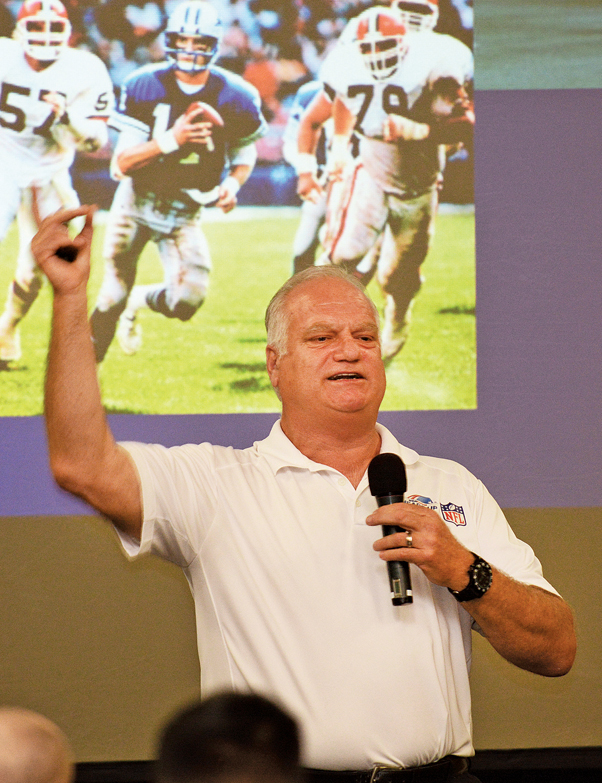 Speaking about personal success and the best of times – most can do that.

Describing the account about the suicide of a son – not a common occurrence.

When hearing of both from the same person, the juxtaposition can be stirring.

Eric Hipple shared just those experiences with the National Training Center and Fort Irwin community during four presentations, Sept. 1-2, to initiate a campaign of suicide awareness and prevention – which the nation and the Army observes during the month of September. He serves as an outreach coordinator for the Depression Center, University of Michigan and talks to groups about suicide awareness and prevention.

Mr. Hipple was accompanied by his daughter, Tarah Hipple, who also spoke about her experience dealing with the suicide of her brother Jeffrey Hipple in 2000. He was 15.

Mr. Hipple received the phone call while on a business trip informing him of the death of his son. He spoke with his high school-aged teen, before departing on that trip, and said they would talk about his son’s sense of not feeling well. That conversation never took place.

Twenty years prior, Mr. Hipple had been informed he would be drafted by the Detroit Lions of the National Football League. In 1981, at the age of 23, he was starting for the Lions. He had reached, what many consider to be, the pinnacle of American professional sports.

After retiring from football in 1989, Mr. Hipple sold insurance and actually made more income than in the NFL; but he lived with depression and attempted suicide.

Mr. Hipple explained that after his son’s death, he drank heavily and spent 58 days in jail after being arrested for drunk driving. While in jail he realized he was deferring and engaging in risk-taking behaviors.

“I’m here because my son died and I have an excuse to be here … I don’t want this to be my son’s legacy or my legacy,” Mr. Hipple remembered thinking in jail.

Mr. Hipple wanted answers. He wanted to know what happened to his son and himself.

He found out that the brain can be impacted by injury, illness, trauma and stress. The brain’s core mission is to solve problems, he said. When it can’t, symptoms can set in. Those include sleep problems, loss of pleasure, appetite, loss of concentration, irritability, anger, isolation, anxiety, pain, sadness and hopelessness.

People might start coping by participating in alcohol or substance abuse, and risky behaviors and then thinking of suicide, said Mr. Hipple.

Mr. Hipple stated that intervention is crucial. It is important to not get complacent with people we’re familiar with – continue to observe peers, friends and family. Bystanders can: notice an event, interpret as an emergency, take responsibility for acting, decide to act, and act to intervene. Intervention can lead to saving a life.

Sgt. 1st Class Audrey Davis, non-commissioned officer-in-charge of S1 personnel with Lizard Team, Operations Group, related to the Hipples’ experiences, she explained, because a cousin committed suicide and her family had not perceived signs of trouble. She remembered her cousin as “having it together” and her suicide as shaking “the ground of our family.”

“It definitely connected to my own family situation,” Davis said. “We all have to be cognizant and mindful with the people that are around us and be in tune with them, not be afraid to connect with people … we still need to make those connections to save lives.”

Davis expressed gratitude to the Hipples for their contribution and openness.

“I appreciated them sharing their story,” Davis said. “We’re all human beings and so to re-live and re-tell stories that come from a painful place, sometimes those emotions can resurface. But the fact that they unselfishly shared those stories knowing that there’s a chance that they’re going to re-visit those painful moments, it just spoke a lot to me and I appreciated them tremendously for that.”

You have to start with a dream