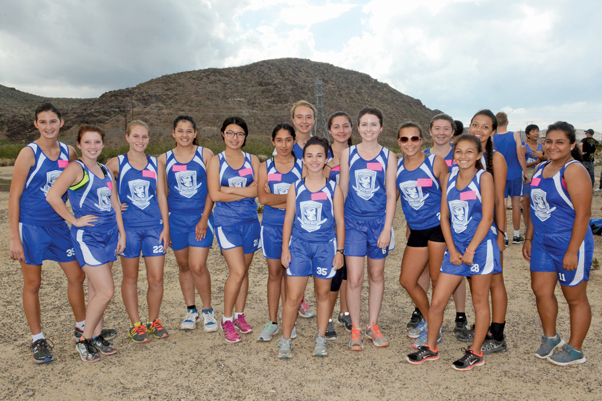 Student athletes cheered and shouted motivation to their teammates and competitors as they ran during a cross country meet hosted by Silver Valley High School in Yermo, Calif., Sept. 15.

The home team, the Trojans, hosted runs for girls and boys in the non-league meet (the school competes in the Desert Mountain League). The Trojans fielded a female team of 15 girls and a male team of 13 boys, said Alex Seegrist, assistant coach and ninth grade biology teacher.

The visiting teams came from the following: Academy of Careers and Exploration of Helendale, Calif.; Apple Valley Christian; Boron; California City; Cobalt Institute of Science and Math of Victorville, Calif; Desert of Edwards, Calif., and; Excelsior of Victorville.

Annadee Losch of Apple Valley Christian was the fastest girl with a time of 21:57 minutes and her school mate, Robert Saieg, was the first boy with a time of 18:07 minutes.

The first female runner for Silver Valley to finish (placing fourth) was Hope Stephens, a ninth-grade student and military family member. Hope’s time for the course, just under three miles, was 23:36 minutes.

Hope said the time is her best. She prepared by doing “a lot of conditioning and a lot of running.” She stated her team performed well on a good course.

“I felt we did pretty good today,” Hope said. “The track was really fast.”

Faith said she was very proud of Hope for her run time and dedication.

“She’s worked very hard,” mom said. “She has had a lot on her plate. It’s really helped develop her time management.”

Coming in at 20:30 minutes was Bryce Kim for the Trojan boys. A sophomore and military family member, Bryce said the hills “were a little tough.” He has run in cross country for two years and also competes in track. Bryce’s father, Maj. Samuel Kim, serves with Operations Group here.

Bryce gave credit to head coach Chris Greene and Seegrist, and described his team as supportive.

“Our coaches our great – they always push us at practice and make sure we give a 100 percent effort every single time,” Bryce said. “Our team, we just like to support each other and we all love running. Sometimes we’re tough on each other, but to help push each other. We just help each other get better every day.”

Mike Meyer, athletic director at Silver Valley, also praised the coaches, who are coaching the runners for the first time. He emphasized that there is higher participation in the female team this year and the top runners are freshmen. He also explained that league meets begin in October.

Faith expressed that parents have helped by attending school activities and that the students would love even more attendance.

“You’re not going to find a more supportive group of parents, anywhere in this area, I would dare to say,” Faith said. “The parents – at anything I’ve gone to – whether at (Fort Irwin Middle School) or here at Silver Valley High School, are very supportive, in all the events.”