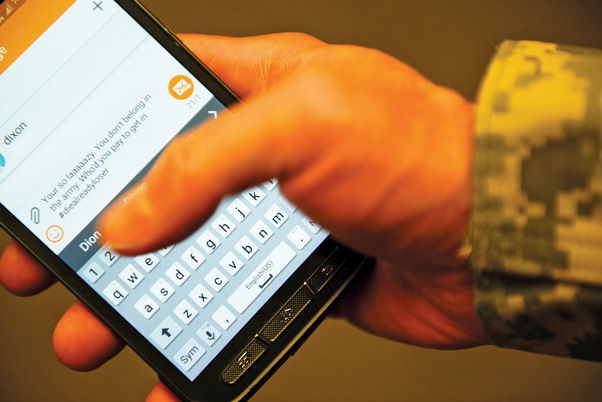 Most of us are connected to others wirelessly, either through social media, or by way of a simple text message.

Eight years since the debut of the iPhone and approximately 25 years since the proliferation of the Internet, there are some things we should be aware of regarding our behavior and safety when using a computer, tablet or smartphone.

Command Sgt. Maj. Carlos Esmurria, command sergeant major for Fort Irwin United States Army Garrison, recently addressed two topics of significance for Soldiers and the Army community: online conduct and texting while driving. Both are covered by Army regulations and post policies, and violations can lead to consequences. However, appropriate conduct using technology follows along the lines of traditional interactions with peers, subordinates and supervisors.

In July, the Army issued an all Army activities message (ALARCT) explaining that the use of electronic communication in an official or personal capacity must be consistent with Army values and standards of conduct.

The ALARCT also described online misconduct as the use of electronic communication to inflict harm.

Esmurria explained that the ALARCT outlined examples of harm, to include: harassment, bullying, hazing, discrimination, retaliation or any other type of misconduct that undermines dignity and respect.

The senior non-commissioned officer at USAG agreed that online misconduct is inconsistent with the Army Values. He also stated that there are ways that electronic devices can be used to perform unprofessional acts of misconduct by the type of message being sent.

Army regulation 600-20, Army Command Policy, devotes a section to the treatment of persons and the consequences of violating that policy. Paragraph 4-19 states: “The Army is a values-based organization where everyone is expected to do what is right by treating all persons as they should be treated – with dignity and respect. Hazing, bullying, and other behaviors that undermine dignity and respect are fundamentally in opposition to our values and are prohibited.”

The 31-year field artilleryman stressed that the goal of installation leadership is to create an environment that is free from harassment and discrimination, and where people can thrive.

“It is extremely important that people, Soldiers, and Department of Army civilians understand the policy, are educated on the policy, and that leaders, supervisors and managers are enforcing that policy,” Esmurria said. “The goal here is to maintain the good order and discipline of the installation and create a healthy and productive environment. On-line misconduct, sets us back, it just eats away at professionalism and it eats away at good order and it creates divides, and not unity, across an organization.”

Esmurria was also firm about the unprofessionalism of texting while driving, which is illegal in California.

If there is any doubt of texting and driving on DOD installations, Army Regulation 385-10, The Army Safety Program, outlines the policy: “Vehicle operators on DOD installations and operators of government-owned vehicles, on or off the installation, will not use cellular phones or other hand-held electronic devices unless the vehicle is safely parked or they are using a hands-free device. This prohibition includes text messaging using hand-held devices. Government-supplied electronic equipment that may be used for text messaging or other hand-held uses is prohibited for use by DOD personnel while driving any vehicle whether or not on official Government business.”

Esmurria expressed strong sentiments, consistent with Army Values, about the perils of texting and driving.

“I think it is an extremely dangerous thing to do,” Esmurria said. “There is so much irresponsibility tied to the act of texting and driving. It’s a clear violation of our policy and those engaged in this practice lack discipline and put responsible Soldiers and families at risk.”

He explained the use of electronic devices – smart phones, computers or video games – at home is completely different than when trying to do the same while driving. People who attempt to do so, put their families, themselves and the public in danger.

Esmurria concluded with a reminder that misconduct, within both topics, can have catastrophic consequences. He stated that it is about the health of the force. All serving here are needed for the important mission of the National Training Center to prepare units for the nation’s security.

“We can reduce and eventually eliminate this type of behavior; to do this we need everyone, and we need everyone engaged,” Esmurria stated. “We need everyone with their professional caps on to tackle this through education of the policy and engagement of enforcing standards. It’s about leader engagement.”

Chaplin’s Corner – The Power of patience