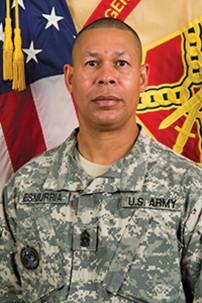 “It’s been an immeasurable experience being in the Army this long, but it’s been a fulfilling time – the entire time.”

Those are the words of Command Sgt. Maj. Carlos Esmurria, the senior enlisted advisor for United States Army Garrison at Fort Irwin. By Dec. 16, he will have been in that position for two years and two months.

That day, the garrison organization will bid farewell and formally acknowledge Esmurria at a change of responsibility ceremony. In April of next year he will have served 32 years in defense of the nation and plans to retire then.

Esmurria has been a Sergeant Major since August 2005, serving in that capacity with brigades – which has been the Army’s unit for combat deployments to Iraq and Afghanistan – and finally in a garrison command team. While he acknowledges there is no specific Army school for garrison leadership assignments, after three decades in non-commissioned officer roles, the Patterson, N.J., native understands that engaged leadership and understanding organizational structure and culture are the keys to leading effectively in garrison.

Esmurria understood early on he had a respect for authority and the military. Even before graduating high school, he made a commitment to the Army to become a Field Artillery Soldier through the delayed entry program, he said. He wanted to be part of something much larger than him. He wanted to be a part of an organization which had lineage and history.

“I wanted to be part of something, part of a team.  Esmurria goes on to say, “I had discipline in my life but I wanted structure in my life as well, and the Army was the vehicle for me to become a better person. In essence, to become whole.”

After just a few years as a junior Soldier and while stationed at Fort Lewis, Wash., Esmurria recognized what great leadership looked like and decided that was what he wanted to emulate. He vividly remembers the persona and professionalism of Staff Sgt. Cornelius Young, a Vietnam Veteran and Esmurria’s first true mentor. Young was the catalyst for Esmurria’s desire to be a leader of Soldiers and at the highest levels as well – as a sergeant major.

“He was my first, most influential person in my career that made me who I am today and really the motivator for me to say, ‘You know what, I’m going to make a career out of this, and that was fantastic’,” Esmurria said.

A successful career in the Army and advancement to leadership roles has a lot to do with character, Esmurria stated as advise to junior Soldiers.

“You have to live the Army Values and you have to truly understand this profession that you’re in, because it is a unique profession if you have decided to stay in for the long haul.”

Esmurria adds that career Soldiers must be life-long learners. The only way to grow is to learn and seek out education. Expecting others to provide answers is not the correct approach.

“You have to be responsible enough and accountable enough to read, to educate yourself, to see where the Army is going and to maneuver yourself to make the right decisions to further promote yourself in whatever goals you have to someday become a senior leader in the Army,” Esmurria said.

Simply being in a leadership role does not automatically ensure success, according to Esmurria.

“You have to be a very dynamic leader,” Esmurria stated, almost as a challenge to today’s NCOs.

Leaders must always push themselves, be innovative, and agile – all the while being able to motivate Soldiers, said Esmurria. Leaders must continue their education and read doctrine.

“If you’re not reading, you’re not developing – if you don’t understand, how can you lead change?” Esmurria asked.

Esmurria reminds leaders the new Army Operating Concept doctrine states the Army must win in a complex world. However, first and foremost, leaders have to believe in the concept, believe in the profession and live the Army Values. By internalizing those principles, you create commitment and loyalty and devotion to the Army and its mission.

That commitment and devotion must extend to individual organizations within the Army to ensure growth and success for the organization and the ones being served. For Esmurria, most recently that has meant understanding and then applying leadership processes to USAG Fort Irwin.

“The way we have collectively as a team come together to support the [Fort Irwin] community and to accomplish the mission – that has been impressive,” Esmurria said in reference to challenges garrison has dealt with the past two years.

Some of those challenges included flooding in 2013, power outages, and other storm damage. Esmurria said those trials were tackled by a team that is mostly civilians.

“We have some folks here in our organization, who are truly extremely passionate and very professional in the way they carry themselves and work ethic, and what they provide the community,” Esmurria said. “I’ve seen it time and time again with different things.”

In addition for his appreciation of the professionalism of the workforce, Esmurria stated other notable takeaways include: the sheer amount and diversity of missions handled by USAG directorates that fall under the overarching objective of providing quality service and making Fort Irwin a community of excellence; understanding and being extremely appreciative of the complexity of the USAG mission and how it affects this city, and; understanding how new command teams – every two years – have an impact on the workforce, which has to make adjustments accordingly.

As his time with garrison nears a conclusion, Esmurria recalls rewarding experiences.

“One of the biggest fulfillments of my time spent here is the development of our workforce,” Esmurria said. “Our workforce has developed considerably. They think differently now. They think more on a strategic sense and they understand the way forward and they’re truly looking at themselves and how they can be of better of service to the team.”

Esmurria feels satisfaction for being part of command teams that have overseen progress and creation of the Resiliency Center, the new water treatment plant, solar energy infrastructure, a waste to energy plant, and the new hospital. All that construction equates to two things – growth and quality of life – and that is extremely important, he stated. The improvements resulted from active, engaged and competent leadership, of which he was a part.

The command sergeant major also expressed fulfillment in community relations opportunities for Soldiers and families, such as FOX NFL trips and tickets to events. It’s part of taking care of Soldiers, families, civilians and contractors. Every day we take care of people, he stated.

“It’s been a sense of pride for me that I’ve been part of this journey here at the National Training Center and United States Army Garrison that has truly had an impact and an effect on Soldiers and their families through what we provide – whether it’s customer service, resources – through people and programs – or whether it’s based on infrastructure or where they live or where they work and the resources they use to get their job done,” Esmurria explained.

Just as a young Esmurria wanted to be part of something larger than him, those who serve here have that opportunity.

“We have been here since 1940, testing our skills in the desert and dropping ordnance in one way or another,” Esmurria said. “This is a military tradition, to hone your skills and then come out here and try your skills at defeating our OPFOR. It’s our lineage at the NTC to Train the Force, it’s how we our part of the Army’s history. Every day that you’re here regardless of what your job is, you’re making history for the Army. Whenever a unit is conducting combat operations abroad, it can be directly linked to some Soldier or team here at the NTC or the other two CTCs.”

He added that an assignment here gives Soldiers invaluable opportunity for growth, especially towards leadership development. Soldiers will not get broader experiences and engagements with different organizations in the training area anywhere else, except for combat; and the NTC is as close to combat as a Soldier can get.

“Combat and the outcome of combat or the outcome of war is shaped right here,” Esmurria said. “We’ve done very well wherever we’ve been serving in times of conflict, because of the preparation that goes on right here. This is a very special place and it will always hold a special place in my heart, because of what we do here and how we do it and the level of professionalism in all the things we do to truly train the force and make them a true tool for deterrence or for war.”