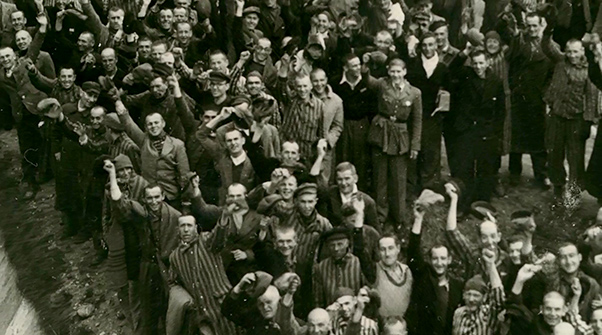 Ernest Gross, 19, was in a long line of other prisoners awaiting certain death in the Dachau gas chambers and crematorium that lay ahead. He did not care. All but two brothers and a sister from his family of nine had been exterminated earlier by the Nazis.

Gross was starving to death. He weighed only 85 pounds and was emaciated after a year of sickness and abuse. As he looked up, he noticed that the sky was completely black. The sun had been blotted out by the dark smoke from the chimneys of the crematorium ovens where dead bodies were being burned. Death would come soon. Death would be a relief.

As Gross proceeded slowly toward the gas chambers, all of a sudden and for no apparent reason, the Nazi SS guards threw down their weapons and started to flee. U.S. Soldiers were arriving.

Don Greenbaum, 18, an American Jewish Soldier, was one of the liberators. He was a member of the 283rd Field Artillery Battalion, attached to the 45th Infantry Division, part of Gen. George Patton’s Third Army.

Today Gross, 88, and Geenbaum, 93, spend their time visiting schools and other groups to tell younger generations of the holocaust and ensure that no one ever forgets.

Gross and Greenbaum spoke April 24 to a packed room of Soldiers and Airmen at Joint Base McGuire-Dix-Lakehurst, New Jersey. In “A Day of Remembrance” ceremony, the men shared their stories of survival and liberation at Dachau.

Call to action
About 20 years ago, Greenbum said, he watched a television program in which a guest claimed that the holocaust had never happened. That’s what prompted him to team up with Gross to get their message out. Today, they both still feel a sense of urgency to share their stories.

“In 10 years there will be no survivors living to tell the story about the holocaust,” Greenbaum said. 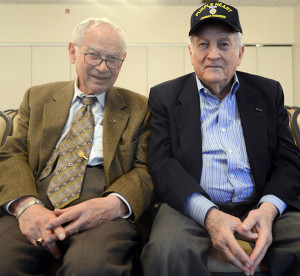 Holocaust survivor Ernest Gross (left) and former Sgt. Don Geenbaum (right) spend their time visiting schools and other groups to tell younger generations of the holocaust and to ensure that no one ever forgets.

Memories of the sight and stench of murdered, mutilated and decaying bodies stored in a dozen railway box cars still sicken and haunt Greenbaum to this day, he said. He was among the first liberators on scene at Dachau. The 45th Infantry Division had arrived just in time to save Gross and about 30,000 other prisoners of war.

Greenbaum
After graduating from high school, Greenbaum was sworn into the U. S. Army. Along with his unit, he marched through Germany and eventually to Dachau.

“I thought we were being sent to capture a German supply depot,” Greenbaum said.

When U.S. Soldiers liberated Dachau, Gross said, he was on the brink of starving to death.

He was only 15 when he and his family were taken from their home, deported to a ghetto in Hungary and eventually packed on a standing-room-only boxcar to Auschwitz in 1942. Later, then-16-year-old Gross was loaded into another boxcar headed to Dachau.

After U.S. Soldiers freed him, Gross was sent to a sanatorium to recuperate. Eventually, due to his age and status as an orphan, he was able to immigrate to the United States in 1947. He later moved to Philadelphia to live near his father’s three sisters and found work in a delicatessen.

After the war, he had three sons and eventually owned three delicatessens as well as a cafeteria and a grocery store.

After the war, Greenbaum returned home to Philadelphia and married as well. He worked in industrial sales throughout his life. He works three days a week still.

Healing
In 2005, Gross was reading the newspaper and came upon an article about Greenbaum’s experience during World War II. Gross contacted Greenbaum. They met in a Philadelphia diner over what Greenbaum described as an “emotional lunch” for both. They have been friends ever since.

Gross said that in order to survive in a concentration camp, he had to learn to be selfish and not share anything, especially his small rations of food. He told the story about a time when his father tried to persuade him to trade his larger slice of bread for a smaller one. Both father and son argued that each needed the larger slice more.

Asked how he managed to recover from all the tragedy he experienced, Gross offered several answers. Over the years, Gross said, he learned to “retrain his brain and not be selfish.” He taught himself to be charitable again. He now looks for opportunities to help others in need whenever he can. 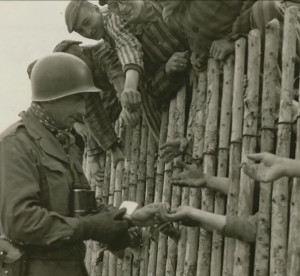 Soldiers of the 45th Infantry Division liberate prisoners at Dachau, Germany, and hand out food in April 1945.

“I try to make 10 people laugh every day,” Gross said. “There is no time to be lonely and depressed. I just get up every morning and move forward.”

Gross advised the people his audience never to spend time being angry.

“When you are angry, your mind does not function right,” he said. “Always laugh and be happy. When you’re happy, your mind works right. So I strive to be happy at all times to keep my mind right.”

He makes it a point always to find someone who is alone and say hi to that person.

Greenbaum believes that a holocaust could one day happen again. He sees parallels between the Nazis of World War II and ISIS today.

“When it was learned the Nazi’s were killing Jews, no one seemed to care much, and nothing was done,” Greenbaum said.

“Today, everyone knows that ISIS is killing Christians, but little is being done,” he added. “That was how the first holocaust started and flourished.”