FORT IRWIN, Calif. — Secretary of the Army Dr. Mark T. Esper underscored his commitment to building an even more agile, lethal and technologically advanced combat force during a visit to the National Training Center Dec. 1.

Just two weeks after his confirmation as the Army’s top Civilian leader, Esper traveled to NTC to observe firsthand how units prepare for battle. Enhancing Army readiness is a top priority for the secretary, and NTC is a key component of that effort. The training center is the proving ground for the Army’s Brigade Combat Teams, where units face the toughest, most realistic combat scenarios at a scale unparalleled by any other environment.

“It’s a privilege for me to come and spend time out here at NTC,” Esper told infantry Soldiers from the 1st Armored Brigade Combat Team, 1st Cavalry Division out of Fort Hood, Texas, which was finishing a training rotation at NTC. “There’s a high-end fight out their waiting for us. This is where we’re going to learn.”

During his visit, the secretary met with commanders and Soldiers to discuss initiatives to grow the mission capability and combat power of Army forces.

One area of focus, he said, is streamlining training tasks so units can dedicate all their time and energy to honing mission-essential skills and maneuvers. That includes eliminating extraneous, irrelevant training and transitioning classroom instruction, as much as possible, into mission-oriented exercises.

Another line of effort is ensuring units receive the resources necessary to widen the United States’ advantage over its adversaries. That effort starts with high-quality personnel, and Esper reiterated that the Army will continue to enforce the most rigorous standards for recruits. He also emphasized the need to get modernized equipment and the latest technology into the hands of Soldiers more quickly, and to ensure that Soldiers have the training and experience to be able to operate and maintain that equipment at the highest level.

The end goal is building a force that can deploy anywhere in the world and win the toughest fights against the most advanced adversaries. That’s where the complex scenarios replicated at NTC come into play.

While its mountainous, Mojave Desert landscape evokes the battlefields of Central Asia, NTC is constantly innovating to simulate the latest emerging threats across the globe — from drone attacks, to contested air superiority, to cyber and electronic warfare that disrupts communications. 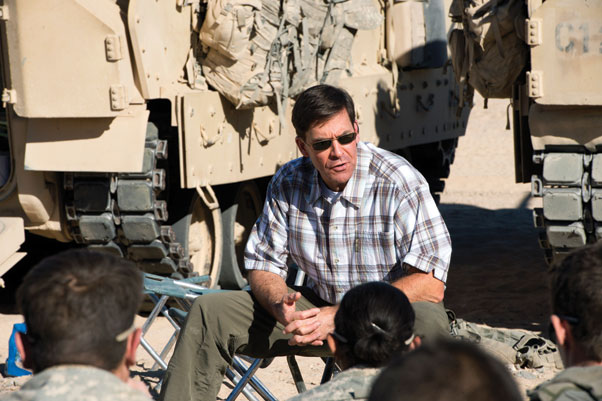 Those threats are added on top of all the other challenges units must confront. Each NTC rotation is designed to encompass the entire spectrum of combat. Among the obstacles units face are a free-thinking, peer-level opposing force, chemical weapon attacks, insurgent and criminal forces, logistical problems, and a suite of ethical dilemmas and distractions presented by civilian role players.

“If you really want a unit to be ready, you have to train at this level and this tempo,” said Brig. Gen. Jeff Broadwater, commander of NTC and Fort Irwin.

The strain of an NTC rotation reveals valuable lessons about which tactics, and which technologies, work under real-world combat conditions. Esper discussed these insights with NTC leadership, as well as with commanders and Soldiers from the current rotational unit. He reaffirmed his dedication to modernizing the Army’s technology to give U.S. forces an edge over the most sophisticated opponents.

Yet even with technological advances, Esper said the Army must remain committed to the mastery of basic warfighting skills, such as reading terrain and navigating without the aid of electronic systems. His sentiment was echoed by NTC leaders, who said the ability to think creatively and implement simple solutions to problems remains the strength of the most successful Brigade Combat Teams.

“We always tell units, there’s no secret sauce, no secret recipe,” said Col. Christopher Norrie, commander of Operations Group. “It’s all about getting the fundamentals right.” 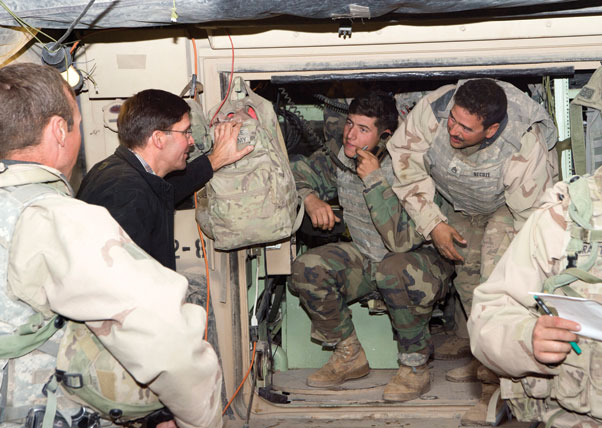 During his visit to the National Training Center Dec. 1, Secretary of the Army Dr. Mark T. Esper heard firsthand from Soldiers about their training experiences.