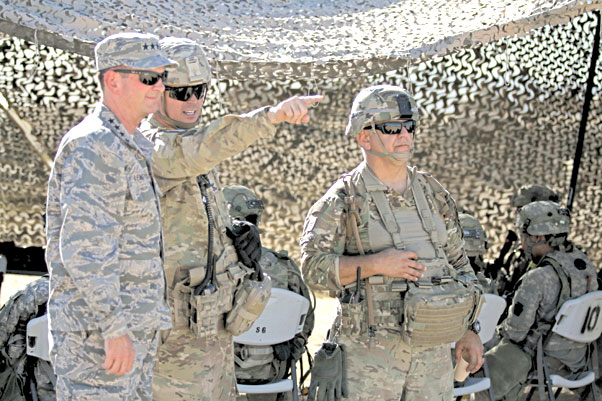 “We all have a single purpose here at the national training center: that is to ensure that they [the training Soldiers] have their hardest day out here in the desert,” said Col. Christopher Norrie, operations group commander at NTC, who wants this training to be hard.

Training at NTC has three separate pillars: a difficult environment, a ruthless opponent and well-planned scenarios. The Mojave Desert supplies the environment, the 11th Armored Cavalry Regiment provides the opponent, and Norrie is responsible for the scenarios.

NTC is perfectly positioned in the Mojave Desert at Fort Irwin, California. The temperature in the Mojave regularly reaches above 100 degrees Fahrenheit in the summer months and possesses difficult terrain for vehicles and Soldiers to maneuver through.

“The second [pillar] is a ruthless opposing force, a ruthless enemy out here”, said Norrie. “They are competing to win.”

The 11th ACR replicate an enemy force that is multi-faceted and familiar with the environment. The Operations Group ensures the final pillar’s strength.

“We focus on the design of the scenario, the training framework”, said Norrie.

These pillars come together at NTC to train Soldiers to a high state of readiness. They put Soldiers in difficult situations, but the payoff is worth it, according to Norrie.

“Our Army is so good, and this training center is just one of many reasons why it is so good”, Norrie said.

The 56th SBCT Soldiers might be having their worst days at NTC, but it is helping them become better Soldiers.