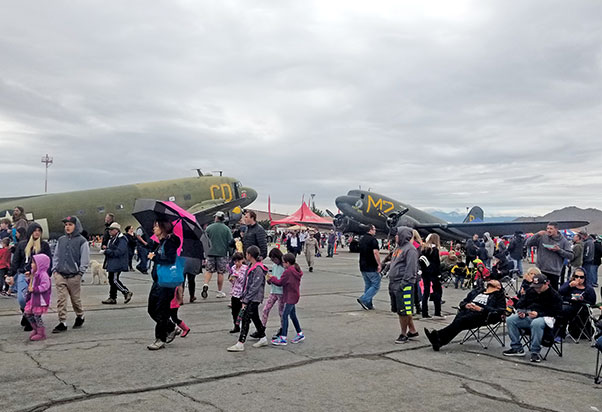 People brought out their chairs, blankets, hats and sunblock to watch the aircrafts and pilots rip through the skies at the 17th Annual Apple Valley Air and Car show. Spectators also had to bring their umbrellas because this year’s aerobatics show was hit with spotty rain and dark clouds—cooler weather that pilots say actually makes for good flying conditions.

Fort Irwin’s Nicole Maynard attended with her husband and two children and didn’t want the rain to put a damper on their day.

“My little one loved being able to go inside the aircrafts.”

Dozens of people approached Vicky Benzing after her swoops and loops through the air in her plane. Being one of just a handful of female airshow pilots in the country, she especially attracted young ladies.

“There may be 150 air show pilots nationwide and I can only think of maybe 5 female pilots.”

“One of the most growing parts of aviation is women learning to fly.”

Harrison said girls and women who are interested in flying, should check out the Ninety-Nines International Organization of Women Pilots.

Benzing flew a 1940 Boeing Sterman, built during World War II to train cadets. She’s been flying for 36 years and her air show performances are sponsored by California Aerospace University.

Erin Curtice of Fort Irwin said this was her first year attending the air show and her one-year-old twins and five-year-old son enjoyed everything from the face painting to being able to sit in the navigator seats of planes and watching the aircrafts do stunts.

“The announcers made watching the planes much more enjoyable as they told us about the pilot, the air craft, and the maneuvers.”

Curtice said they also felt very secure during the show. Safety is always a concern with air shows, following deadly crashes and accidents over the last few years but organizers said this small air show follows the same extensive list of rules and regulations as the largest air shows in the country. The pilots are professional, veteran, accomplished and have been flying for more than 20 years.

Not only did visitors see aerobatics but there were appearances by the Just in Time Skydivers, West Coast Ravens Formation Team, military warbirds like the F4U Corsair, and two P-51 Mustangs from Planes of Fame Air Museum. Besides the excitement in the air, on the ground, there were experimental and vintage airplane static displays and the NAPA Auto Parts Car Display “Show and Shine” and a kids area, where they learned to build airplanes and rockets.

Harrison says the event usually draws about 10,000 attendees but this year’s numbers may have been down slightly, due to the rain.

“We had a great time,” Curtice said. “We look forward to going next year.”

Around the Air Force: April 18