Veterans Day is officially observed on Nov. 11 each year. This is a day to commemorate those who have served. This year’s celebrations had the added distinction of marking the 100th anniversary of the end of World War I. On this day, our nation shows its gratitude with ceremonies, parades and speeches, thanking our veterans for their patriotism.

Such gratitude was not lost to our neighboring town.  Barstow Community Hospital held their annual Veterans Day Celebration on Nov. 7. 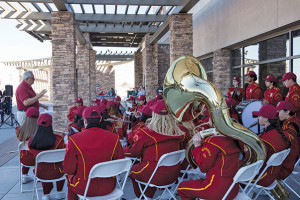 “Words such as ‘courage,’ ‘noble,’ and ‘honorable,’ describe those who have the privilege to don the uniform,” Col. France said. “Those who daily train, deploy and live in harm’s way to provide service above one’s self. This, too, can be attributed to health care workers. You, too, embody the nobility of service, working daily to care for patients, providing a service above self, providing compassion and caring, thanking those who work as health care providers.”

Barstow Community Hospital Director, Joseph Plasse, thanked all branches for their service past and present. Chief Warrant Officer Jeff Smith from the Los Angeles Army Band, sang the National Anthem and the Barstow High School band played each of the Department of Defense’s songs, encouraging those who served in the respective branches to stand and be recognized when their official song was played. Veterans in attendance stood proud in recognition of their branch’s melody.

Barstow Community Hospitals Chief Executive Officer, Audra Earle, acknowledged that the celebration was a tangible way the hospital can say ‘Thank you for your efforts,’ acknowledging the hospital’s veterans staff.  She said that the hospital staff is proud to be providing health care to active duty personnel, the veterans residing at Veterans Home of California and supporting a military community.

France added, “As we embark on another day of celebration, thank those who strive daily to keep us free”, thanking the veterans in the audience and personally acknowledging the Korean, and Vietnam veterans in the attendance.

After the ceremony, those in attendance were welcomed into the hospital to view a celebration wall, adorned with photographs of veterans that read, “We live in the freedom we were given by their sacrifice”.