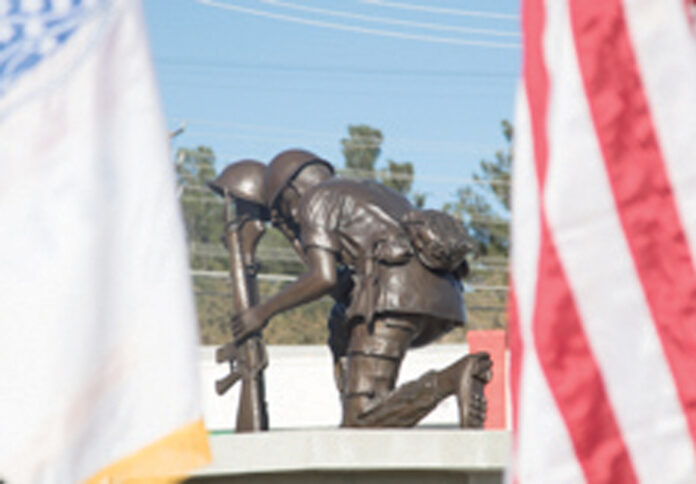 VICTORVILLE, Calif. — Veterans Day is a day where we honor and remember the men and women who have served and those who are currently serving in the all branches of the United States of America. With Veterans day, a spotlight is put on the heroes of our country to celebrate the great deeds and sacrifices they made to make the nation what it is today.

On Nov. 11, 2019, Troopers from 11th Armored Cavalry Regiment showed their respect for the veterans of the past and present by participating as the color guard in the Veterans Day Parade in Victorville, Calif. The color guard led from the front of the parade setting the pace and representing 11th ACR at the event. The parade also had many small businesses, schools, and Junior Reserve Officer Training Corps programs in attendance and participating in the march.

“It was a really great experience to be a part of the gathering of veterans who have served along with my peers and veterans who are currently serving,” said Sgt. Denzel Walker, a member of the color guard who was very happy to be participating in the parade. “The parade promoted our morale and built cohesion between the civilian force and the active duty force.”

Appreciation for the military is emphasized on days like Veterans Day, allowing people to show their respect for the veterans. Walker talks about his surprise in the amount of appreciation that was shown.

“There are some really proud veterans and there are more people that appreciate what the military does, more than you realize. It’s nice to actually be out there and be recognized for serving,” Walker said.

The color guard posed for many pictures, interacted with children and spoke with the veterans. They were overwhelmed with the amount of people who wanted to talk and thank them for their service.

The troopers are prideful in their duty of color guard and they show it in their discipline with the unit and country’s colors.

“We were tasked with coming out and actually showing, marching with, and retiring our colors,” Walker said, explaining why he enjoys the color guard and the duties that come with it. “The troopers take pride because of the veterans who came before them and the actions they made to make the U.S. military what it is today. We take pride in that because those are our unit colors and that’s a part of our unit’s history and what we represent. Anytime we get a chance to come out and show the part we play in our organization we take a lot of pride.”

The heroes who have served and are serving to define our nation and its history. The veterans made sacrifices for the freedom of Americans and to protect the great nation the United States has become. They define what it means to be a hero and the world is a much better place thanks to them. To all the veterans who have served and are serving today: We salute you! ALLONS!