Athletes from the Antelope Valley, Santa Clarita and the greater Tri Valley areas participated in the Special Olympics May 2 at the Palmdale High School where they competed in basketball, track-and-field, swimming and other events.

“I couldn’t be more proud of our athletes, our volunteers, our cheerleaders in the stands and especially our military for making this such a special day for all of us,” said Palmdale Mayor James Ledford. “Even the weather is on our side.”

Enjoying the beautiful spring morning, more than 300 athletes, volunteers and fans gathered to cheer each other on. Approximately 80 military personnel who are serving at Edwards Air Force Base volunteered for the event.

Before the posting of the colors by Boy Scout Troop 39, master of ceremonies Larry Kahn assured that every abled body in the arena was standing and that all men removed their hats. His son, 1st Lt. Anton Khan, 25, is currently serving in Afghanistan.

“If it wasn’t for our men and woman in uniform, we wouldn’t be standing here today,” said Kahn, “and if they were not here today, helping us, we could not do this—at least to this capacity,” said Kahn.

Starting the party, guests were entertained by a family band, The Fulcos—Joei,18, Jesse,16, Stevie,12, and Tyler, 9, who were recently introduced on the Oprah Winfrey show by their manager Apollonia Kotero (Purple Rain).

Having toured around the world, Joei confessed, “I think this has to be the most important, most special venue that we have ever played for; my mom and I got all emotional when the Boy Scouts posted the colors, it was a little hard to sing the national anthem right after that.”

She said that the athletes she talked to and hugged, were the most beautiful, genuine and real people she has ever met. “I think they are born without a ‘hate-gene.’ It doesn’t matter if they come in first or last, they are happy and happy for each other-it’s beautiful.” 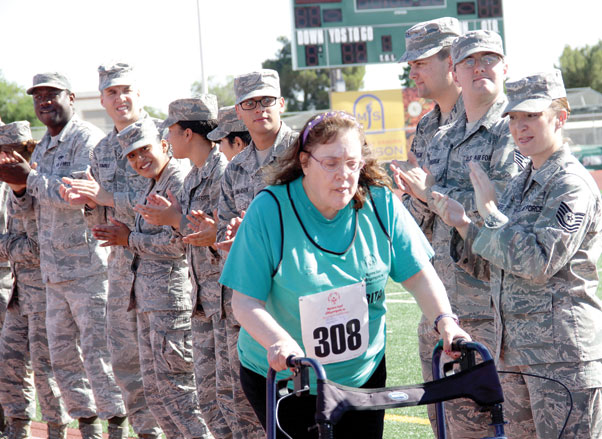 More than 80 volunteers from Edwards Air Force Base cheer on athletes during the Special Olympics at Palmdale High School. Athletes from the Antelope Valley, Santa Clarita and Tri Valley participated, hoping to advance to the Los Angeles Games in 2016.

Joei and The Fulcos delivered that sentiment when they performed the Star Spangled Banner. Guests could not conceal goose bumps and teary-eyes as Joie sang effortlessly, with passion, conviction and pride for America. The rendition was pure, simple and unadulterated.

“I’m all for artists being free to do their own thing, but this is one song nobody should be allowed to go all ‘Maria Carey’ on,” said her father, Joey, who along with his wife Vanessa, raised their children to respect the flag and all those who serve.

Donna Wilson, director of fundraising and local area games coordinator for the Antelope Valley, presented Mr. and Mrs. Kahn a certificate of appreciation for their ten years of dedication. Their son Alex Kahn, 21, was also volunteering as MC.

Moving out of state, Terri Kahn said she is sad that this may be their last year of volunteering.

“Every year is special and new; it grows and every year you meet new, wonderful athletes and volunteers. A man from Edwards just said he would like to parachute on the field during open ceremonies with the flag next year—that’s pretty awesome!” From all the charities that they support, “this is our most special,” she added.

Having three Special Olympic athletes of her own—Ian, Christopher and Vanessa—Donna Wilson coaches’ basketball and rhythmic gymnastics in the spring and bowling and softball in the fall. She started attending as a parent in 1999 and her family became very involved in 2000.

“Much of the success of this event is given to the volunteers from our military at  Edwards,” says Wilson, “without their support with organizing volunteers, assisting with competition of the athletic events, set up, and clean up, we could not have been able to offer such an exciting competitive event that the athletes enjoy.”

Deneese Thompson, regional coordinator and area director has been volunteering for 25 years.

“It’s a family thing,” she explained. Her daughter Kimberly is a training director and has been volunteering since she was 11. Her grandson, Avery, 8, is now volunteering and her son Daniel, 33, is a Special Olympic athlete participating in track, soft ball and bowling.

“I could never do this without the help and support of my husband (Fred Thompson, Palmdale Councilman). If I didn’t have him to back me and pick up the slack, we couldn’t do this as a family.”

According to a Special Olympic website, approximately 7,000 athletes and 3,000 coaches representing 177 countries, along with 30,000 volunteers and an anticipated 500,000 spectators will participate in the 2015 Special Olympics World Games in Los Angeles, July 25-Aug. 2. Next year’s Antelope Valley event is slated for April 30.

The Falcos will be performing at 10 a.m. May 16 at Harley Davidson in Lancaster during Neilstock 2015. Tickets cost $10, but the music and art festival is free to all active military with ID.