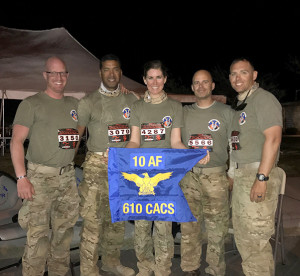 Thirty years ago, she was dancing on her grandfather’s feet. This month, she marched 26.2 miles through deep desert sand and over mountains carrying a 50-pound ruck sack with four comrades in arms, in his honor.

For 2nd Lt. Amber Schoenberger, memorializing the memory of her grandfather, Army Air Forces Cpl. Willard Edwin Howard was not just a family thing. She was also in full military uniform, leading enlisted members of her new Reserve unit to commemorate the 75th anniversary of the Bataan Death March, on March 19, 2017, at White Sands Missile Range, N.M.

“I could never understand the magnitude of the Bataan Death March as a little girl and therefore could never really show my gratitude or empathy for what my grandfather endured – nor would he have ever wanted anyone to acknowledge him for that event, either – but this was really a way that I could take action to show respect for him and a higher level of understanding of his suffering,” said the 35-year-old lieutenant, who was one of very few women her age to complete the marathon in full uniform with a rucksack.

After the U.S. surrender of the Bataan Peninsula on the main Philippine island of Luzon to the Japanese during World War II on April 9, 1942, the approximately 75,000 Filipino and American troops on Bataan were forced to make an arduous 65-mile march to prison camps. For 28 years, this tragic event has been memorialized at White Sands, New Mexico, with as many as 7,000 military and civilian marchers. With 1,500 foot elevation changes, 87-degree temperatures, and strong wind, it is one of the most challenging marathon courses in existence.

“Even though he has passed away, my grandfather continues to inspire me. He was only 18 when he was forced to march in Bataan, and yet he came back from all of that to have a family and love and laugh often. I sometimes can’t get over that perspective … He was only 18 years old.” 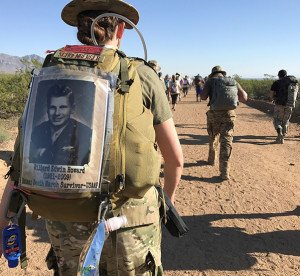 Schoenberger, who is president and owner of a construction and development company in Tempe, Arizona, also serves as the director of mission support at the 610th Command and Control Squadron at Davis-Monthan Air Force Base, Ariz. When she learned other unit members were planning to attempt the event, she simply had to do it with them. Her beloved grandfather had endured the march in 1942, and his legacy has inspired her military service and many other things – including her zest for life.

“Being new to the Air Force, I was so honored to be able to wear the uniform for this memorial marathon and don my grandfather’s photo next to my very name tape … I remember dancing on his feet as a little girl and now some small part of me has been able to follow in his footsteps of service and love of country.”

The team she led included Air Force reservists: Master Sgt. John Herrick, who has completed three other marathons; Tech. Sgt. Trevor Petersma, who completed the Air Force half marathon while deployed in Iraq in 2008; Tech. Sgt. Delbert Templeton, a prior Marine; and Staff Sgt. Tyrone Hawkins, an avid cyclist.

Herrick, who was marching to honor Army Sgt. Joel Clarkson, said this marathon was by far the most challenging he’s completed. Clarkson was a Ranger killed in the line of duty during Herrick’s special operations combat camera deployment to Afghanistan.

“His friendship helped me through the most difficult period of military service in my 22-year career, so it was helpful to remember his ultimate sacrifice and how my difficulty paled in comparison,” said Herrick, whose own family’s military legacy also spurred him to rally the team for the march. 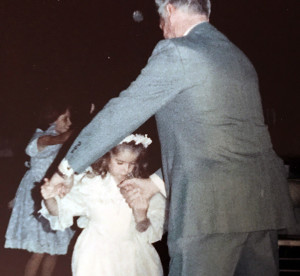 For Hawkins, it was more of a mental challenge than a physical one, and keeping the actual Bataan survivors in mind during the 10-hour event kept his will to complete the marathon intact.

“At least we don’t have to worry about getting shot and no one was going to bayonet us,” he said. “That kept me grounded and focused, if I kept moving forward I could get through it.”

All the unit members conveyed a sense of pride about being able to do it with their unit guidon, which has now inspired others in the unit to join them next year.

“This has been a challenge I’ve wanted to complete for years,” said Herrick. “This unit seemed to have the right type of people who would be willing and capable of completing it. If you talked to any millennial, or anyone twice removed from the Greatest Generation, they likely won’t even know what you mean when you say the Bataan Death March – so this memorial marathon is a very important tool to help current and upcoming generations remember what these men did for our freedom.”