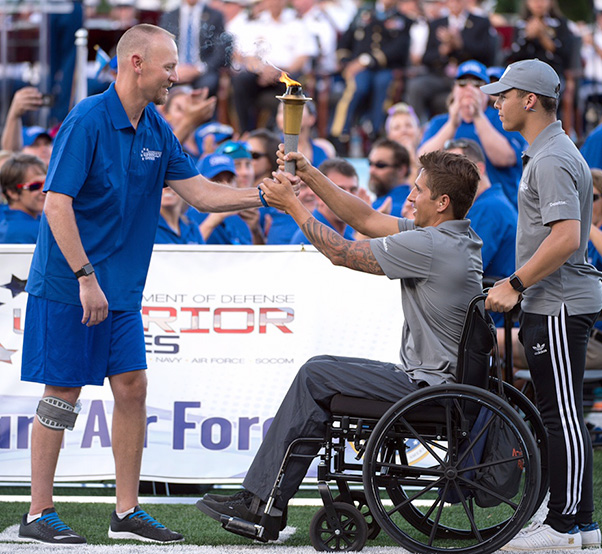 The 2016 Department of Defense Warrior Games began in West Point, N.Y., when Army Capt. Kelly Elmlinger, with help from comedian Jon Stewart, lit the official torch during the event’s opening ceremonies at the U.S. Military Academy.

“Being selected to light the torch is as much an honor and privilege as competing for Team Army,” Elmlinger said. “Finishing my Warrior Games career as Team Army captain and lighting the torch at the opening ceremony is by far the most amazing experience. It’s humbling to see the support from the (U.S. Army) Warrior Transition Command throughout my time on Team Army, and I graciously thank them for allowing me to participate as torch bearer in this event.”

Tenacity
During the ceremony, Stewart said he doesn’t come to support the wounded, ill and injured athletes but to get support.

“(Considering) Orlando, this has been a difficult week for what I like to call team civilization,” he said. “The horrors we witnessed can make you feel as though you’ve lost faith in our ability to persevere through those times. When I say I’m in need of your support there’s almost nothing in this world that gives me more support than witnessing the tenacity, the resilience and the perseverance of our wounded warriors in their endeavors. They’re the ones that make me feel like we’re going to be okay.”

Stewart said he brought his 11-year-old son, Nate, so he could meet the wounded warriors firsthand. 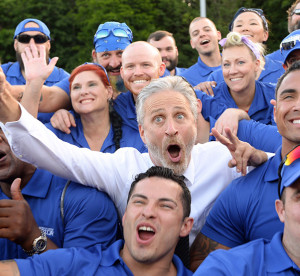 Comedian Jon Stewart, most notably of The Daily Show, poses for a photo with the Air Force team during the 2016 Department of Defense Warrior Games on June 15, 2016. Stewart emceed the opening ceremonies for the games.

“I’ve seen what these individuals have to go through. They have faced the worst that humanity has to throw at them, and they decided not to allow themselves to be defined by that act but to be defined by their actions following that act, their actions of getting up off that floor. I’ve seen the blood, sweat and tears they’ve gone through to get here, and the profanity. If you go to the physical therapy room at Walter Reed, there’s a lot of profanity,” he said with a smile.

“They do it with pride and when they fall, their colleagues and their loves ones pick them up and don’t let them give up, so I applaud the families and the caregivers here today,” he added.

Resilience
Army Lt. Gen. Robert L. Caslen Jr., the Military Academy superintendent, said he was honored that the Academy is hosting the Warrior Games and quoted The American Veterans Disabled for Life Memorial in Washington, D.C.

“It says, ‘It’s not what you lost that counts. It’s what you do with what’s left.’ That’s what these games are all about,” he said. “We’re here to celebrate ability, to celebrate resilience and to celebrate the drive to overcome adversity. These games showcase the resilient spirit of these warrior athletes. They symbolize that all wounded, ill and injured service members and veterans can recover from serious injuries or illnesses and lead fulfilling, productive and inspiring lives. 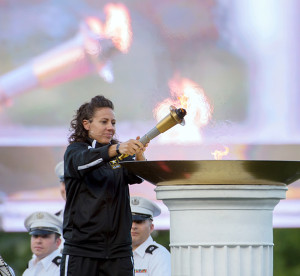 “As these warrior athletes take the fields of friendly strife, they will show the world their indomitable spirit, their sportsmanship, their desire to excel, their tenacity and most importantly, their strength of character,” Caslen continued.

Caslen had a special message for the athletes, families and caregivers.

“Athletes, you are a testament of strength, professionalism and dedication not only for the other survivors around the world but also for all of us,” he said. “You are our role models. You are our inspiration. You are our heroes. And to the family members and caregivers, your support of these athletes has been essential throughout their recovery and rehabilitation. You’ve been a vital source of encouragement and motivation to them and that will be just as important as they compete in these games over the next few days.”

“On behalf of myself and all of my fellow wounded warriors, we would like to thank you for your service and the service of all Vietnam veterans,” Sanborn said. “Your fight to remain on active duty after being wounded helped make it possible for current wounded warriors to continue to serve.”

Franks, who is a below the knee left-leg amputee, said he was very touched.

“I was very moved and am deeply appreciative and inspired to be here to receive something like this on behalf of all my fellow wounded warriors and in the company of such great Americans,” he said.

During Desert Storm, Franks commanded the 7th Corps, leading 146,000 U.S. and British soldiers in an 89-hour, 155-mile attack as part of the coalition that liberated Kuwait. 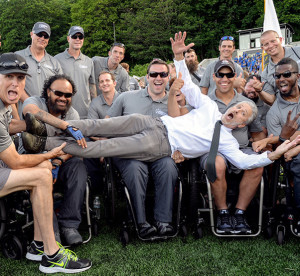 Comedian Jon Stewart, most notably of The Daily Show, poses for a photo with the U.S. Special Operations Command team during the 2016 Department of Defense Warrior Games on June 15, 2016.

“I felt honored and privileged to be able to do that as an amputee but I wasn’t thinking about being an amputee while that was going on and that’s the whole idea,” he said. “You don’t focus on that. It’s not what you don’t have; it’s what you have that counts. It’s getting back up and going on that counts.”

Stewart encouraged disabled service members and veterans to give adaptive sports a try.

“What I’ve found in talking to men and women who got involved with the military is that they are goal oriented,” he said. “They thrive on the idea of an end result. What are the things you miss when you’re not in the Army? You miss the camaraderie? You miss the action? You miss the goals? These are the things the games provide, and they help give people a sense of purpose again, make them feel like they belong somewhere. I’m still me; I can still compete. I think that part of it is really important.”

The Warrior Games was created in 2010 as an introduction to adaptive sports and reconditioning activities for service members and veterans.

Adaptive sports and reconditioning are linked to a variety of benefits for wounded, ill, and injured service members across all branches of the military. Benefits include less stress, reduced dependency on pain and depression medication, fewer secondary medical conditions, higher achievement in education and employment, and increased independence, self-confidence, and mobility.

Admission to Warrior Games competitions is free and open to the public.