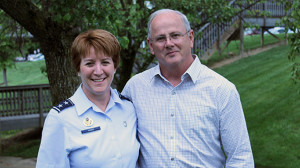 Growing up in a family of 12 children, Jeff was raised in a patriotic home. During World War II, his father moved the family to Michigan so he could help build B-24 Liberators to support the U.S. military.

Born in the Appalachian Mountains of Kentucky, Jeff moved to Ohio at the age of 17 to help his older brother care for his two children and began to learn the basics of family care.

In 1977, Jeff decided to enlist in the Air Force and became an aircraft weapons mechanic. His first assignment was at Pease Air Force Base, N.H. A few months into his Air Force career, he met Dorothy.

“I was persistent if nothing else,” Jeff recalled. The two married in 1979, while Dorothy was still in college. By the end of 1983, she decided to join the Air Force. “We’ve been running around ever since,” he said.

Family first, people always
While many people focused on their careers, Jeff said they always focused on family. During the time both were on active duty, he recalled being asked about duty location preferences. “They would ask, ‘Where do you want to go?’ We always said, ‘We don’t care as long as we go together,’” he said.

Jeff and his wife have two daughters who are now adults. “(Dorothy) and I are both the first in both families to finish college. We wanted to make sure our kids knew how important education was,” he said.

“We have been very fortunate to be at the right places with the right people at the right time,” he said, adding that wherever the road takes a person, they must take an active approach to find what they like about the place and people. “That’s been our philosophy for 37 years,” he added.
Jeff said the most rewarding part of his active-duty career was serving as a first sergeant and having the opportunity to counsel and help.

He said he always told people, “Be happy with who you are, you are the only one who can (control) it. If you’re not happy, make a change. Get to your happy place. Why go through life being miserable?”

Military spouses’ club
In 2004, Jeff made the decision to get involved in the military spouses’ club, known at the time as the wives’ club. He became active because he wanted medics to become more involved. “I got involved to help people and help spread the word,” he said. “This is my way of contributing what I can.”

The spouses clubs are involved in a variety of charitable causes. Among other things, members run the thrift shops on base, raise money for scholarships and donate to many causes. The Air Force’s spouses clubs raise an average of $600,000 each year for Air Force Aid Society.

In addition to charitable causes, spouses clubs promote comradery and provide the opportunity for military spouses to get involved and meet other spouses.

This is his eighth year of being on the executive board for various spouses clubs.

Jeff shared that fostering friendships with other military spouses can be a great source of support. When he was new to the spouses club, he reached out to a senior spouse and said, “I need a mentor.” The senior spouse became his mentor and they have stayed in contact for almost 10 years. As the days and years passed, his mentor started coming to him for advice.

“I went from needing help, to giving advice,” Jeff said. “It all started with me raising my hand and saying, ‘I need help.’”

Males, females share stress equally
When it comes to being a military spouse, Jeff said it’s important to understand spouses not on active duty share the stress of service with the active-duty member. “If your spouse is in combat, you’re in combat whether you realize it or not. When they get hurt, you hurt with them,” he said.

When it comes to male spouses, their needs as a military spouse are sometimes overlooked.

He explained there is often a misconception when it comes to male spouses, especially during deployment of their active-duty spouse.

“We go through the same emotions as a woman does … that’s what people don’t understand,” he said. “We tend to react and handle them differently. Sometimes we internalize … inside it’s all the same … we worry about the same stuff.”

“Get involved. Do some good,” he said. “If you’ve got something to offer, don’t let something like being the only male stand in your way. Don’t worry about what other people think. Worry about you and what you have to offer.”

Families with children
Between both of their active-duty military careers, the Hoggs have gone through 22 household moves.

“People don’t realize that in itself is a big stress,” Jeff said. “It was difficult constantly taking our kids away from family and friends.”

The biggest challenge was getting their children to understand that their parents could have to leave at any given time. Not wanting them to worry, the Hoggs always told their daughters, “Mom and dad have to go to work. We will be fine and we will be back.”

Jeff said, “It was hardest on their mother and me. The children didn’t understand, but we did and we knew anything could happen at any time.”

Military spouses are important and play a primary role in the family structure. Jeff said in order to be strong, a spouse has to find out who they are and take care of themselves first. When they realize who they are and where they fit in, they’re able to give from a place of strength.

As he transitioned away from active duty, his identity shifted to being the relative of an active-duty member.

“I’ve had to accept that role,” he said of the challenge adapting to his new position. “I’ve grown into it. I make sure people know that even though I am Gen. Hogg’s husband, I’m still me.”

Many spouses struggle with a loss of identity. According to Jeff, spouses should remember to make their self-care and identity a priority. “How can you do something for someone else if you don’t know who you are?” he asked.

He stressed the importance of maintaining your identity and remaining strong as an individual as spouses are more than an extension of their husbands or wives. “Treat people like individuals not just as the spouse of someone else,” he said.

Volunteering with the spouses club at the base thrift store, junior and senior spouses often work together. “Sometimes junior spouses are shocked to realize we are just normal people,” Jeff said. “They will talk to you and find out later on who your spouse is and say, ‘Oh my, I did not know that.’ That’s the point. It’s all about getting to know people before you know who their spouse is.”

Reflection and advice
Jeff said he’s proud that his wife has met every goal she set in life. She never took “no” for an answer and never quit. When faced with adversity, she kept going.

“I remember when my wife came into the service,” Jeff said. “Friends couldn’t believe it … they would say to me, ‘I can’t believe you let your wife come into the service. First of all, I don’t let my wife do anything, she does what she wants. I support whatever she does. To me that’s what it’s all about. She supports me and I support her. That’s why we’ve been married 37 years.

“In the military you’ll see a lot of people working on their careers,” he continued. “(For us), our marriage is our career. It needs to be worked on all the time. Don’t forget to work on the little things with each other. Work on that relationship … because if you keep that relationship happy the rest of it will fall into place.”